The ecological turnaround of towns

Some reflections on and real action for sustainable urban mobility

FLOWS – The climate change we’ve been seeing in the last few years shows the urgency of making considerable modifications to our daily habits so that more sustainable, environmentally-friendly behaviour can be introduced. Urban areas, spaces with a high resource consumption rate, have a central role in this context yet they are also places where sustainability policies can be tested on a large scale. Mobility is certainly one of the spheres of greatest intervention. Matteo Dondè, the architect and urban planner, coined the expression “Let’s give people road” to describe the changes that must now be made within urban contexts to promote active, sustainable mobility, at the expense of using the car. As sustainable mobility expert and Sole Director of the Agenzia per la Mobilità di Modena (aMo – Modena Mobility Agency), a position held until June 2022, what action do you think institutions can implement to stimulate sustainable mobility?

ANDREA BURZACCHINI – The turnaround in mobility is certainly an essential contribution in the fight against climate change and towns have an important role in this as we see both the problems in them and then the answers. The turnaround in mobility consists of reversing the current modal split of urban journeys. Today, ⅔ of journeys in an urban context are made privately and only ⅓ sustainably (on foot, by bike or Local Public Transport (LPT)). What can we do to invert these proportions? The most effective method to encourage citizens to leave the car at home is to change the roads in favour of active mobility – reduce the space for vehicles, both moving and parked), adopt a limit of 30 kph, increase the cost of parking, increase the space for pedestrians (starting from wider, less-damaged pavements), take bikes into the road building bike lanes, which cost less than purpose-built cycle paths and won’t be more dangerous if the speed of vehicles is drastically reduced. And then give space and preference to public transport vehicles, not only fast track lanes but also, just to give an example, allowing public transport vehicles to change traffic lights to green for them as they approach thus improving the commercial speed and increasing their attraction.
These measures make using the car less easy, less immediate and more expensive. The paradox is that in towns that successfully implement a turnaround in mobility, a journey by car is more enjoyable when it has to be made because there are few obstructions and the traffic flows.
All that we’ve said has an enormous impact on climate change, air quality and noise in towns, use of space, people’s health, the number of road traffic collisions in towns (it shouldn’t be forgotten that Italy is one of the European countries with a higher number of fatal accidents in towns, a problem ignored by our institutions).
It’s also a question of people’s freedom if private traffic is limited; children, the elderly and the handicapped will be able to use roads with greater democracy.
Lastly, it’s an economic question. The fact of being forced to own at least one car per family has an enormous impact on our pockets. A car costs from Euro 300-700 a month, money spent on something designed to move but stays parked most of the time. A car is also expensive for municipalities. At the start of the 21st century, research was carried out in Europe which showed how, for vehicle-based mobility, municipalities spend three times as much as they make from cars.

RF – Cultural barriers towards Local Public Transport are one of the main obstacles to the success of sustainable mobility policies in Italy. LPT is often perceived as being of poor quality, unable to respond to users’ needs or, in any case, not easy to use. How can these widespread convictions be discredited? How can a reversal in the trend be generated in urban contexts, such as Modena, which still strongly feature the ‘car culture’?

AB – Basically, four things can be done. The first is that Italy must fund LPT much more than it currently does. Each of us can easily realise that there are buses every 5 minutes in any European town and LPT remains active until late in the evening, even in small urban centres. This doesn’t mean that they’re better organised but there is more money. Secondly, the municipalities can easily improve the speed and attractiveness of LPT when they implement preference measures for public transport vehicles, for example, by not making them subject to car traffic. These solutions can’t be adopted outside towns but they can be introduced at the entrance and exit to them. And we shouldn’t forget that faster LPT is obviously less expensive as, compared on a like for like basis, it needs fewer trips and takes less time.
The third thing is to overcome the enormous rigidity of the fares. Greater integration between rail and road, urban and out of town, greater clarity about, ease and availability of tickets and, therefore, greater attraction of LPT. We have a great deal to do on this in Italy, not just locally but also and especially nationally. Just think that there are different ticket machines for Trenitalia and Italo in all the main stations we know. There are only two companies over long distances and they’re unable to talk to each other. On the contrary, there are many more national companies in Great Britain. The user just accesses a single website where they can find the various journey combinations to reach their destination and pay just once, with no distinction between the various transport companies they will use during their journey.
The fourth thing is something I fought strongly for as Sole Director of aMo. Administrations and LPT operators are convinced that public transport must only guarantee minimum services. This means that, in the end, LPT is only designed for commuters or, where there’s less cover, for High School students. Even today, LPT is assessed by its ability to get students to school on time and, during Covid, the amount of space between those students in various Italian municipalities. The message perceived by 17-year-olds is that public transport will only be guaranteed for them while they go to school and then they’ll have to buy a car. This is wrong because it generates a culture where LPT is only for those who can’t afford a car or because of age. Unfortunately, this happens not only for urban services but also for regional transport. As Sole Director of aMo, I tried to fight so that there was, for example, an evening LPT service in Modena, something which is still lacking, unfortunately.

RF – As Sole Director of aMo, you’ve supported and contributed to the fulfilment of a study on the assessment and re-organisation of public transport in Modena. What are the benefits of the new LPT design for the city? What influences can work mainly centred on the urban context also generate in the province? More generally, how does a good LPT re-organisation project contribute to the evolution of a medium-sized town?

AB – The study we carried out on behalf of the Municipality of Modena was to produce a new LPT network based on four main lines, corresponding to the so-called backbone lines. Some sections were indicated which will be covered by Rapid Transit Buses (RTB), almost all in their own lane and completely fast track. As a result of the latest innovations and evolutions, the RTB service will be provided by large, high capacity and high frequency electric buses. In this way, Modena will have two-level public transport – 4 RTB lines and secondary lines that reach the points of the city not touched by the main lines. The authors of the study designed these lines taking into consideration the main points of interest in the city. Therefore, the lines will unite the most densely populated areas with the hubs of attraction in the historic centre, hospitals and the station. We hope this new LPT design will increase the attractiveness of Modena, also generating an impact in the province. The RBT terminuses will be near to the hubs, arranged in a sunburst around the city, and exchange car parks and mobility points will be assigned to them. Hence, the terminuses will be points where people going to Modena from the province can leave their car and some out of town public transport lines will stop, facilitating the change from the out of town vehicle to the urban, high frequency, rapid one. This is a design which is very widespread in Europe and, on one hand, prevents out of town buses from entering towns creating additional traffic and, on the other, allows out of town LPT transport greater frequency in its relevant area.
In addition, the RTB is especially efficient because it’s economic and fast to create and flexible in relation to possible urban planning developments in the coming decades. Modena has seen inefficient urban planning in the last 50 years. The city has spread like wildfire and, for example, the choice was not made to concentrate residential areas on the main roads. Today, population density is very homogenous and, as a result, a greater number of lines are needed to serve a sufficient portion of population.
The belief that the turnaround in mobility will lead to a to a kind of degrowth (whether happy or unhappy) of cities is still particularly widespread in Italy. In actual fact, reorganisation in sustainable mobility terms, of which LPT reorganisation is an essential cornerstone, generates more dynamic towns good to live in, able to attract young people, new ideas and functions, and capable of improving the town from the cultural and economic point of view. 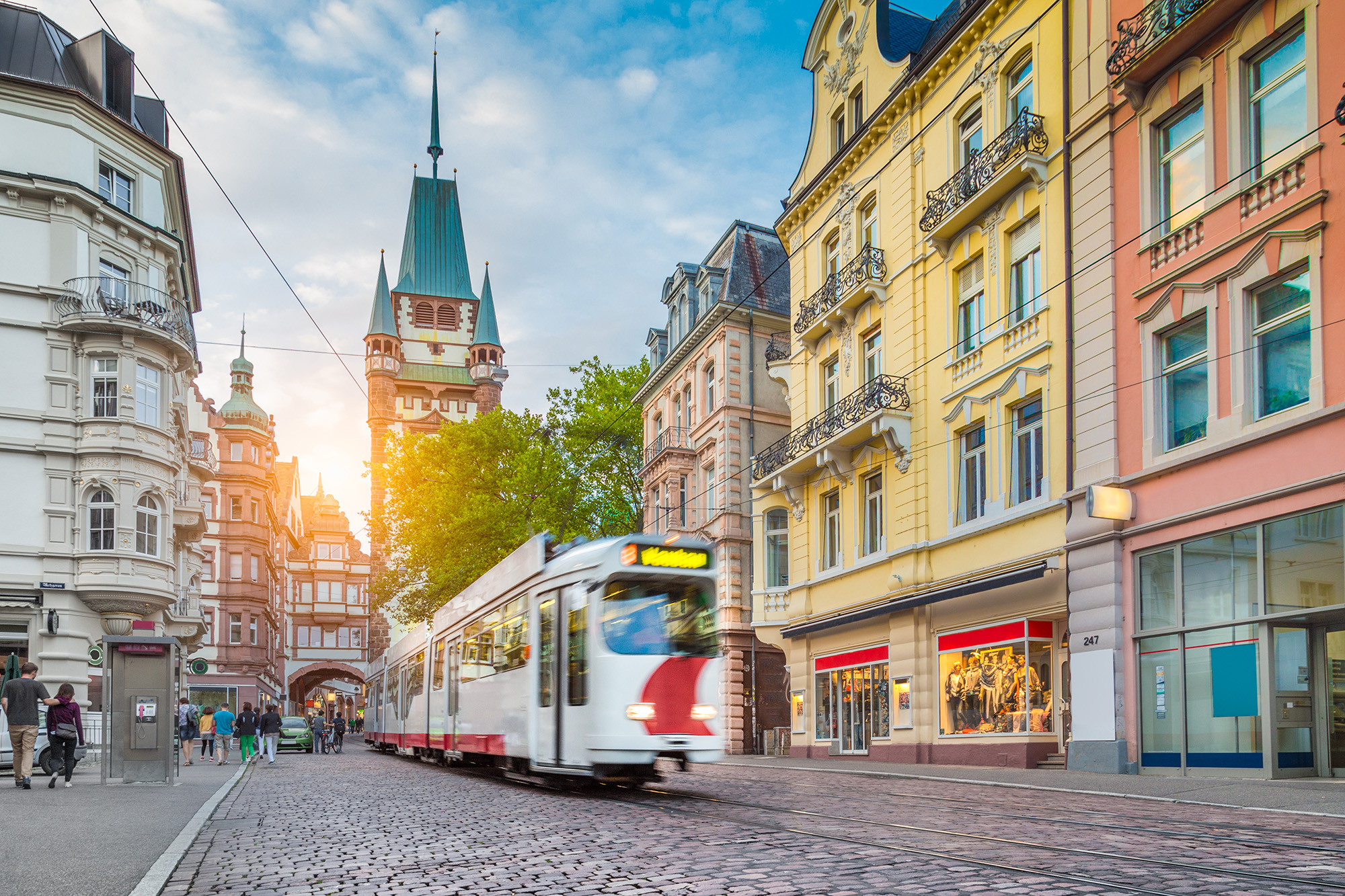 Freiberg, where I live, has made radical choices in terms of mobility, effectively blocking any type of development based on the use of the private car. Despite this, but it could also be said that it’s in spite of this, it has gone from 185,000 inhabitants to the current 230,000 in 30 years. It’s one of the towns with the lowest average age in Germany and people also choose to live in Freiberg because work can be found. This means that towns which have taken paths in favour of sustainability are producing places of work, economic success, new potential and new markets.

Andrea Burzacchini is an expert in mobility and sustainable development. He has lived in Freiberg, Germany, for more than 20 years, where he founded aiforia, sustainable development agency. He has taken part in and co-ordinated projects in more than 20 countries and planned and run more than 150 guided tours/training in Freiberg on mobility and sustainability. He was a commuter (by train) between Freiburg and Modena, where he was appointed Sole Director of aMo - Agenzia della Mobilità (Mobility Agency), from 2016, concluding the assignment in June 2022. In 2020, he founded the initiative ‘OBIETTIVO 2/3 - per una svolta nella mobilità urbana’ (OBJECTIVE 2/3 - for a turnaround in urban mobility) in support of Italian municipalities and provinces.