Towards the future of shared mobility

The NEXT modular system

Taking public transport to the ‘NEXT’ level

Modularity and flexibility of LPT in the urban context

NEXT is an innovative experimental system devised to create a ‘flexible, scalable, shared, autonomous and green mobility service’. Throughout 2021, NEXT has tried out its vehicles in real traffic and, subsequently, at Expo 2020 in Dubai, it has tried specific business models easily adaptable to this innovative transport system. After the intense test stages, FLOWS collected the reflections of Tommaso Gecchelin, founder and inventor of NEXT.

FLOWS (F) – If we wanted to give a summary description of what ‘NEXT’ is, we would say that it’s an intelligent transport system based on modular electric vehicles. Each module can couple and uncouple from the others while crossing our cities. It’s a type of flexible, economic and sustainable mobility and that’s why it’s especially interesting for people who are currently involved in planning the public transport of the future. Padua was chosen as the city to test NEXT in an urban context from July to November 2021. What were the results in this first period of on-the-road trials? 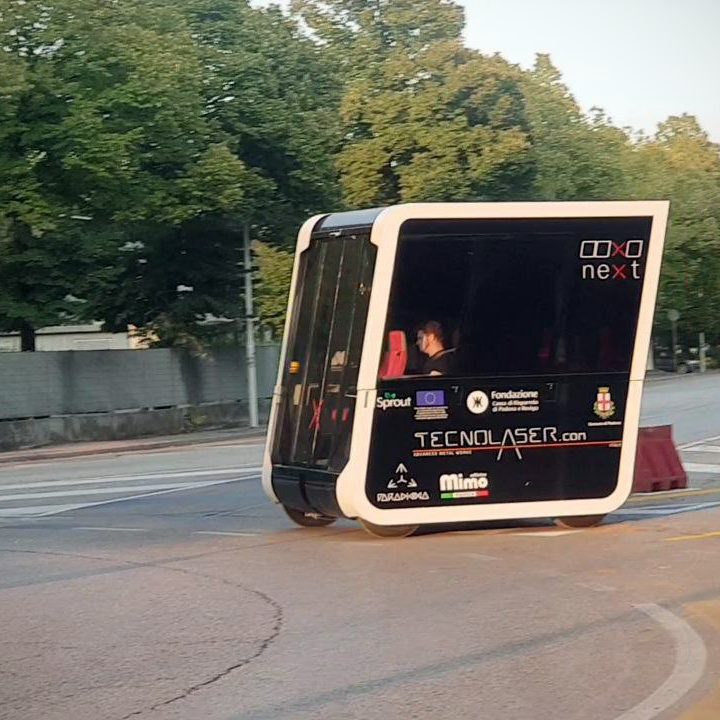 Tommaso Gecchelin (TG) – The NEXT test in Padua was divided into two stages. The first was carried out on Via Longhin with the aim of checking some of the vehicle’s technical functions. The second, which mainly concerned Via Tommaseo between the Trade Fairground and the bus station near Padua railway station, was to try out the main feature of NEXT, i.e. the modularity in mixed traffic on one of the main city roads, along a route similar to that of a real public transport service. During the test period on Via Tommaseo, we observed interesting parameters on consumption, internal comfort and the coupling/uncoupling performance between moving vehicles with users on board.

The existence of passengers, i.e. co-experimenters who had signed a specific waiver for the purpose of the trials, was certainly an interesting element as it enabled us to look into the travel experience with objective methods (recording the noise and vibrations, just to give one example) and open questionnaires. We were thus able to gather information on subjects such as the acceptability of the service, with the possibility of comparing the answers to the same questions posed before and after the test. The results on the perception of the effective possibility of implementing the service were interesting; before climbing onboard, users felt that it would be difficult to implement NEXT modules in the short term but after the test, the perception changed completely and the evaluation of almost all the co-experimenters was that the service could be instituted straightaway because they had been able to try out a fully functional vehicle. During the journey, many saw the coupling/uncoupling of the vehicles, something we discovered was thrilling for those travelling on them. Generally, the feedback was positive.

The trial also allowed us to trace carefully the advantages of the modularity of the system. We conducted special studies at the same time as the road test to understand how to use NEXT vehicles efficiently in the context of public transport for Padua. Starting from the data on the variation in demand at different times of the day supplied by Busitalia Veneto, we saw what happens if we vary the number of modules coupled together during the day. So we saw that it could be functional to couple 5 modules during the 7 am peak time to then use a lower number of vehicles at off-peak times before returning to 5 vehicles for the evening rush hour. Therefore, the option of being able to choose how many modules to adopt according to the effective demand allows considerable savings to be made from both the energy point of view (we’re talking of a minimum saving of 20%) and, clearly, economically due to both the load of the vehicles and the batteries. The modularity enables the vehicles to be charged by rotation during the day and have them always ready for the evening peak. This is something completely new for electric vehicles for public mobility – a bus that must also ensure a service during off-peak times can only be charged at the end of the service. This means that a battery able to sustain the planned hours of service, usually 8, must be envisaged. For NEXT, the battery can be sized for 2 hours of service, thus obtaining a saving on the purchase of the battery and greater vehicle capacity.
However, the most important result of the trial concerned the confirmation that a modular public transport service is not only feasible but also effective and efficient without affecting onboard comfort (the coupling/uncoupling of vehicles in movement is smooth and instantaneous). And this is something completely new.

5 Nexts coupled together, used instead of a 12-metre bus during the peak hour. At off-peak times, just one vehicle continues the bus service on that line while the uncoupled Nexts can be charged or used individually as a vehicle in car-sharing as each module can be driven with a ‘B’ class licence

F – NEXT is also currently at Expo 2020 in Dubai. What is its role there? What are your aims for this specific test experience? 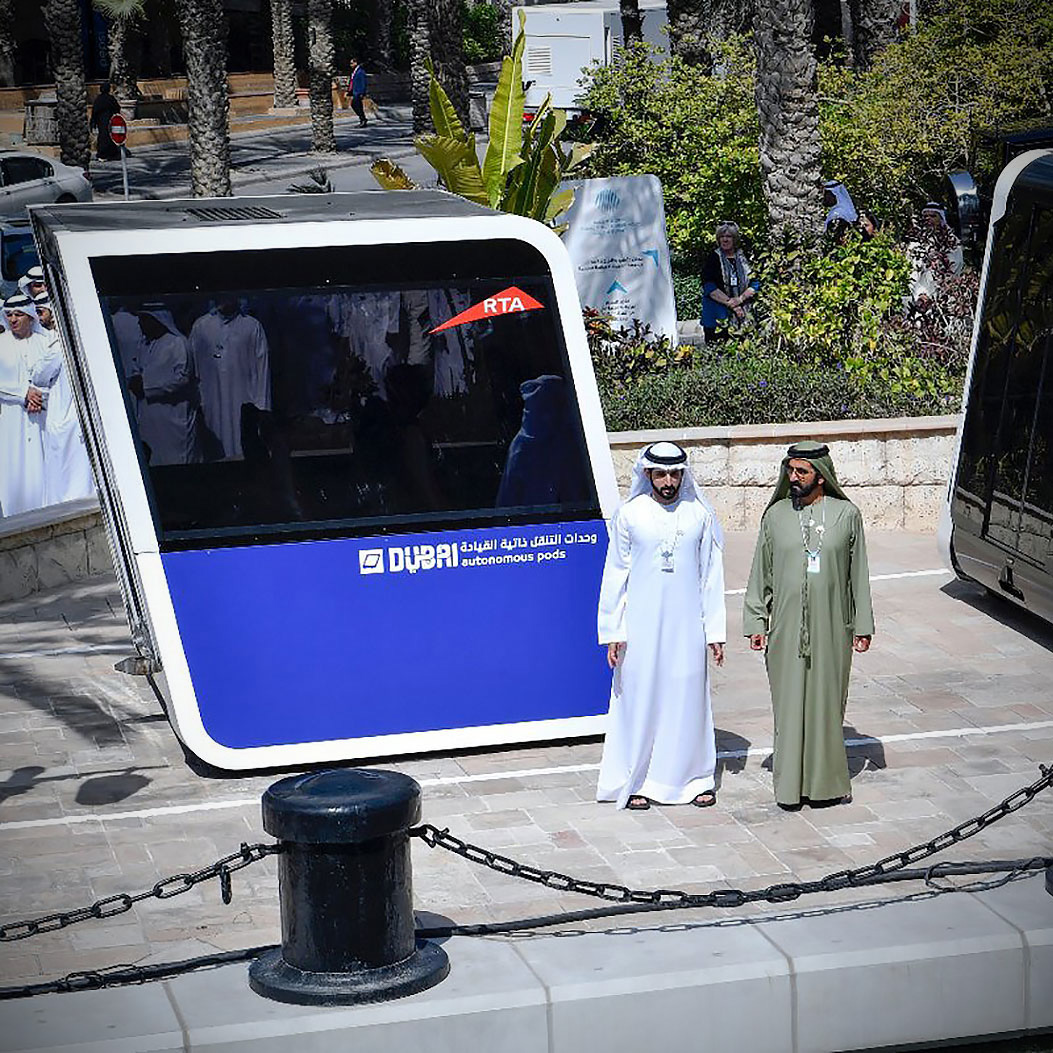 T.G. – We have 5 vehicles at the Expo 2020 in Dubai aimed at showing how a modulable transport system can be suited to different business models. In this case, the scenario falls outside public transport and, instead, refers to retail in movement/services on demand-at home. The vehicles are branded by a sponsor – each module turns into a shop that theoretically arrives at the customer’s home allowing them to test products and received the consultancy of a dedicated expert. In addition, modularity in itself has the ability to have different spaces and functions for each unit coupled up. However, the retail in movement business model can be integrated with public transport – for example, we’ve thought of a ‘bar module’  coupled to modules for carrying passengers which is available to them for the whole of the journey. What we’re trying out in Dubai is helping us to understand whether, given the internal spaces, the modules can be set up for retail. And the response is already positive.

F – Seeing the results and reflections triggered by the significant trials that NEXT has been able to undertake in 2021, what basic features do you think future forms of public mobility must have?

T.G. – The subjects of modularity and flexibility are central. The trial confirmed that these two features are liked and ‘understood’ by users. Another two interesting aspects are the scalability of solutions and the fact that they can operate without specific infrastructure. For example, every NEXT module has been designed for autonomous driving. At present, this feature can’t be applied in Italy for regulatory reasons. If a body should choose to lease or buy NEXT vehicles, it would have immediate advantages arising from the modularity and flexibility and, when autonomous driving becomes legal in Italy, it will already have vehicles set up for this type of technological evolution. Therefore, scalability means investing in tools and services that already exploit technologies that can be gradually strengthened. In addition, a modular vehicle allows a move towards those people who still find it hard to use public transport rather than private mobility as this type of mobility is much closer to private mobility than a standard bus or tram. Thus, it’s an answer which enables the gradual approach of public and private, trying to turn around the tendency to take the private car at all costs and thus potentially contributing to the resolution of the current mobility problems.

F – As inventor of NEXT, what do you think are the current obstacles and the opportunities to lever so that innovations in public transport in Italy can find fertile ground for both the test stages and a quicker spread and use?

T.G. – The limitations are caused by the fact that, on test plates, the vehicles can’t provide a public transport service in the strict sense but only carry co-experimenters. A bureaucratic and regulatory answer must be found that allows experimental vehicles to carry passengers to make the test stages more effective.

Designer and Physics graduate, Tommaso Gecchelin spends all his time on the creation of products and services inspired by his scientific training and centred on the user’s needs. After years of international experience in the design of innovation sector for many companies around the world, he is now the founder and inventor of NEXT.