What city for what future?

A look at post-modern and contemporary metropoles
Interview

Views, models and opportunities for the requalification and development of the area

Mum told me I wasn’t to go to the station

Engineering design and valorisation of the area

For a number of years (perhaps decades), many Italian stations were rather neglected, often degraded places where it was difficult to feel safe in non-peak times. Is it still like that? RFI and various local bodies have recently started the transformation and re-assessment of stations throughout Italy. We talked about this to Mario Cagol, Process Director of Strutture Trasporto Alto Adige (STA), and Andrea Giaretta, Works Director and Safety Co-ordinator in public contracts for the construction of roads and railways, with special reference to the new Mobility Centre project in Brixen (BZ).

FLOWS – The Rete Ferroviaria Italiana (RFI – Italian Railway Networks) website states that stations have accompanied the evolution of the area they were built in since their inception in the 19th century, complying with changes and emerging needs, becoming the driver of urban planning. Therefore, stations should be thought of not only as spaces designated for movement, travel and exchange but also as places able to stimulate and accompany “the evolution of the urban fabric”. Each station, large or small, therefore has the potential to generate positive effects in its area. How can engineering design contribute to transforming stations into places able to participate in the quality and attraction of the context they are part of?

Mario Cagol – The station is a town’s visiting card. The challenge that engineers are required to face lies in knowing how to design a place able to gradually accompany each traveller getting off a train towards the urban context. To do this, the station must express the identity of the place in which it was built and, at the same time, have features that make it welcoming for those arriving. I’m thinking, for example, of how a beautiful environment is more attractive and captivating than one that isn’t. Therefore, as engineers we are called on to design taking account of not only the function but also the beauty – a beauty that is not acquired but generated in the project.
“What’s beautiful is difficult,” said Plato in What is Beauty? He maintained that when we meet something  beautiful, we’re able to move upwards from our particular, incidental world towards the universal world of ideas. Therefore, beauty is an opportunity for the propulsion of thought. A project is beauty when it’s able to go beyond the most immediate, obvious, answer, choosing to question itself to generate the best possible response. This is the engineer’s task – solving each problem by using intelligence.

Andrea Giaretta – This is the direction taken for the construction work of the new Mobility Centre in Brixen railway station, devised not only to increase the public transport offer but also, first and foremost, to make a considerable improvement to the integration and interaction of the various mobility choices. From the very beginning, the provincial and municipal administrations, the local public transport company and designers chose to turn this project into an opportunity to understand the needs of the context and user’s demands, suggesting a design proposal that was specific, able to generate the expected innovation yet also valorise the existing context; therefore, a Mobility Centre able to effectively represent its context, becoming the captivating interface for users. Just to give a few examples – the square overlooked by the new intermodal hub will have a water fountain open to all citizens and available to travellers arriving in the station or leaving it on foot or by bike. We have designed a green area with benches where people can stop to plan their journey or simply rest. Freely inspired by Speakers’ Corner in Hyde Park, London, there will also be an area in front of the Mobility Centre with a specially designed technological system for people who want to make public speeches and start discussions or entertain passers-by with good music. The disabled parking spaces will be connected to an app that enables the user to check in advance that there are free spaces; in addition, ‘pink car parks’ for families and the kiss&ride area are also planned. These are services that increase the quality of the Travel Experience not just for tourists but also the citizen.

3D representation of the access ramp to the bike storage room

F – Good engineering design (or engineering design that generates beauty) is therefore certainly guided by the creativity and ability to interpret the context where a work will be built. What other elements also have to be considered?

M.C. – Taking responsibility for the design choices that every engineer makes in their work, he or she must be convinced that they know the project so well that they can firmly defend it from criticisms that will inevitably be made, knowing all of it in such detail so that they can effectively assess the choices to make during construction without simply being guided by the application of current legislation, using ingenuity to find the response able to valorise, and not just interpret, the context of the project.
The best answer is almost never the easiest. It’s at this point that the skill and passion, that should guide the engineer’s work, comes into play. The passion arises from the awareness of fulfilling a project for a community, the bearer of a message and specific meanings.

A.G. – I would add another element that we can call ‘system engineering’ i.e. the ability to increase and maximise the potential of the project, paying attention not only to the technical details but also the resulting organisational structure and constantly and effectively facilitating discussion between all the stakeholders.
Representatives of the local mobility systems were invited to discussions so that the Brixen Mobility Centre can operate in the best way, thus offering the user a useful, high-performance service. For example, the bus timetables will be aligned to the times of arrival and departure of trains, and the bike rental service will ensure that high-performance bicycles appropriate for the cycle paths starting in Brixen can be rented.
It is, therefore, essential to know how to maintain a systemic view that enables all the players and disciplines involved in a project to be co-ordinated.

F- The engineers are called on to design looking at the long-term – the works constructed today will be used for the coming decades, becoming the legacy for future generations. What innovative design solutions have been chosen for the Brixen Mobility Centre to make this intermodal hub suitable for the users of the future?

M.C. – First of all, I think we have to ask ourselves questions about the way engineering projects interact with users today. Enormous steps forward have been made from this point of view by both designers and national and local bodies. If we think about public transport infrastructure, but also stations or intermodal hubs, it’s important to imagine different interaction solutions developed for different users.
Firstly, we have to think about the inhabitants living in the area where the new infrastructure will be built, the people who will have a construction site round the corner and will see their neighbourhood transformed. We chose to define the construction site in Brixen with panels with ‘windows’ to enable citizens to see constantly what was happening so that local inhabitants would accept and understand the project in all its phases in the best way possible.

We also chose to make the working drawings of the Mobility Centre public in a form that everyone could understand. These are important details that enable a channel of communication to be opened with the population and maintain an open attitude essential for the success of the work and its interaction with the area. At the same time, starting from the assumption that users prefer public transport to private vehicles when they feel welcomed and safe, we developed a people-centred wayfinding project in Brixen – easily perceivable routes with architectural barriers reduced to the essential and signs replaced by ad hoc-designed flooring. This was a forward-thinking answer looking at the users of the future, responding to both the efficiency and beauty standards that make the work attractive for the people using it today.

A.G. – Forward-thinking engineering design calls into question many of the concepts we have explored to date but I think that at least another must be named – the ability of the project to change based on users’ responses to it. I’m convinced that each project should therefore, when possible, maintain a degree of elasticity that enables it to be implemented, developed and changed according to the evolution of the demand. The choice of the Brixen Mobility Centre on covered parking for bicycles goes in this direction. From the very beginning, the choice was made at design level to dedicate part of the available stands to private use (the user pays a season ticket to ensure a handy, secure place for their bicycle), leaving the rest for public use. A wall, carefully chosen from the available alternatives, was built to divide the two areas which, in effect, makes the area completely modulable and therefore easily modified according to the responses of users. 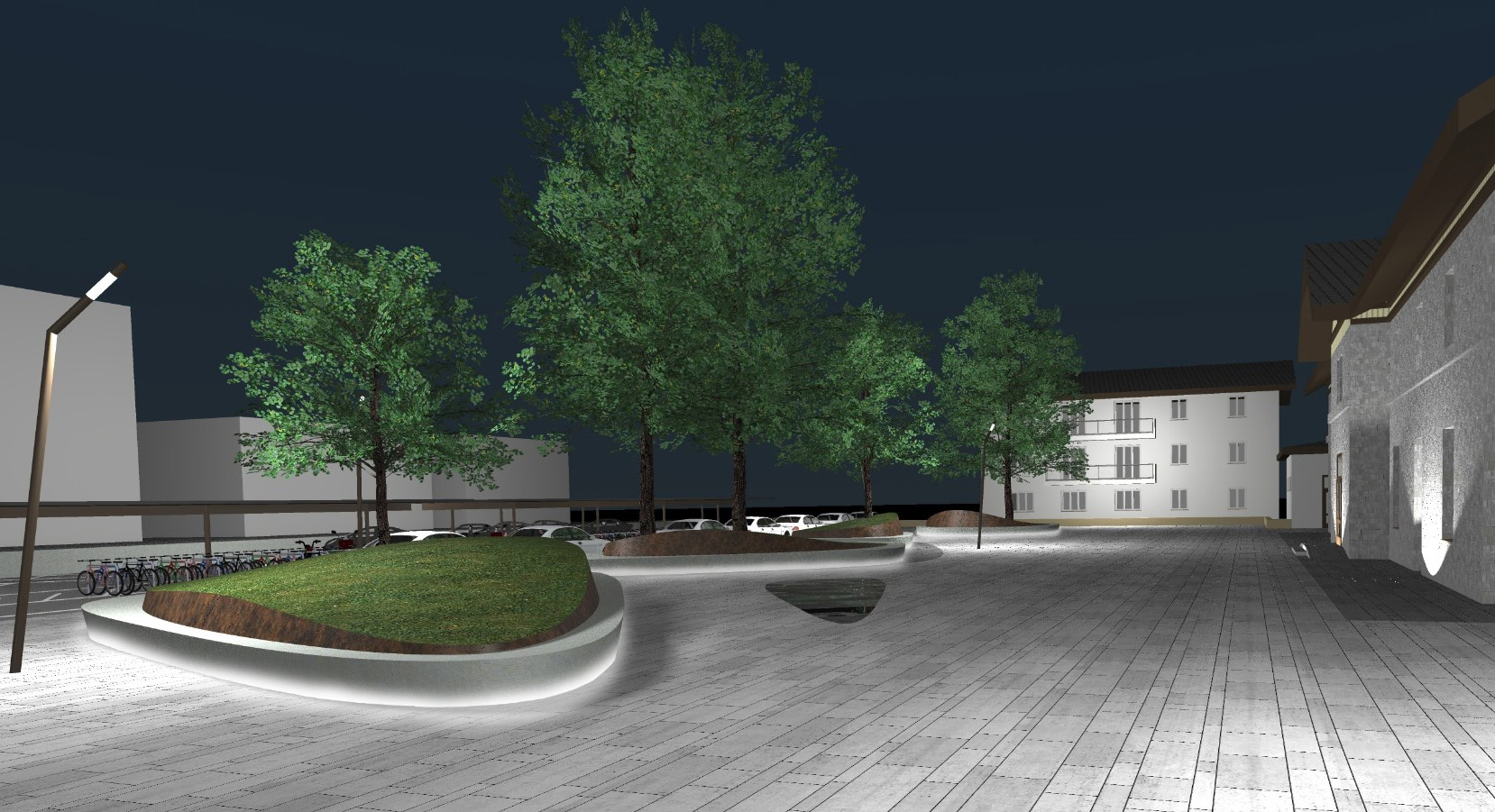 Attention to beauty, valorisation of the context, ability to design paying attention to the users of the present and future are all elements that engineering design should consider to change the destiny of places that are currently degraded and design new ones that can never (potentially) become so.

Mario Cagol was born (1967) and lives in Bolzano. He has been Process Director of Strutture Trasporto Alto Adige for 20 years. His motto is ‘Nulla dies sine linea’ (lit. no day without a single line).

Andrea Giaretta, was born in Milan in 1961 but now lives in Padua. He has worked for NET Engineering for more than 18 years and is Works Director and Safety Co-ordinator in public contracts for the constructions of roads and railways.