The pandemic as a workshop to rethink mobility

What’s the future for LPT?

New paradigms after the Covid-19 pandemic. Focus on the design of railway services and rolling stock. 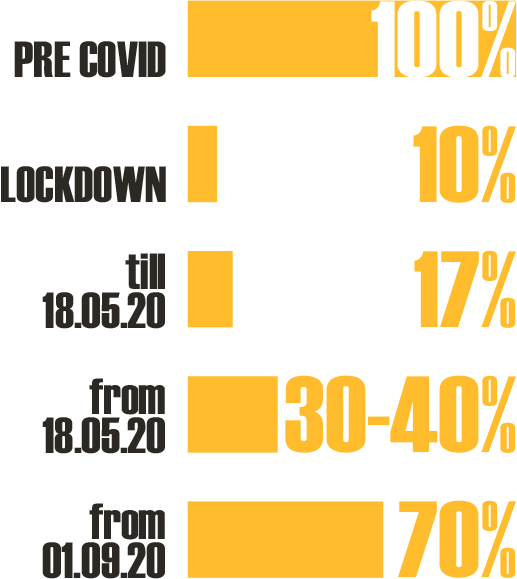 Obviously, these estimates don’t take into consideration the possibility that the trend in the infection curves make further measures containing and closing factories and schools necessary. In addition to the difficult consequences on the demand for transport due to the lockdown, adopted to reduce the risk of contagion, other factors have had a significant role in reducing the demand for transport such as the digitalisation of businesses, the development of e-commerce and remote learning (the now very well-known e-commerce, smart working, e-learning and DAD).

Further critical elements have been the reduction in transport capacity due to the new social distancing regulations and users’ fear of sharing the travel experience with other people. These will have a lasting impact in time, which may become structural, after the current epidemiological crisis.

The fear of collective travel has also been confirmed by the last DOXA survey made for the Transport Regulation Authority. This analysis highlights that 70% of the sample interviewed said that they consider all means of collective transport “much less safe” or “less safe” compared to the pre-Covid situation. This fear of the interviewees concerned both medium/long routes and local regional and urban transport services. 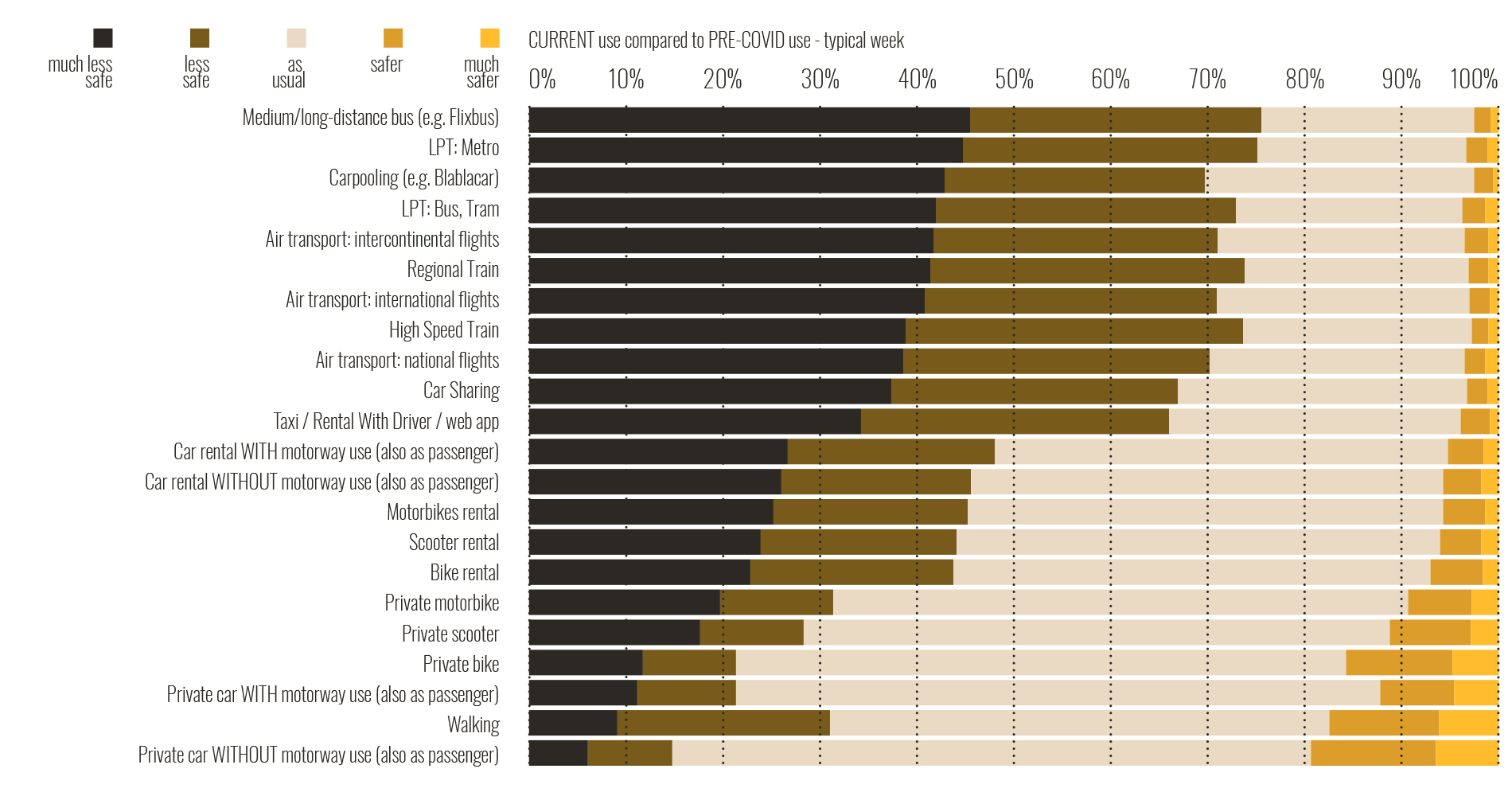 These results are consistent with the modal distribution data of movements which has recently seen a transfer of traffic share from collective to individual methods, returning, justifiably, to levels equal to or higher than pre-Covid ones. The data from a PwC Italia study, shown here, confirmed the above.

The future horizon of collective transport

The trends found in Italy are common to the whole of the western world (Europe and North America) and Far Eastern countries. The main cities of the world are seeing a significant reduction in public transport compared to the pre-Covid period.

The question for transport planners is “Will everything return to how it was when the emergency is over?” The answer seems inclined to consider the Covid-19 pandemic a shock that has produced an irreversible change in our way of thinking about work, education, social relations and inevitably, public transport.

The Black Swan of the pandemic will influence by accelerating best practices that would have required many other years to be adopted, despite the diffusion of digital technologies to implement them, but also marking the human experience of several generations with the fear that the pandemic has generated. In this context of profound changes, the transport world has to deal with short- and medium/long-term choices. A new horizon is outlined in the eyes of the people who have to plan, organise and operate public transport.

“an irreversible change
in our way of thinking about public transport.”

The DOXA survey mentioned above in relation to the current scenario, defined ‘DURING COVID-19’, shows that 58% of interviewees said that real-time reception of information on means of transport available would encourage them to use public transport. The information that these users indicate as necessary is: the level of crowding in transport and at stops, news on the guarantee of respect for distancing between passengers and the real-time estimate of the length of journey.

So, in the short-term, the recovery of the local public transport sector is entrusted to a ‘digital revolution’ to be implemented through the spread of technologies currently easy to find in the low-cost market and fast to install. It’s a question of exploiting tools already available and completing the electronic integration started some time ago in the LPT sector. In this, Sars-Cov-2 will play the part of powerful accelerator of events ongoing for some years. So we’re talking of developing, installing and integrating – e-ticketing, automatic systems counting travellers onboard, intelligent turnstiles in stations, and video surveillance CCTVs to monitor passengers and avoid throngs in the rooms of stations. Local transport must take its ‘travel experience’ closer to that of the air sector or, more likely, long-distance railway transport (High-Speed).

For example, Ferrotramviaria immediately started a project to have a People Movement Analyser.  This in-cloud artificial intelligence system is able to assess the data of the mobile devices used by passengers onboard, picked up with special aerials positioned in the carriage, and check it against the features of the vehicles (capacity of each carriage) thus providing information on the filling of trains. This information will be shown on station screens and the Ferrotramviaria app with a special layout to facilitate reading the information on how full the arriving train is and that on the following three trains. The first aerials were installed on vehicles in September.

This revolution can certainly not be accompanied by the use of the fare lever, in other words, reducing transport fares to make it cheaper is unthinkable given, unfortunately, the worrying economic situation of the sector. Instead, it could be the opportunity to take current fares from a ‘flat’ model (the same price for every hour of the day and every period of the year), in almost all cases, to a model that encourages both the spread of demand over various time bands (discounts in off-peak times) and travel planning (discounts for booked trips and on the contrary, higher tariffs for open-type tickets).

As seen previously, the short-term changes can be dealt with by using digital technologies easy to find and install. The medium-terms ones must, inevitably, have a greater influence on the sector.

Pre-COVID-19, the design aim of railway vehicles for regional transport was to maximise the transport capacity. This requirement was seen in vehicles with narrow seats, significant use of folding seats, and the reduction of the number and width of doors to the minimum permitted by the Technical Standards of Interoperability. This design style may not survive the pandemic. The traveller will choose regional and urban public transport if they can have the guarantee of a journey they consider safe. So designers must revise their design criteria, as must, similarly, the agencies and Administrations who call future tenders for the procurement of rolling stock.

Seats with an appropriate distance between the places must be preferred enabling, inter alia, easy-to-find seat numbering so that booking can be made, exactly as in long-distance journeys. Special covering fabrics with certificated anti-bacterial features can be installed to improve the quality of the seats. Further, the number of doors per carriage for getting on and off must be increased thus enabling a possible diversification of the boarding/alighting flows. Another aspect of redesigning will be the air conditioning circuit, preferring mechanisms with the input of external air and the design of special systems to filter the bacterial load.

These design features are among those that Ferrotramviaria designers are working on in the next invitations to tender for new rolling stock. With regards to the deep sanitisation of areas of the trains and the relative surfaces and areas of common use, however, atomiser systems that act as chemical and anti-bacterial disinfectants for the evaluation of the virucidal action on SARS-CoV-2 respecting the recent European legislation are in full evolution.

The Covid-19 pandemic has already changed the lives of millions of people, their way of working and studying and, inevitably, their way of travelling. Local public transport is part of this ongoing change. We’ll probably see a reduction in the peaks of demand and greater spread of movements at different times of the day. In particular, the type of travel experience required by townspeople will change, nearing that for journeys over a medium distance. Transport companies and rolling stock constructors will have to be ready to deal with the new paradigm, preventing mobility from moving too much to individual transport with an unpredictable and damaging impact on the environment. The challenge has been launched.

Vito Mastrodonato is Director of the Transport department at Ferrotramviaria SpA. He is an expert in railway freight and passenger operations and the operation of lpt road vehicle lines. He has gained experience in all fields of the railway and bus transport sector in particular: transport planning and design, service operation, personnel management and vehicle maintenance.
Roberto Luigi Timo is a Transport Engineer, with more than 20 years’ experience in urban and regional mobility, system design and the technologies for rail transport and rolling stock. He currently holds the position of Business Development Manager and head of the ‘Rolling Stock’ department at NET Engineering SpA.