Sailing through the history of maps

Reading, browsing and drawing maps has always had a special charm (now obscured by the global mapping of our digital life). Why? What else is there in addition to the seduction of the symbols and keys, the purely graphic sign of representation (think of the iconic map of the London Underground) or the history crystallised in historic charts recounting the geopolitics of dynasties and states?

Representing the ‘world’ has always been one of mankind’s needs. We draw it on a map as we slowly discover it so that we can say it’s ours, to appropriate it.

It’s fascinating how the story of map-making is inextricably linked to that of sailing (something which increases the attraction for me of both disciplines), because of the need to convey THE message, “Someone’s been there before you, and this is what you’ll find”. And so atlases, travel diaries, annotations, drawings of the lands explored, nautical charts scattered with rhumb lines, compass roses and pilot books spread. However, in addition to the known, drawing maps has always been a way of relating to terræ incognitæ (“Hic sunt dracones”) and imagining the world ‘out there’ – What is there after the ocean? Is the Earth flat? How do the planets move, what do they move round? The oldest maps mixed geography and religion, observation and philosophy, giving a shape and position to places that no-one had yet seen or would ever have seen, like Paradise and Hell. ‘Fantastic’ maps often contaminate the planispheres and show a very strong drive for knowledge, accompanied by an equally strong desire to explore, which would stay unsatisfied for a long time.

Eratosthenes and Ptolemy. The shape and size of the world 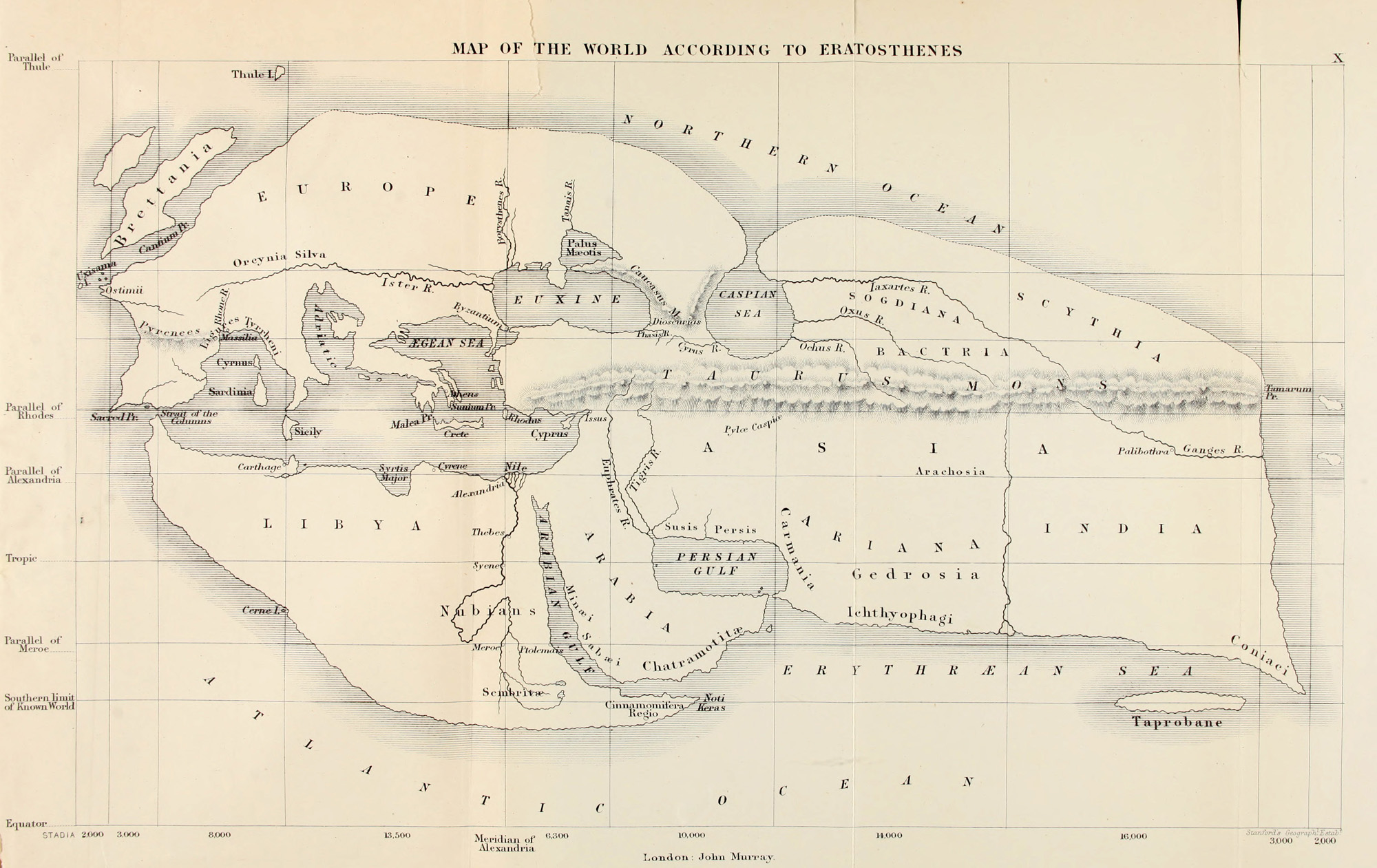 19th century reconstruction of the map of the world known by Eratosthenes, c. 194 BC (source: Wikipedia)

The map of the known western world (of the time) drawn by Eratosthenes three centuries before Christ is disturbing. It not only contains the Mediterranean and Middle East as we know them today, with unexpected proportions, but India and Ceylon, southern Scandinavia, the Black Sea and even the Caspian Sea (which remained mysterious until at least the Mediaeval period), many cities (in the north, the poetic Thule), and mountains and rivers can be recognised. Southern Africa and continental Asia, partly unknown, were however surrounded by sea. We owe two technical wonders to Eratosthenes – the introduction of meridians and parallels (the two most important passed through Rhodes) and the estimation of the Earth’s circumference (it was obvious that it was round), with an error of 2%, in the 4th century BC! 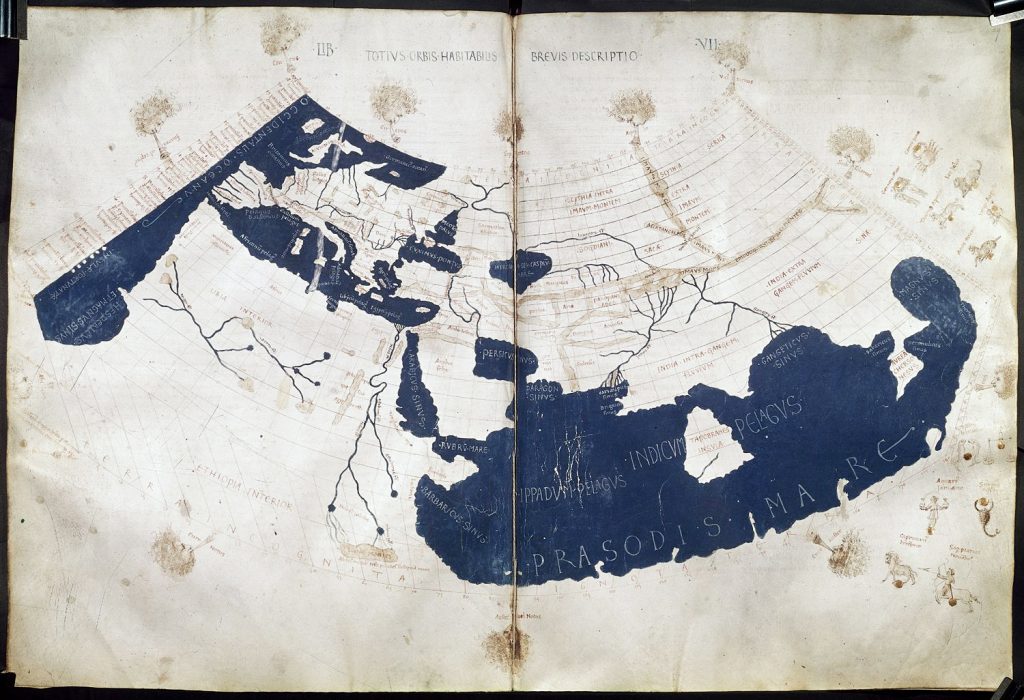 19th century reconstruction of the map of the world known by Eratosthenes, c. 194 BC (source: Wikipedia)

A few centuries later, around 100 AD, Ptolemy produced another, literally very modern, map, starting from reports and texts found in the Library in Alexandria, in pseudoconic projection with meridians and parallels ‘deformed’ on the earth’s curvature, and with a wealth of information and details despite some understandable lack of proportion. Ptolemy’s work, collected in the work Geographia (the first appearance of the term that he coined), was unequalled for another 1,400 years when there were the great voyages of Columbus, Vespucci and Magellan.

Fra Mauro’s planisphere for the predominance of the Serenissima 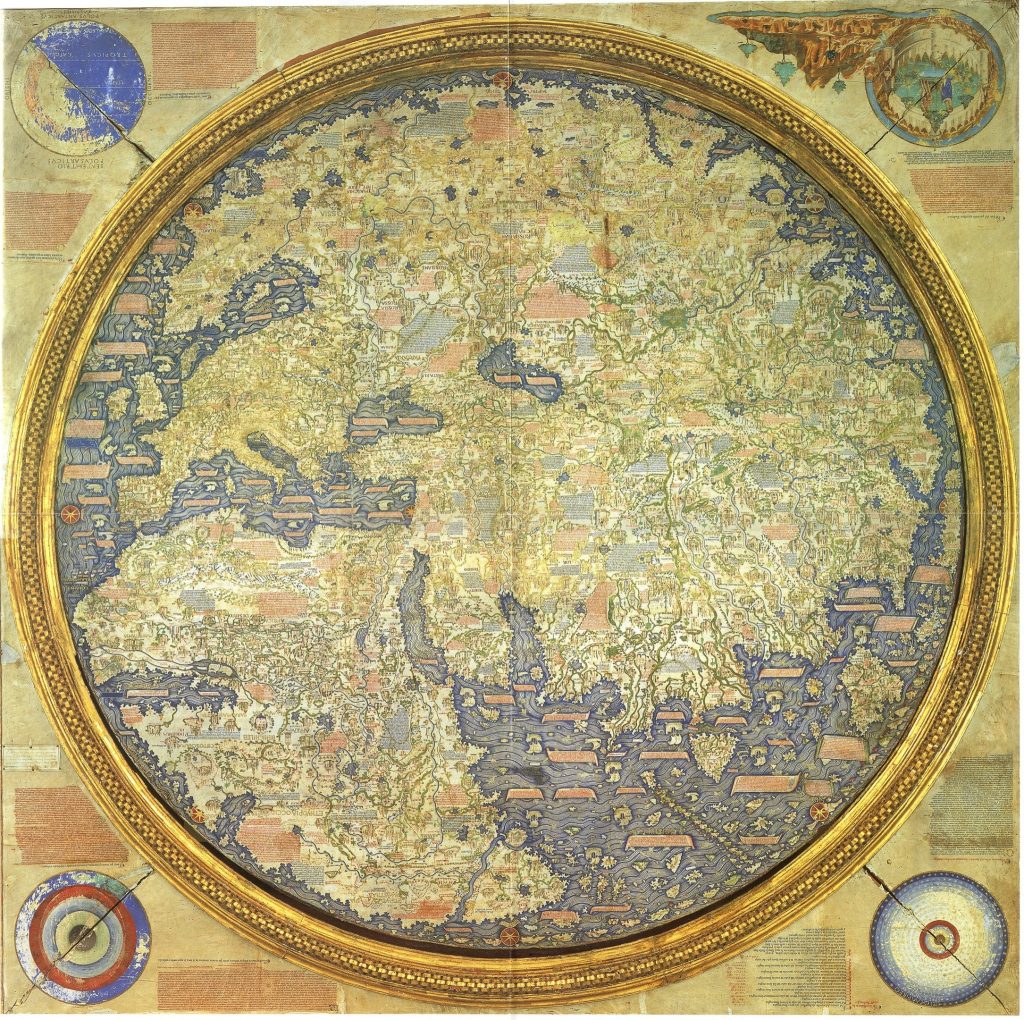 The Most Serene Republic of Venice (the Serenissima) prospered because of the importance given to information on the world outside. More than thirst for knowledge, it was certainly a more utilitarian need subservient to a military and commercial hegemony. A milestone was Fra Mauro’s Planisphere of 1459 AD, a map drawn up as the supremacy of the Serenissima started to waver on the ocean as well (the galea was very effective in the Mediterranean but unsuited for winning on the oceans and beating the sailing ships of those born on the ocean). The Planisphere, kept in the most protected rooms of the city, is full of details and toponyms, skilfully collected by Fra Mauro, also following the travel diaries of merchants, of whom Marco Polo was the spearhead (The Travels of Marco Polo appeared in 1300 and was the only available source on the Far East for another 200 years). 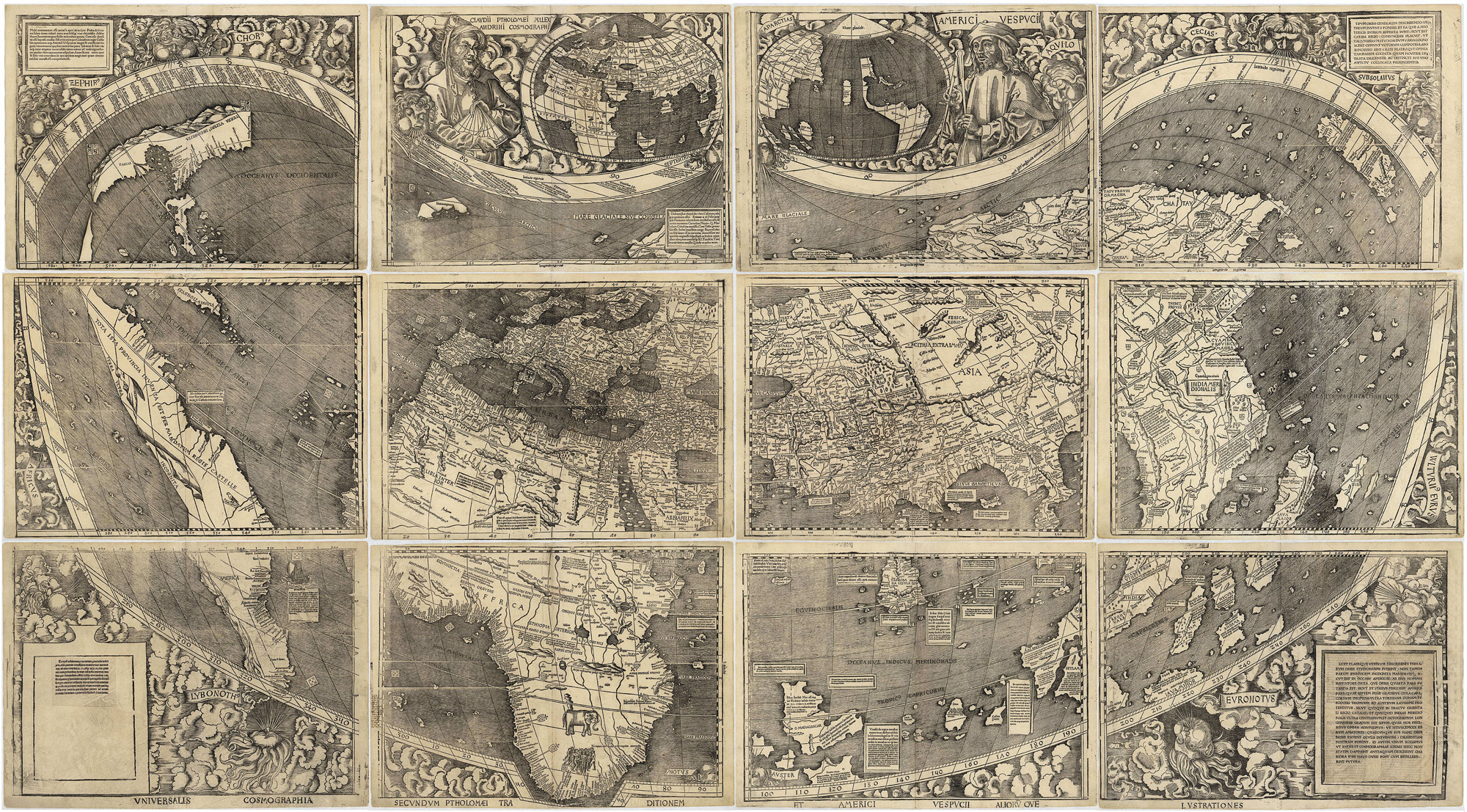 Venice was eclipsed and the period of the ocean crossings that led to a definitive change in the fate (and shape) of the western world. In just a few decades, a new land on the other side of the Atlantic was found, and even then a good map was almost as valuable as the gold that caravels, brigs and galleons brought home.

Only 15 years after Columbus’s enterprise, the New World found its name due to a map – the  Waldseemüller Planisphere of 1507. Amerigo Vespucci, whose whole life oscillated between swindles and strokes of luck, was certainly able to give his ‘memories’ an undeserved fame (also due to the new printing techniques), which the German mapmaker perhaps drew on a little too naïvely. His map of the world, the first printed on a large scale to circulate in Europe, incredibly honoured Vespucci (put on a par with Ptolemy!) and not Columbus. Waldseemüller regretted this and, in the second edition, he replaced ‘America’ with ‘Unknown Land’ but the damage had been done.

The Vinland map, when geography failed to bend ‘official’ history 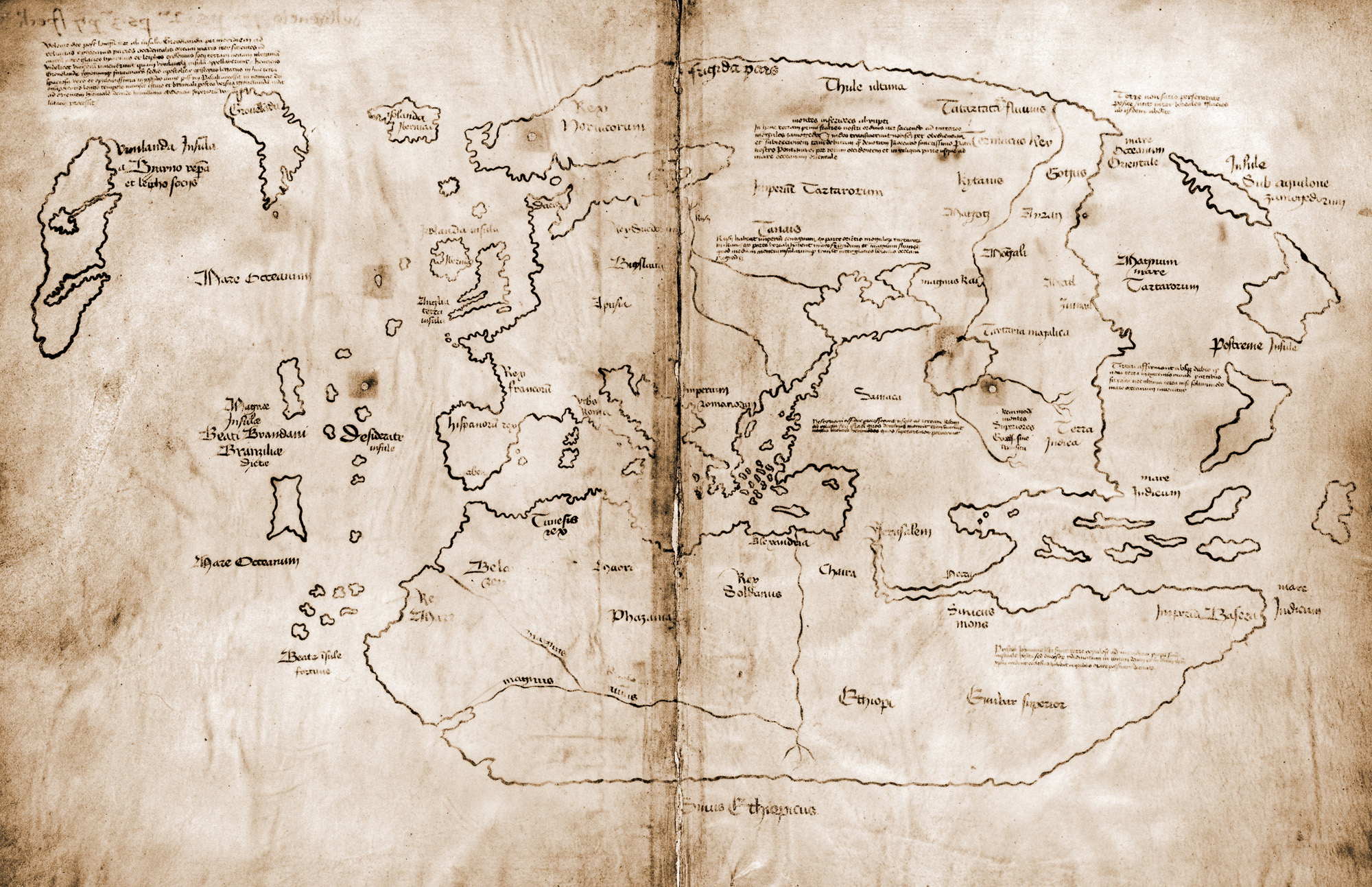 • The Vinland map – 15th century reconstruction on the original from 1000 AD (source: Wikipedia)

In 1957, a map enthusiast acquired the disputed Vinland Map, drawn by the Vikings around 1000 AD and whose authenticity has been debated for 40 years. The Mediterranean, the British Isles and, to their west, Iceland and Greenland (named ‘green land’ by another Viking joke) are clearly recognisable. However, and this is the thing that is revolutionary, there’s another land drawn on the map to the west of Greenland – Vinland (land of wine) can’t be other than the coast of what we call North America. This half-unknown map tells us that America/Vinland was discovered between 985 and 1001 by the Vikings (their tombs were then found in Newfoundland). This shouldn’t be surprising  as, skilful navigators, they had already gone to (and returned from) very distant lands. But world politics preferred not to rewrite ‘Columbian-American’ History…

Now. Cartography for all!

Today, this epic and fascinating story has been replaced by geolocalisation in real time, Google Maps in every smartphone, self-generating maps (at Google) starting with our data. Nevertheless, if mapmaking has been mainly a question of preserving power for hundreds of years and, as such, it was something to keep safe and protect like the most precious military secrets, the tools (and information) for mapping have been, literally, available to all for really just a few years. After the almost total disappearance of printed geographical atlases (1800-2000), we now have the GIS (I personally use QGis, which is open source), Google Earth, OpenStreetMap (a free map much more reliable than Google Maps – try it), satellite photos and Open Data, an immense, collective heritage to draw on to explore and represent our world or study places we don’t have direct experience of.

“an immense collective heritage to draw on
to explore and represent our world.”

On one hand, there’s still a juxtaposition between Free Knowledge (the universality of Open Data as a common good) and Power (such as the information to be seen on Maps decided by Google and not the user!). We professionals now have a wonderful philosopher’s stone at hand for the generation of maps, geographical analyses, knowledge and information for our work and the community. These tools (in an operational reality unthinkable 40 years ago) help us to, for example, plan and design infrastructure with lower environmental impact, know and prevent the environmental or climatic risks, plan and provide energy or mobility services calibrated on the specific nature of the demand, analyse the climatic changes and their impact on living beings, intervene after natural catastrophes, analyse electoral dynamics and plan new crossings. It’s hard to find a sector where GIS isn’t used in such a prolific era for map and mapmaking enthusiasts (just have a look at the Flickr QGis group to realise this). 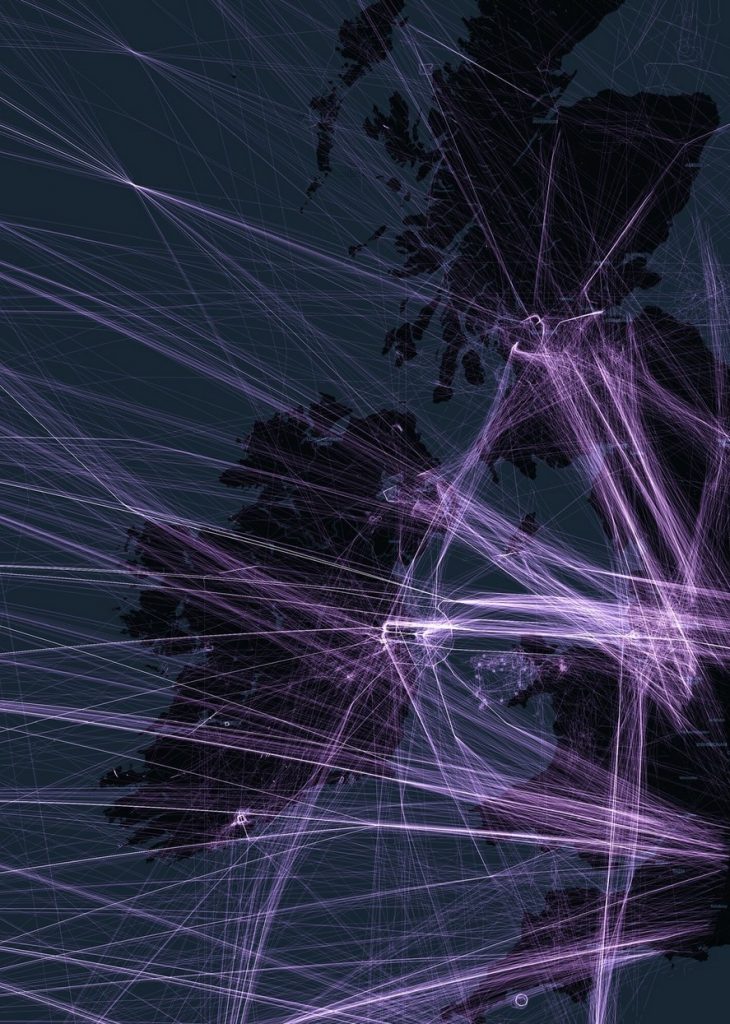 As a professional, two aspects that enchant me are the freedom and ease with which we can now work on data (geographic and non-geographic). On one hand, Open Data makes an immense basic information heritage available (with a couple of clicks) both centrally (e.g. the EU, ISTAT (Italian Statistics Office) and ISPRA (Italian environmental research and protection agency)) and locally (although very uneven in Italy where Open by default set out by Law is struggling to become normal practice in the PA), helping us to know and analyse phenomena from both new points of view and with greater quality.

On the other hand, a new availability of GIS software (again through Open Source) allows technicians, even those with little specialisation, to carry out analysis and spatial transformations of their data and projects. Twenty years ago, there was the Autocad icon on the desktop of every engineer; today, it’s likely that there is also that of QGis, software that can easily be used for hundreds of applications and by different types of users because of its ease of use, completeness and flexibility. Over the years as a consultant for engineering companies and the PA, I’ve personally seen ‘the papers’ pass from the hands of the ‘geek’, who only worked with GIS and was always overloaded by the thousands of requests from designer colleagues, to the hands of the designers themselves, who can now manage their work independently.

And, after all, the real task of us technicians is to be able to listen, ask questions and interpret the context (social, economic, environmental, etc.) where we work to find the best answers possible for the decision-makers (more or less) illuminated who contact us. A GIS is nothing more than a tool used daily, like an Office program. Nevertheless, the new maps we produce, just like the historical ones mentioned above, are useful and necessary for widening the horizons of Decision-makers and Communities because, while they reveal new borders and little-known lands, they also help them to reach them.

Ours is a new and incredible arsenal to continue giving shape to our world, talking about it, knowing it and making it more and more ours while we draw it on a map, for others.

Jacopo Ognibene is an architect specialised in traffic and sustainable mobility planning; he has been freelance since 2001 after training at the IUAV, Venice. He is active in Public Transport, Infrastructure Assessment, Urban Mobility, and Cycle and Pedestrian Mobility, which he mainly develops through the use of advanced decision-support tools (models and GIS). He is a regular consultant of NET Engineering as Project Manager.

Bibliographic routes for sailing through History and Maps