How Italian workers can move from school to university

Rethinking the organisation of work to facilitate change

What is Agile Working?

Agile Working, also known as Smart Working, moved into the spotlight of Italian news during the first phase of the COVID-19 emergency with the Decree Laws that made it essentially obligatory for many sectors of production. It was like being thrown into the deep end without a lifeline for many workers.

Agile Working and ‘working from home’ are not synonyms. In Italy, Law 81 of 22 May 2017 “Misure volte a favorire l’articolazione flessibile nei tempi e nei luoghi del lavoro subordinato”  (Measures to promote a flexible structure in the times and places of salaried employment) defines Agile Working as “a way of fulfilling the salaried employment relationship established through agreement between the parties, also with forms of organisation by steps, cycles and objectives and without precise restrictions of times and place of work, with the possible use of technological tools to perform the work”.

So we’re talking about a method that involves employees who, in return for clear objectives and definite and well-defined cycles can organise themselves autonomously to achieve the established aim.

“It was like being thrown into the deep end without a lifeline.”

The first European legislation can be found in the ‘Flexible Working Regulation’ of the United Kingdom of 2014, Northern Ireland in 2015 and General Principle 48 of the European Parliament resolution dated 13/9/2016.

However, the genesis of the concept of Agile Working dates to several years before, to 2001, with the publication of the ‘Manifesto for Agile Software Development’ by 17 leading members of informatics, promoters of lightweight methods of work compared to traditional Project Management. The importance of valorising the following is set out in this manifesto:

«Individuals and interactions over processes and tools
Working software over comprehensive documentation
Customer collaboration over contract negotiation
Responding to change over following a plan.»

Note that remote working is not mentioned but arose as an opportunity result from subsequent technological progress, specially in the on-line Libre Software and Open Source community. It can be inferred that working remotely means agile working whereas agile working does not necessarily imply remote working. Three of the 17 original signatories of the Agile Manifesto are pioneers of Scrum, the most-used agile method in the world today. 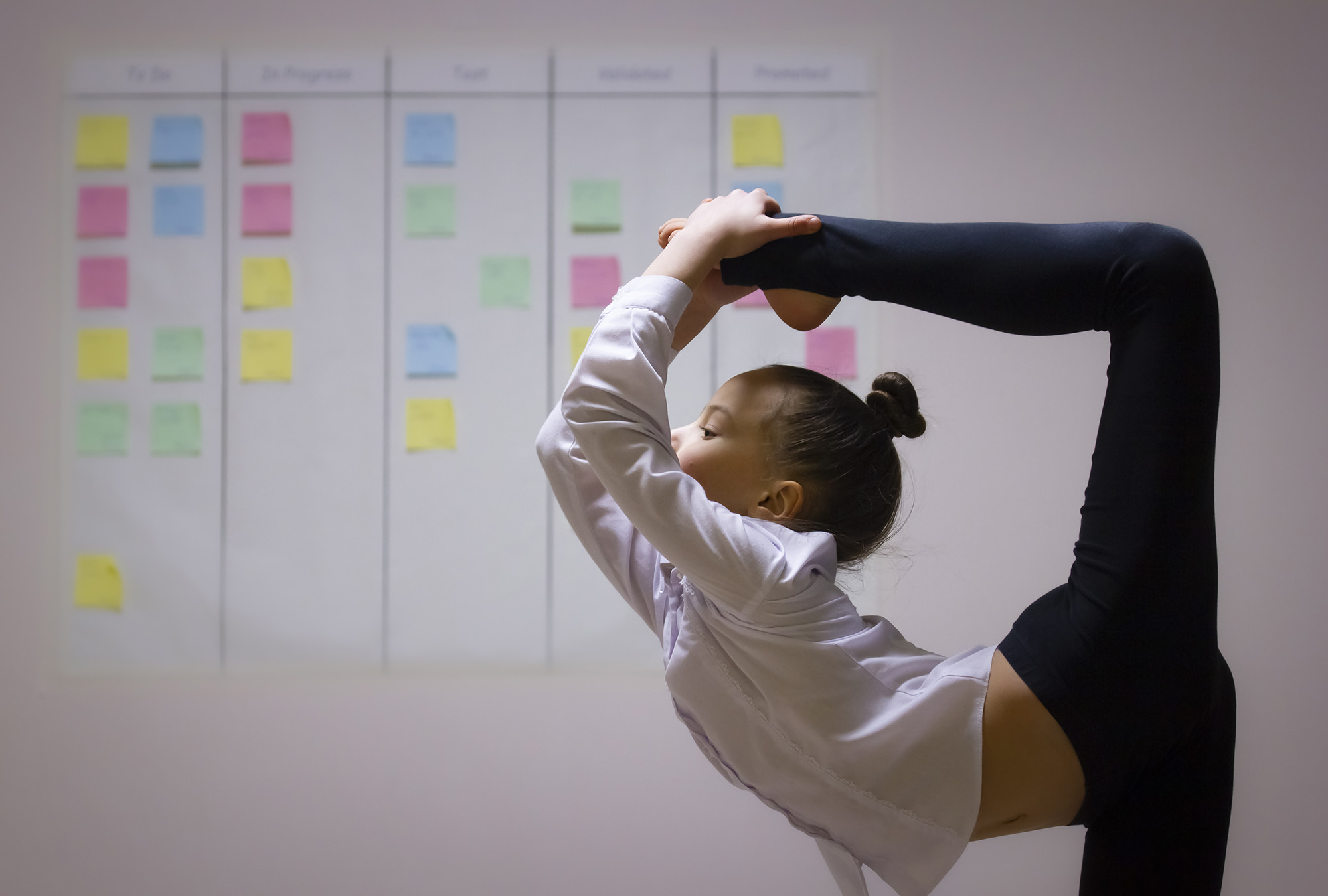 Scrum is an iterative and incremental Agile Framework, devised to develop complex projects, presented by Ken Schwaber and Jeff Sutherland in 1995.

It organises work in self-organised, cross-functional teams, i.e. with all the skills necessary to achieve the aim. A member of the Scrum team, called Product Owner, is concerned with understanding what has to be done, deciding the priorities and maximising the value of the result, and visualising them in a visible, clear and ordered list (called Product Backlog). The other team members, called Developers, have to decide how to create the product organising themselves. Lastly, one member, called Scrum Master, is delegated to overseeing the process – improving productivity and removing obstacles, i.e. all that slows or impedes achieving the aim. Work is planned in work cycles called Sprints that last for a maximum of one month (often two weeks). At the end of this, there is a revision with the stakeholders, i.e. those with an interest in what has been produced (customers, users, colleagues, managers, etc.) to collect feedback. Immediately afterwards, the team reflects on what to improve in an event called a Retrospective, agrees practical action to implement and so starts again with a new Sprint. In this way, the Scrum team is self-organised deciding autonomously how to implement the work, solve problems and continuously improve. 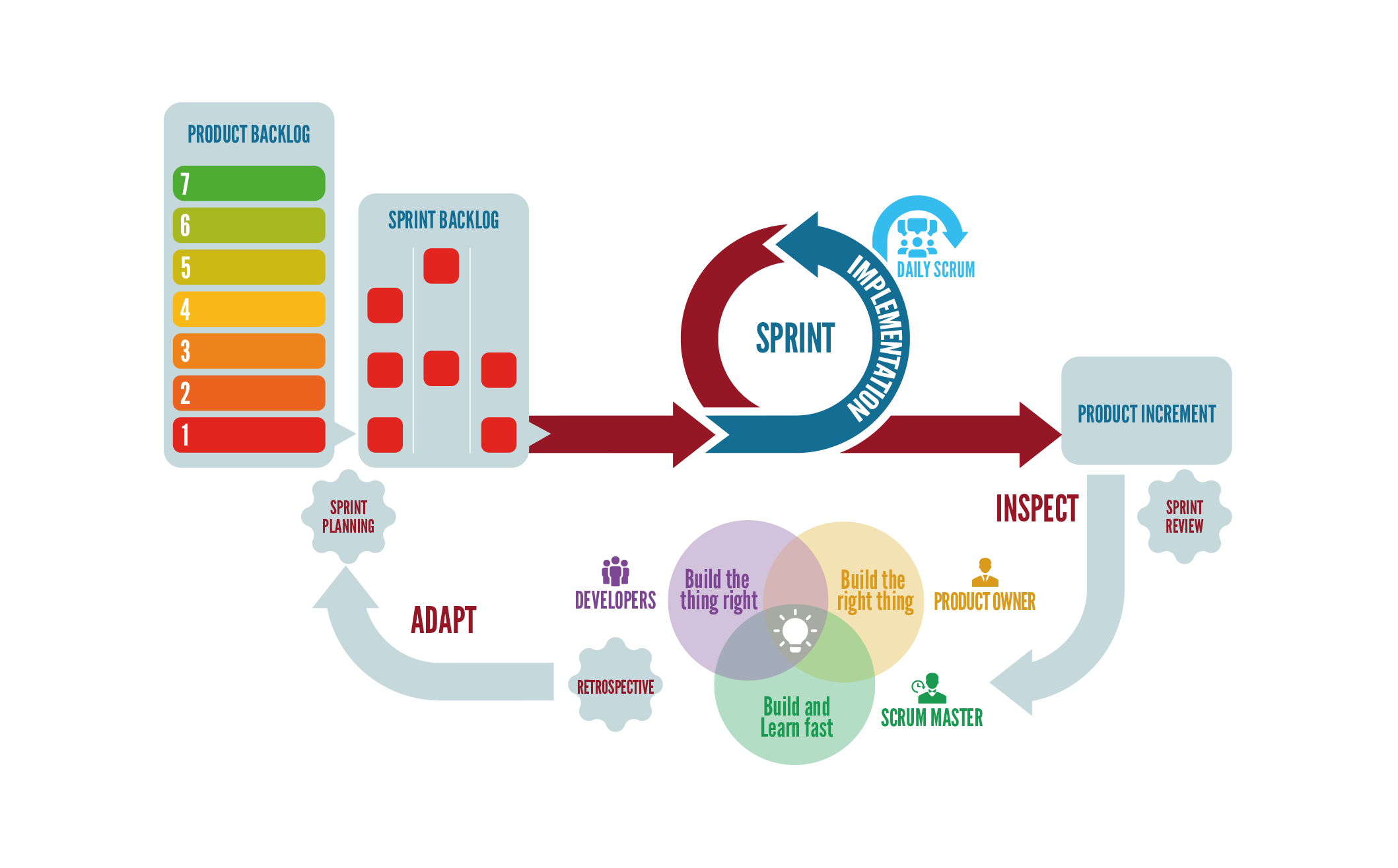 Agile and Scrum in engineering

Today, 25 years after its publication, Scrum implementations are found in industries of all types – from manufacturing to catering, and even in education. In engineering, we find NET Engineering S.p.A., which started to be interested in the Scrum method at the end of 2019, launching a first pilot team in the Monselice (Padua) offices at the beginning of 2020.

Professionals from different disciplines (accountants, structural engineers, draughtsmen, transport experts, architects, building services engineers, etc.) take part in the team, able to create works autonomously in the railway or road ambits “as if they were a small, independent design studio”.

They have their own space and a wall where they can set out the two-week work plan (Sprint Backlog) and that of the whole work (Product Backlog). They have a team motto “stop starting, start finishing!” borrowed from another Agile method called Kanban.

This has been the approach used to transform the usual method of work – from a situation in which the Project Manager acts as a waiter, taking each person their meal, to a buffet lunch, where the Product Owner sets the table, arranging the food with great care so that anyone can help themselves. 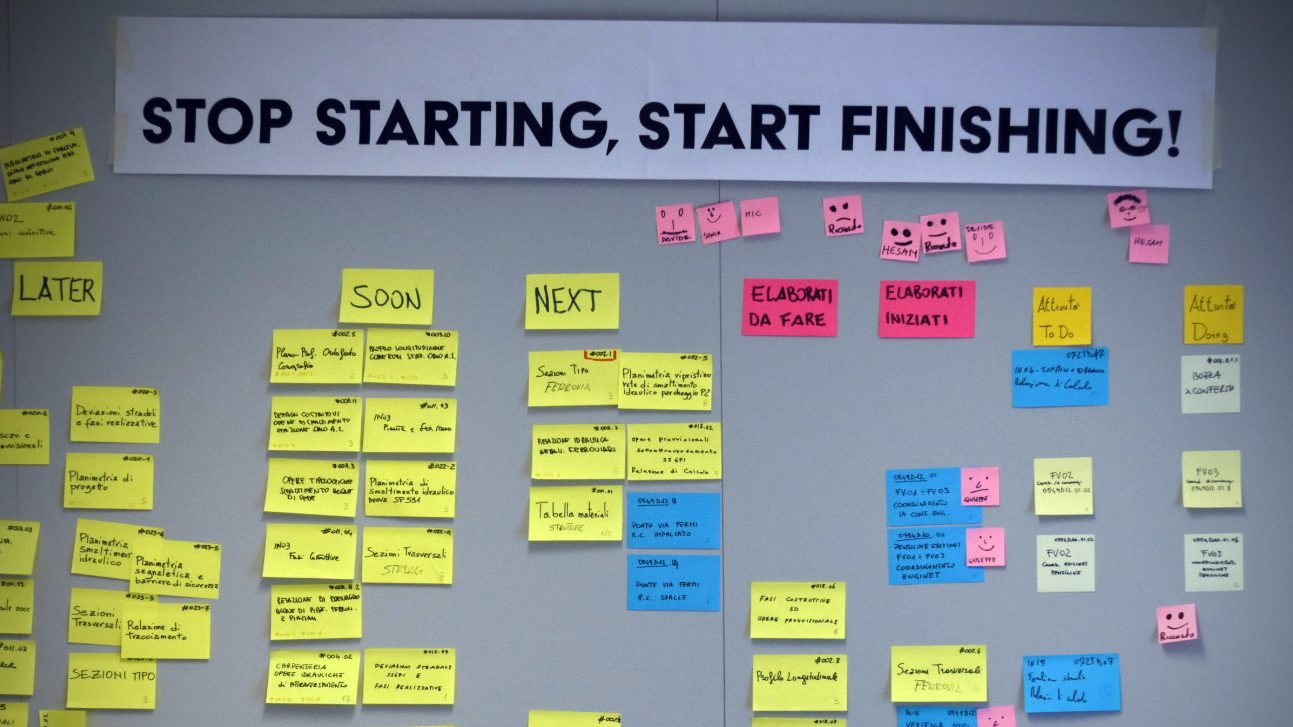 Advantages of Scrum organisation during the COVID-19 emergency

The transposition of this way of working to remote only requires the availability of one of the many IT tools for sharing data to replace the wall and post-its.

Working in a team means keeping the cost of co-ordination low due to the reduction of the number of people to interface with to complete the work. The radical transparency given by the Product Backlog, with the long-term plan, and the Sprint Backlog, with the plan for the current Sprint, enables each member of the team to understand how to contribute to achieve the pre-set aim by themselves. The cyclical nature and predictability of events, such as the daily 15-minute scheduled meetings called Daily Scrum and Sprint Reviews, reduce the number of conference calls and eliminates the meetings on work progress.

For the management, being able to manage a system of small teams (from 3 to a maximum of 9 people) rather than individuals reduces the organisational complexity by an order of magnitude. In addition, having two key roles, the Product Owner to co-ordinate the priorities of the company with those of the team, and the Scrum Master for all the organisational aspects, makes problem-solving simple and immediate. In detail, Little organisational problems, in particular, are solved autonomously by the team, freeing the managers from this task and reducing the inclination to micro-management.

Agile companies organised in teams have seen the simplification of compliance for restarting. Programming the sprints in a grid pattern, i.e. alternating attendance of the teams on different days, enables the use of common spaces to be more easily managed.

Another advantage, and not something to be ignored, is that by keeping the teams isolated, in the unfortunate event of a new infection, only that team would have to be quarantined, thus reducing the exposure to risk of the whole company.

Elements for the government of the Agile organisation, such as the ‘Half Scrum’, enable the Product Owners to co-ordinate, simplifying the distribution of work between the teams and giving the Managers a simple, orderly overview of the company.

Transforming your company into a Distributed Agile Organisation has different advantages.

For employees, it wouldn’t be working from home but working anywhere. This would give, for example, a young person the opportunity to move abroad temporarily to learn a foreign language and culture, a parent the chance to take the family to the seaside or the mountains while continuing to work, or help to be given to a family member in need who lives a long way away. In particular, however, it enables talents to be attracted, wherever they are, and, why not, contribute to giving a new prospect to Italy, with so many areas with a high rate of unemployment.

Hoping that, after this emergency, everything won’t simply be alright but will go even better.

Paolo Sammicheli is a businessman from Siena with more than 25 years’ experience who works as an Agile Business Coach specialised in Scrum, Kanban, Design Thinking and Lean Startup. He works with Scrum Inc., founded by Jeff Sutherland, co-author of Scrum as a Licensed Scrum Trainer. He is the author of the book ‘Scrum for Hardware’, distributed by Amazon and Leanpub, the first significant publication in the world on the subject.