“When I speak of complexity, I am referring to the primary meaning of the Latin word “complexus” – that which is woven together -. The elements are different, but you have to see the overall figure, as in a tapestry. The real issue (of thought reform) is that we have learnt too well to separate; rather, we must learn to connect.”

The pandemic which has recently struck us has highlighted features and critical points of our world – a world unaware of the extent to which it is connected and the speed that events are produced, unprepared to work together, complex in the interrelation of linking events, immature in the use of data and slow to offer a strategic vision.
These critical points can similarly be found locally.
The cities and regions have become complex organisms that should be able to evolve more rapidly with respect to faster and faster changes, adapt and respond to temporary needs without, however, losing their identity. Can planning go with this level of complexity and speed in this situation? How can we plan for the future knowing that we do not currently have all the data to understand it? We think it can be done but it needs a change of paradigm.

Complex thought needs to be introduced into planning to allow a general view of an area and, at the same time, get to know and talk to all its specific contexts, to embrace the uncertainty of the future within a precise, definite design and also to see and understand the tapestry, threads and the connections between them. The following are necessary to do this:

Design and architecture, which contain the ability to pass from the unit to the global in a way very similar to complex thought, become essential disciplines for this process as they are able to visualise and organise the information and relations and then translate them into a systemic view.

This is the type of approach we adopted when dealing with the LAB EOLE project.

The Eole project sets out the extension of the RER E line, the regional train that crosses Paris horizontally and connects it with the surrounding area to the west to improve the daily movement requirements of travellers in the Ile de France.
The extension of the line will enable the professional centres of Paris to be directly connected to the La Défense business district and all the municipalities of the surrounding area, facilitating their employment and economic development. It will also make access to the area north of Paris, the Gare de l’Est and Charles de Gaulle airport easier and, with the Grand Paris Express, it will contribute to redesigning the appearance of the metropolitan region. The commissioning of the Eole project is forecast for 2022-2024.

In 2018, the Société Nationale des Chemins de fer Français (SNCF) decided to start reflection on how to innovate the services in stations, intermodality and the traveller’s experience, aware that it was a leading player in this vector of change and the key role it would have for the citizens of the future. IT’S was asked to start and co-ordinate this reflection, indicating possible solutions. 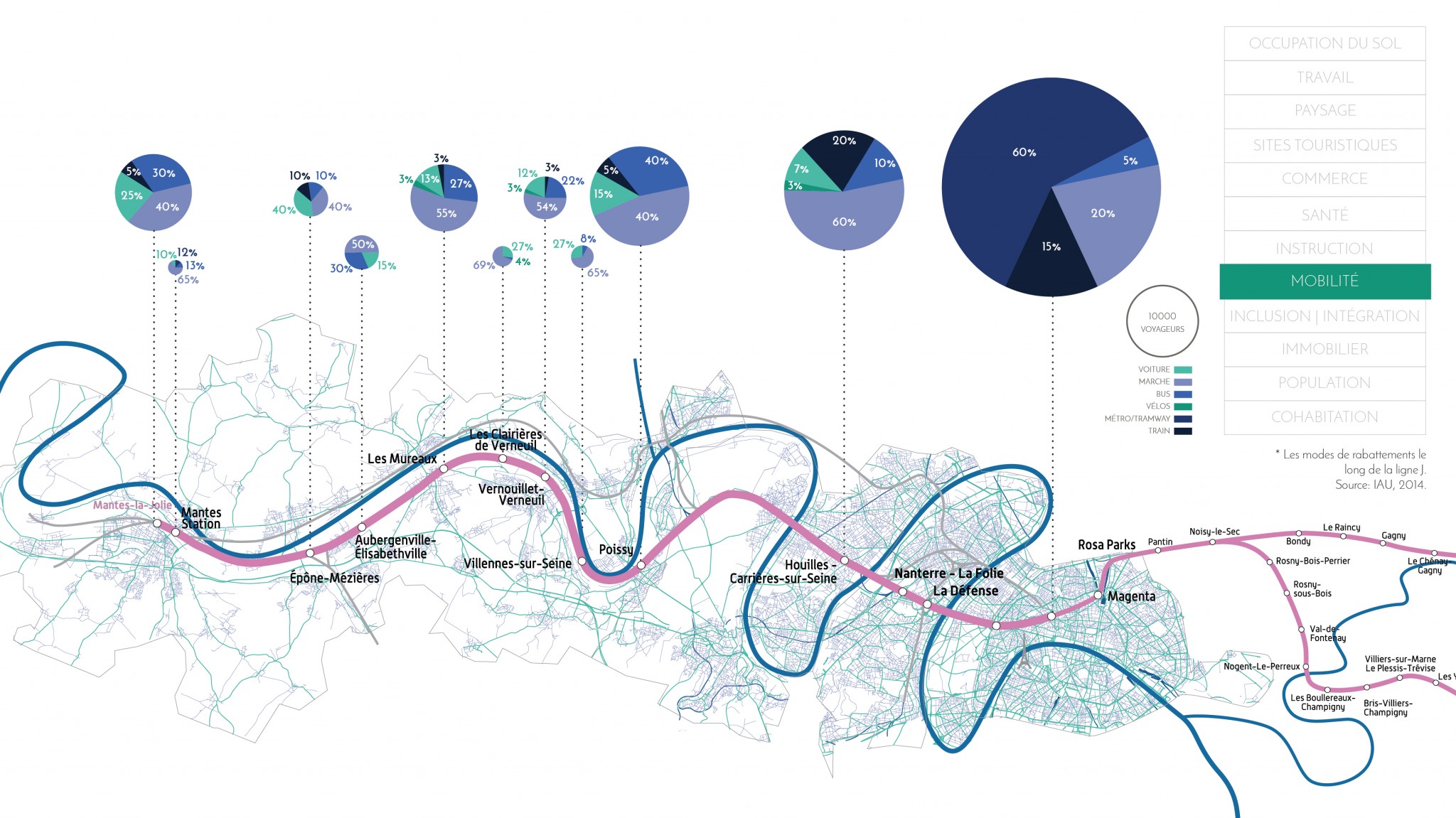 Today, the role of a railway line and its stations is no longer just that of a connection between different places but a main interface with the area. For example, the large stations in urban nuclei are no longer simple providers of mobility services limited to the perimeter of the infrastructure. They have become true service hubs whose range of influence can be felt for kilometres in the urban fabric. It is obvious that the bodies involved in the innovation process of the stations are no longer just the railways and travellers but all the players who interact with the interface.

How can such different bodies be involved in such a vast process? What is the role of the small and medium-sized RER E stations dotted throughout such a mixed region of industrial and agricultural areas, and small, medium and large towns? How can a question as vast as that posed by the SNCF, which touches design, architecture, planning, services, economics and politics, be answered? How can pertinent replies be given to such a mixture of problems?

Innovation is an exponentially growing process and the rate of adoption of new discoveries doubles every decade. How can innovations be suggested that don’t risk becoming obsolete in their creation process or that can change depending on totally unexpected conditions such as a pandemic or economic crisis?
These and a series of other questions faced us with a completely new challenge – designing the management of complexity. Designing processes is not new in the design field, which has been dealing with these topics for some time, but it is for architecture. As a result, we decided to draw on methods and knowledge from design, and the management, economic and digital sectors.

Firstly, we set up a transdisciplinary team – Trivioquadrivio and Elements, two companies expert in agile innovation processes, collective ingenuity and coaching, and Parallel Digital, the IT’S centre specialised in digital innovation. As we were aware of the extent of the question and the miscellaneous nature of the topics to deal with and we were conscious that the conditions necessary for innovation have to be built before producing it, we decided not to answer SNCF’s question directly but to construct a method able to generate answers – the Lab Eole.

This was devised as a permanent innovation laboratory consisting of a team, a method and a tool.

The team was conceived as a system of concentric nuclei:

Collective intelligence and co-creation are at the centre of the process.
Involvement and disciplinary hybridisation are necessary to innovate and answer very complex, mixed questions.
The permeability of the laboratory to variable geometry means that all players can feel directly involved in the project work and responsible for the end result.

A process for the innovation of services of the RER E line required a methodology that was both agile and flexible, able to talk to the different bodies involved, and able to adapt to the dynamism of the economic, social, technological and political situations. That is why we abandoned a linear view of the process in favour of a non-linear, dynamic view, able to adapt and learn over time, more akin to the operation of a neural network.
At the base, there’s an iterative process with Test&Learn incremental logic aimed at testing an idea, a Minimum Viable Product or a small-scale prototype, predicting their impact before reproducing them on a large scale. This process was applied to the construction of the method so that it could be adapted and improved as the process moved forward.

The most difficult question in a process of this type is how to organise the great mass of information and data to make it intelligible and easily analysed and communicated. How can complex information be transferred to very different contacts – from the infrastructure engineer to the politician or citizen? How can a clear, synthetic view of the innovation process be obtained that is also very analytical and detailed? And how can the essence of a dynamic process such as this, which varies in time and moves in space when all the information communication tools are often static (dossiers, designs, tables and PowerPoints) be conveyed?

The classic tools available to us, even for a simple communication, suddenly seemed archaic; they didn’t reflect the depth and richness of the situation concerned. How could everything be made measurable and quantifiable so that a tool for comparison could be offered?

Visual intelligence and data design, i.e. the ability to transform abstract data into images that anyone can immediately understand, came to our rescue. So we imagined a tool that had all these features. We thought of it as the computer on board one of the latest vehicles, able to give the driver complex information simply and synthetically, with the option of moving from the general to the specific, from macro to micro – Complexity Information Modelling, a sort of BIM of complexity. Thus, the idea arose of creating a Lab Eole digital navigator, able to put together cartography, projects, graphs and big data, a tool for analysis, co-creation and communication.

A tool able to adapt to the complexity of the area and still unknown variables, able to dynamically separate and unite the threads of a continuously evolving tapestry. 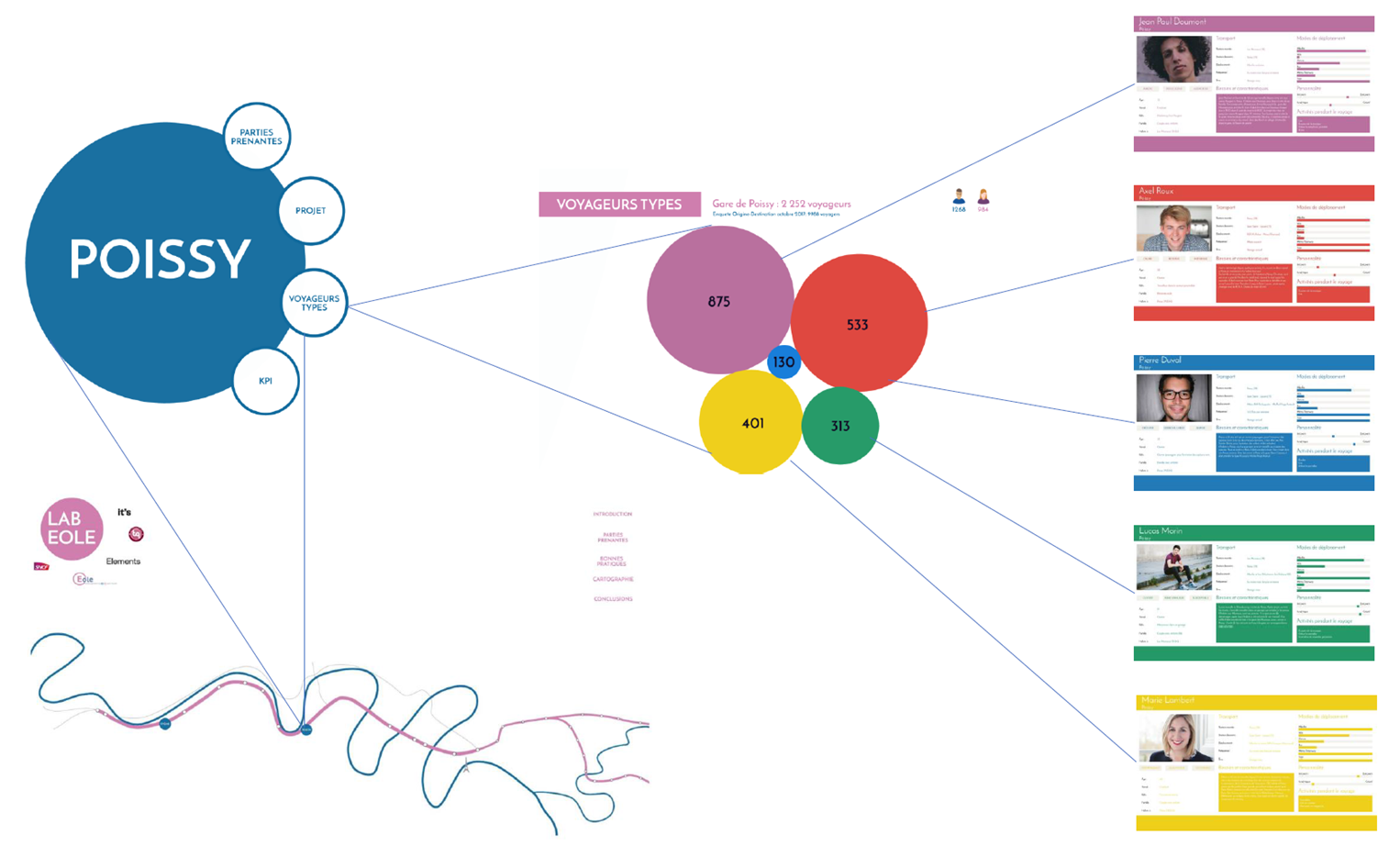 Francesco Marinelli is a partner and founder, with Alessandro Cambi and Paolo Mezzalama, of the architecture and research firm IT’S and Parallel Digital. The aim of IT’S is to extend the confines of architecture by hybridising its methods with the expertise of other sectors such as advanced mobility, digital and design to evolve its skills and offer innovative services. Parallel Digital is specialised in BIM and the use of digital in construction processes. Francesco Marinelli is a member of the Promotion Committee of the Maison de l’Architecture IDF, Paris. He was a visiting professor in the Faculty of Architecture at Roma Tre University.