Transforming plastic waste into the foundation of a new landscape

“Envisioning the Anthropocene” (2015) is a speculative architecture project designed by Kornelia Dimitrova during her Master’s graduation studio at Eindhoven University of Technology. In 2016, the project was nominated for Archiprix Nederland – an award given annually for best graduation projects in the Netherlands –  and in 2017  for Archiprix International.

The flows of plastics

The project concept and design was created after conducting a thorough research and analysis of the flows that define and shape the island of Texel, one of the five barrier islands along the North Sea coast of the Netherlands. This study was published in 2017 in ‘Texel Flows: a metabolic atlas.’ As with most islands, the flows of products, materials and waste are interconnected and strongly visible. Typically for islands, there are facilities in place to transform organic and green waste into compost that can be used by the farmers on the island. Glass, paper and other recyclable materials are also carefully collected and brought to recycling facilities. Of all waste categories, however, plastic is often more problematic on islands than on the mainland. The reason is that the processes are usually more complex and most islands do not have the facilities to recycle or reuse it. It is also one of the most difficult types of waste when it gets spilt in nature without control. To say this simply, there are no natural ways to deal with plastic; so far, it remains a distinctly human material. This is why Envisioning the Anthropocene focused on this type of waste.

Typically, plastic arrives on the island by boat, in the form of packaging and products along with all other supplies that the islanders need in their residential and commercial activities. Less often, it is washed onto the shores. And eventually it gets taken away in the form of waste. The idea was to treat this ongoing flow of plastic as a resource and explore what possible applications it can have for the community and nature on the island.

The concept of Anthropocene is a central topic in the project. It refers to the geologic epoch of humanity, which signifies the strata of rock formation where human impact is visible. The term was popularised by Nobel Prize winner Paul Crutzen in 2000. This project speculates about a new kind of presence of waste recycling factories; a presence that is more public and celebrates the role infrastructure plays in our societies. We now need to think of what role infrastructure should play in the world where the climate is changing. Can we re-invent infrastructure and industrial facilities as instruments to heal the landscape, and not just move through it, or harvest its resources? This project elaborates an alternative scenario for the role of plastic waste within Texel’s coastal landscape and develops an infrastructural typology that can embody this process.

Envisioning the Anthropocene ultimately explores the possibility of introducing recycled plastic as the building blocks of new land. In nature, highly durable materials, such as rock and sediment, are not part of the nutrient cycles, instead they serve as a base. Plastic is highly durable and it will be one of the key markers of humanity’s geologic era. The project gives plastic a constructive role in the Anthropocene layer. Essentially, man and technology, as the ‘geologic’ force that created plastic, provide a ‘geologic’ process that reconnects it with Nature. 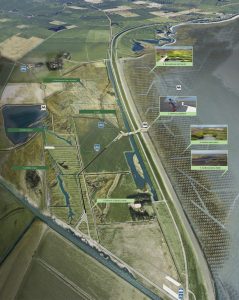 The design unfolds at the scale of the island in the form of a landscape park for recycling plastic waste and facilitating the development of new Salt Marshes, a typical wetland environment of the Wadden Sea area, that develop naturally and were catalysed for land reclamation and coastal defence; their natural development was stopped by the built embankments on Texel. On the architectural scale, the project proposes a type of technical buildings that embodies their value to societies and land. The project is defined on two levels – a mechanism and a machine. The plastic waste of the island is transformed into the building block of new Salt Marshes while the recycling facility both accommodates and symbolises this metabolic process. Texel has the ambition of achieving self-sufficiency and being a testing ground for initiatives that address this goal. Envisioning the Anthropocene responds to this by treating the island as an organism – a complex network of systems.

The mechanism makes use of plastic waste as the raw material for the production of modular structures that would guide and encourage the accumulation of sand and silt along the Wadden Coast of Texel. A third of Texel’s plastic waste flow is suitable for this application so the park is designed to accommodate such capacity, producing 5.7 ha/year. The Salt Marshes would gradually grow as the result of the interaction between the waste and tidal flows. This will possibly continue with the rise in sea level, which will provide continuous input of sand and silt. The architectural endeavour was to accommodate and symbolise the gesture of placing the material in the landscape and so constructing the future landscape – with care, effort and planning comparable to those of the material’s extraction. 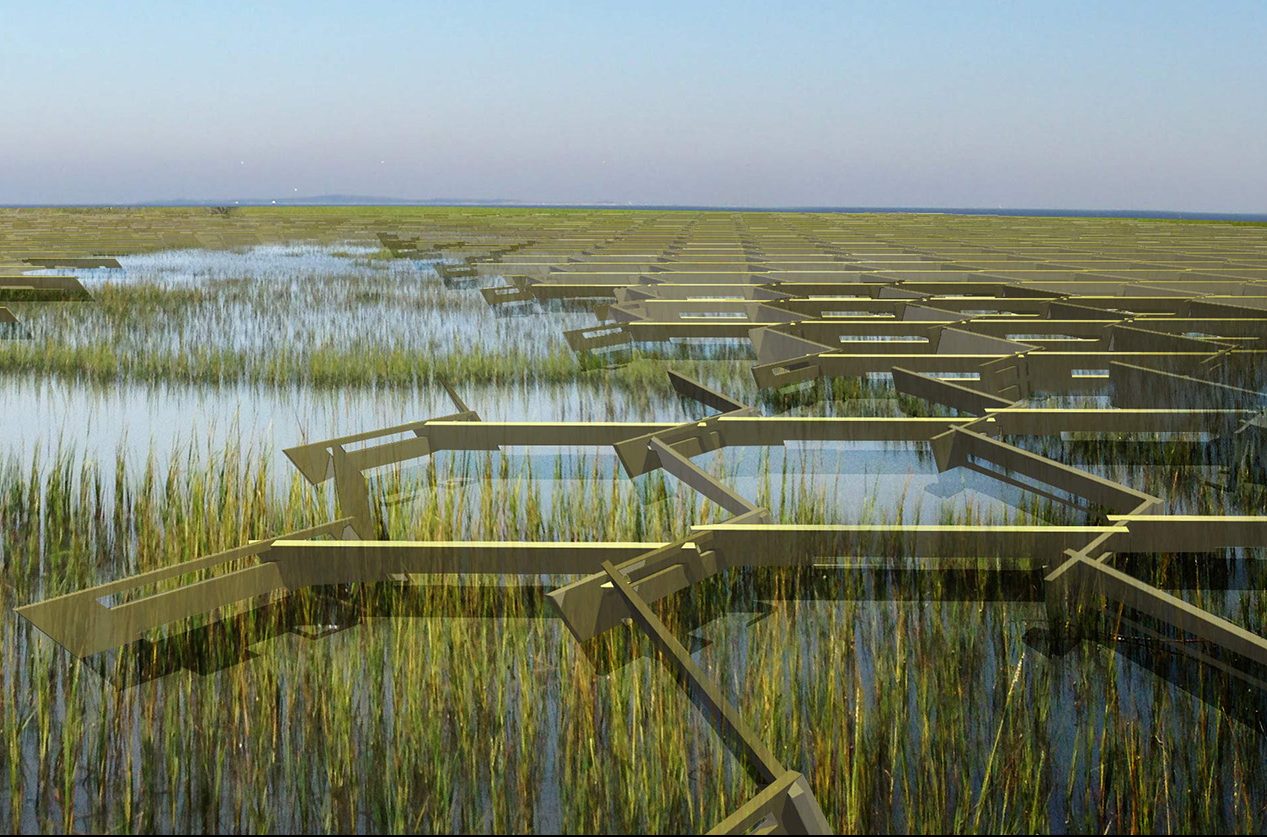 The machine is on the edge between existing and future landscapes. The old landscape provides the plastic waste, the Wadden shallows by the east coast of Texel provide the sand and silt. The machine building crosses the border and acts as a catalyst between the two metabolic flows. Envisioning the Anthropocene treats the machine building as a cultural as well as a technical artefact. It is both positioned and designed in a way that is symbolic of the function of the building. Its architecture is such that it may function organically within the existing network of systems of the island. At the same time, it is an extension of the public domain and in this way becomes the interpreter between the strictly specific technical process and the society that benefits from it. The proposal defines a friendlier status of this typology with regard to the landscape and society, offering it the possibility to be appreciated for its actual value as a machine building rather than ‘post-mortem’ as a historic artefact.

The design is conceived as a play in three acts – introduction, conflict and resolution. These correspond to the technical processes – deliver and sorting (per plastic type), shredding and washing and, finally – production of the salt marsh frames. Moreover, each stage is positioned in a way that responds to its relationship to the island. The first is within the dike ditch (the plastic waste is still part of the island’s waste system), the second is across it (the plastic transcends to the next system) and the third is beyond it (the plastic belongs to the coastal system), where the new landscape will develop.

A crucial argument that Envisioning the Anthropocene illustrates is that when humanity has become a geologic force, it is important to think beyond the economics of infrastructure and industrial facilities. The collaboration between man and machine is stable and increasingly seamless. Thus, the architecture of infrastructure and industrial buildings should be increasingly more integrated with the context. In response to the ambition of the function it accommodates, the architecture of Texel’s machine building is designed to become a symbol of the metabolic exchange long after it has been completed. It will remain as a monument of humanity as a conscious geological force.

Architect, lecturer and researcher, based in Eindhoven (NL). She has been teaching at the Architectural History and Theory department at Bergische University Wuppertal with Christoph Grafe since 2015. Currently, she also teaches Architectural Theory part-time at Fontys University of Applied Sciences in Tilburg. Apart from her academic commitments, she is a research curator of Stichting We Are, a creative agency that brings design thinking into the practices of lawyers and human rights defenders. She graduated in Architecture at TU Eindhoven, where her project Envisioning the Anthropocene was nominated for Archiprix NL (2016) and Archiprix International (2017). The focus of her work is on how the meaning of architectural form relates to ecology and resilience.