How the largest food distribution system in the US works

Active, transversal policies for the sustainability of the food system

It’s the cities’ time. They are taking on an increasingly relevant role, beyond the scale of specific operation, with active and innovative policies, actions that promote networking among different subjects and exchange of good practices that make sustainability an indispensable element, in a fluid, often unstable geo-political picture, marked by tensions and mistrust. For example, the C40 network involves dozens of cities committed to dealing with the negative effects of climate change, while the Milan Urban Food Policy Pact (MUFPP), the international pact that unites more than 200 cities in more than 60 countries around the world (including New York and London), is committed to promote sustainable, fair food policies. As food is a ‘universal’ element, that involves everyone everywhere in the world, and it is a lever for crucial change concerning the challenges of this century.

From Expo 2015 to the Milan Urban Food Policy Pact

The commitment of the cities towards sustainable food policies is one of the crucial elements of the legacy of Expo2015, which had the merit of placing fundamental attention on issues related to food before, during and after the great international event held in Milan.
In February 2014, and thinking about Expo, Giuliano Pisapia, the mayor at the time, launched a global challenge to world cities by proposing a pact among cities that gave rise to the Milan Urban Food Policy Pact and, at the same time, asked for a specific commitment of the city of Milan on food sustainability, starting from the onerous and paradoxical problem of food waste.

The Milan Food Policy arose from that political will, shared with the Fondazione Cariplo which, from the very start, has believed in this transverse policy tool. It takes the form of a support programme for the city government, starting from an analysis of the context data, carried out in collaboration with all stakeholders in the food system: public institutions and private entities, research centres, universities and schools, to identify strong and weak points of the Milan food system, in view of sustainability objectives that combine the fight against food poverty with the commitment to the quality of agri-food production, access to healthy food for all with the daily choices available to citizens, starting from the youngest in school canteens, the fight against food waste by investing in an overall waste reduction system.

The local food system is highly complex and involves production, processing, the supply and demand system in both mass retailers and shops. Thus, a system that is part of global and local flows and potentially conditioned by the choices of townspeople, local policies and companies. 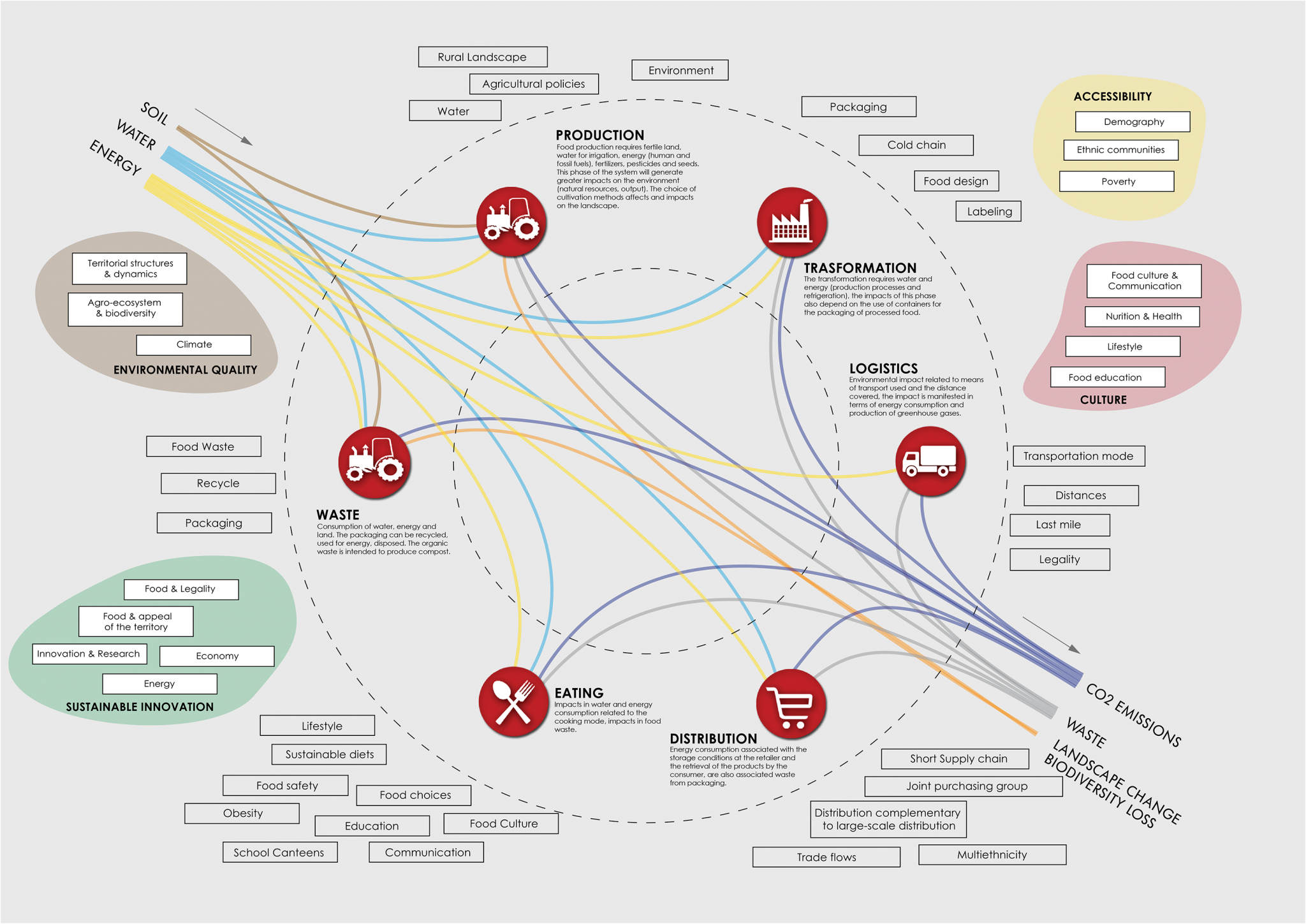 The research, carried out in 2014 with the aim of deciphering the local food system and understanding the connections and structures, operational processes and ongoing policies, was also accompanied by a path towards the involvement of townspeople with meetings in the 9 Municipi (Boroughs) and focus groups with experts, associations, firms and start-ups, and ended with a town meeting.

The importance of starting with a dataset of knowledge was an essential step in being able to act with a view to improving the system. As a result, five priorities were outlined for the Milan Food Policy, divided into 16 paths and 48 steps, approved by the City Council in 2015.

In 2017, I was entrusted with co-ordinating the strategy of the food system and its policy: the legacy of Expo2015  puts our city within a process that is both political, cultural and social, which requires a concrete commitment in order to ensure that ideas of innovation and change become practice and habit for our citizens. The programme lasts for 5 years and, as a result of the constant monitoring, an overall balance will be made and the aims reviewed this year together with the City Council.

The first priority of the Food Policy is to ensure access to food and drinking water for all townspeople. In fact, a lot of effort is still needed to tackle food poverty, both in terms of access to a balanced and adequate diet for everyone and attention to the food healthiness. There are a lot of ongoing actions on this, particularly with the Programma QuBì, the recipe against child poverty. The ‘Frutta a metà mattina’ (Mid-morning fruit) project takes fruit into schools for a snack, in cooperation with Milano Ristorazione (a municipal enterprise), responsible for school dinners in Milan, which cooks and distributes 85,000 meals a day and is an important, historical driver of the city. In this way, we are committed to making our diets healthier, promoting a change in eating habits and reducing the waste that also occurs in schools during meals. An action of cultural change and attitude towards food that starts with children.

The aim of sustainability of a quality production system – environmental, social, economic and cultural – is also achieved by promoting the enhancement of short supply chains,  urban vegetable gardens (e.g. supporting the growth of educational vegetable gardens in schools) and by the determination with which actions are promoted to decrease the spread of disposable plastic. The Regional Development Framework Agreement ‘Milano metropoli rurale’ (Milan, a rural metropolis) and the projects for rural development allow to enhance the local production of food products in the peri-urban area and the exchange of these goods through local market networks, collective catering and in view of mass retailers. This is a great challenge which, however, brings back to the centre the idea of the recovery of communication and space between city and country. The agricultural areas and many other players are part of this.

Food education, i.e. agri-food education, is the third priority of the Milan Food Policy and foresees an educational, training and communication commitment to promote a change in dietary styles, in constant dialogue with the players in the city who offer scholastic and after-school dietary education projects.

As already mentioned, the strategic aim for the Milanese Food Policy is to combat waste (fourth priority), aligned with Target 12.3 of the UN Sustainable Development Goals which foresees halving it by 2030.

A network of over 100 players contributes to projects on this theme, the Food Policy office of the Municipality of Milan is available to coordinate, promote and facilitate everything that moves in this area, in particular through the creation of Communities of Practice that allow the exchange of experiences, ideas and practices, and district hubs against food waste for the collection and distribution of the surplus to the needy in the neighborhoods.

The first districthub against food waste, in Via Borsieri in Municipio 9, has just celebrated its first anniversary (14 January 2020), substantially showing the effectiveness of the initiative. The Politecnico di Milano studied the flows of surpluses arriving at and leaving the hub and showed that about 80 tonnes of food, equivalent to 154,000 meals, can be recovered in one year involving 21 local non-profit associations and reaching more than 4,000 people.

We want to continue to increase this experience in other neighborhoods of the city, involving more and more people ‘near’ to the hub – supermarkets, associations and companies with canteens – that allow the establishment of a fruitful flow of relations with the local social fabric.

The ongoing actions and projects today are numerous and involve different subjects within and outside the administration. Among many, one will be implemented in the Gallaratese / QT8 district, where a feasibility study has been launched for the realisation of urban regeneration activities through the creation of a widespread orchard.

As a result of the work of the last few years, we think that cultural change is in progress – more and more young people are asking to give a real contribution which is an investment for the future of the planet. All this is also possible through the continuous search for active co-operation with local bodies and, for this, also in 2020, our aim is the increasing involvement of townspeople and those who really implement the practice. Therefore, we’re suggesting meetings and exchanges like the Communities of Practice, places for listening, discussing and trying out the ideas and effective models of education, research and implementation of sustainability. There are many topics – agri-food education, reduction of food waste, short supply chains, city networks, educational vegetable gardens and many others will be in this year’s programme. 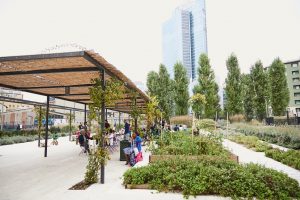 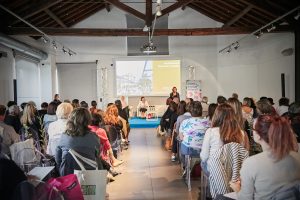 So a lot of developments and a lot of work. The Administration’s commitment goes towards greater sustainability of the food system and this was also recognised internationally in 2018 with the Guangzhou Award for Innovative Urban Policies.

Implementing one’s food policy is a challenge for every city that leads to in-depth knowledge of their food system and needs, therefore to identify objectives, demands, tools as well as interlocutors with which to get to work and plan specific actions to make systematic changes in the operation of the processes.

The next few years will be very important to monitor the growth of the first seeds planted in the last five years.

Anna Scavuzzo is Vice Mayor of the City of Milan and deputy mayor for public safety. From 2017 she is also in charge for the Milan Food Policy. Within an innovative framework of the food system governance, she is developing actions in several fields: reducing food waste, circular economy for food, local public procurement, food startups incubators, facilitating joint efforts of thematic deputy mayors and municipal departments. In the role of political referent for the food policy, she had the opportunity to participate in the international debate about urban food policies in several high level events in Dakar, Stockholm, Tegucigalpa, Vilnius, Washington and Tel Aviv, at events organized by the C40 Food System Network, the Eurocities Working Group Food and the Milan Urban Food Policy Pact. As the former deputy mayor for education, she worked closely with the municipal agency for school canteens (85.000 meals per day) and she promoted policies for a more organic local procurement and healthier diets. As city councillor, in the mandate 2011-2016, Ms Scavuzzo focused her attention on the rural-urban linkages, becoming also metropolitan councillor and member of the board of the Agricultural Southern Milan Park (43.600 hectares with 1.400 farms). Master degree in Physical, she worked on the applied info technologies, data analytics and public administration learning tools for a leading editorial group.