Developing Public Transport in a Megalopolis

The organisation of the transport plan supporting an international sports event is always a great challenge – and even more so if it’s hosted by the Italian capital and one of the most important roads in the main productive district in Rome has to be closed in the middle of the working week.

This was the challenge facing a team of engineers and communication professionals from Agenzia per la Mobilità (Rome mobility agency) for about six months.

Let’s look at the numbers involved:

The numbers of the Formula E Grand Prix in Rome

These numbers give an idea of the complexity of the work and the commitment necessary to plan the mobility for such events. In this specific case, the technical work starts with the first operational meeting five months before the event each year, and ends three months after it with the usual final report of the work and analysis ex post of the impact on the road system.

From the purely mobility point of view, the main, and certainly most challenging, aim is to respect the planning of a mobility scheme able to cope with the closure of Via Cristoforo Colombo, from Wednesday evening to dawn the following Monday, at the same time ensuring accessibility to the EUR district and the connections with the more central areas of the city normally guaranteed by the Via Colombo route. The plan considered all the components of the demand – vehicle traffic, public transport, and pedestrian mobility for both the users of the EUR district (workers and residents) and spectators of the events, differentiating the management policies for each sector of the demand.

The Mobility Agency gave support for the first E-Prix of Formula E mainly in two macro areas – planning and development, and communication.

The Study Area – EUR, the most important business centre in Rome with more than 30,000 workers

As usual, the real planning work was preceded by the analysis of the study area in terms of buildings and mobility so that the urban fabric setting of the operation (workers and residents), and the demand for mobility in the area could be assessed. An evaluation was also made of the road network performance using floating car data (a fleet of vehicles equipped with a GPS device) which enabled generation of the speed profiles for each hour and day of the week in the roads in the area.

These preliminary fact-finding analyses allowed a mobility scheme able to minimise the impact of the diversions and road closures in the area of the circuit to be planned, distributing the usual demand in the closed section of Via Colombo over several main alternative routes. For medium-length journeys, the closed part of Via Cristoforo Colombo will be substituted by the consular roads in the southern quadrant of Rome, conceived as two-directional roads for connection with the centre, and the Grande Raccordo Anulare (GRA – the ring road around Rome) as a route distributing the flows along the alternative routes.

The routes closest to Via Colombo – Via Laurentina, Via Ostiense and Via del Mare – are those where the planning work was concentrated to define action able to increase the flow capacity. 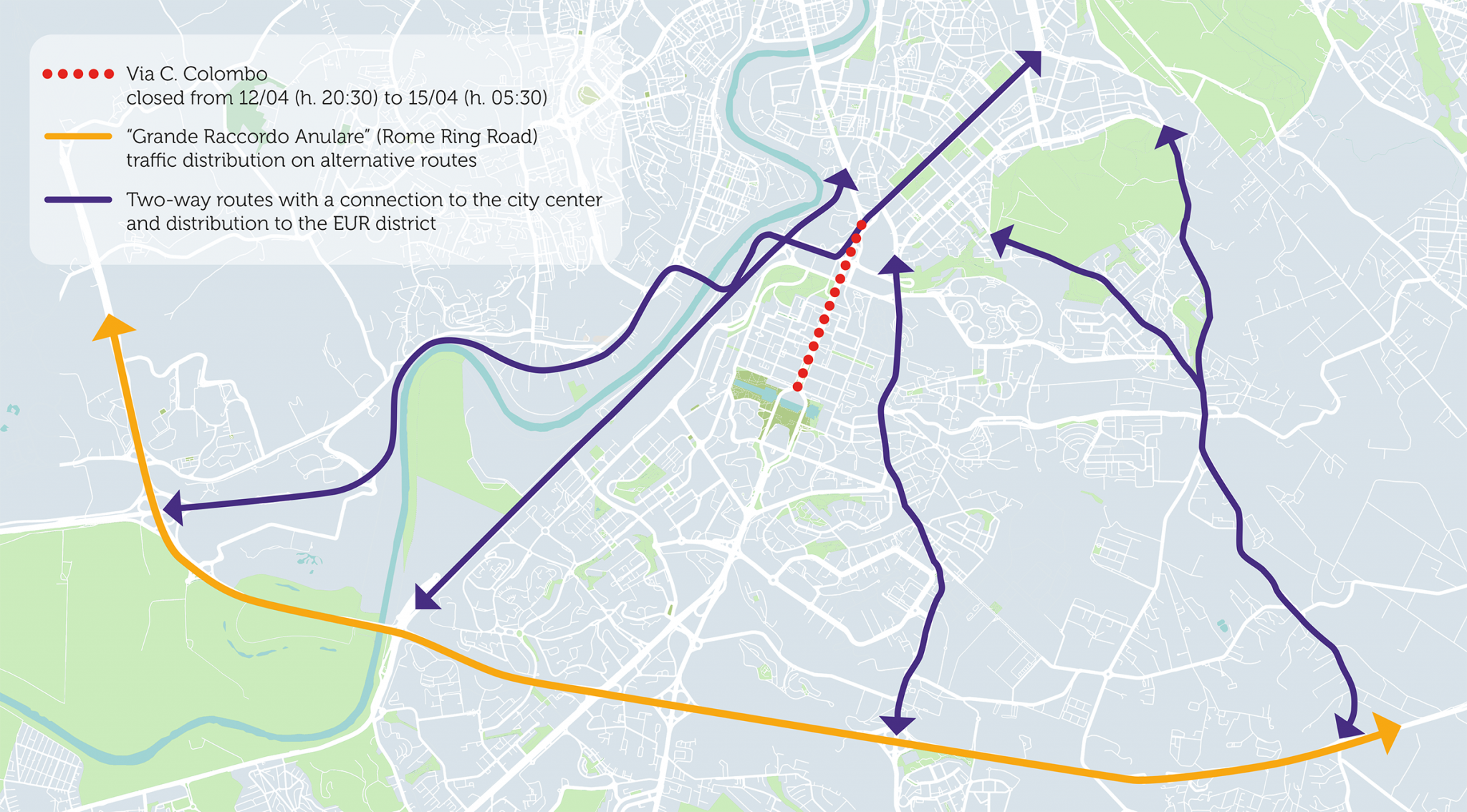 Closure to traffic of Via Cristoforo Colombo and alternative routes 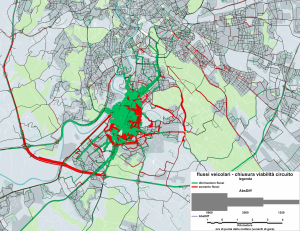 Difference in flows between the current situation and the scenario of the Friday of the race. Morning rush hour. Extended area 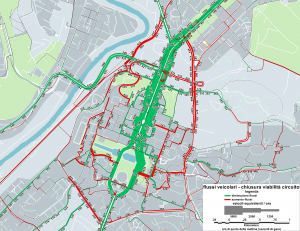 Difference in flows between the current situation and the scenario of the Friday of the race. Morning rush hour. EUR context

The project circulation scheme was also analysed through a macro-simulation model of the traffic, to decide the routes on which the diverted flows would mainly be distributed so that the management policies could be differentiated. Use of a simulation model enabled indication of the extension of the impact on traffic, invaluable information for all the subsequent project work, such as the provisional signage project with limitation signs (90) and direction signs (27 1.35 m x 2.00 m in size, on a yellow background, to be installed for the event and then removed).

The scheme of the manoeuvres and phases of some traffic light-controlled intersections were changed to mitigate the effects of the road closures.

As is logical, the creation of a city circuit had an impact on parking with the progressive reduction of parking spaces. To limit this impact, a reconnaissance was made to find alternative parking areas able to meet the demand for parking spaces by workers in the EUR on the days the circuit area was closed and that of spectators on race days. 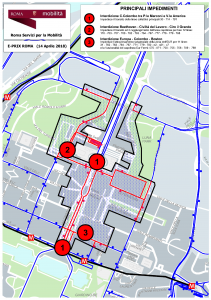 Given the important limitations to road traffic and the reductions in available parking spaces, great attention was paid to planning the public transport network.

The EUR area is served by an effective network of collective transport:

When planning the network, account was taken of some important obstacles relating to the ban on transiting, the impossibility of reaching the terminus and the ban on crossing the bypass in the EUR area for some bus lines.

The plan also concerned pedestrian access routes to the circuit and the taxi and car sharing services.

An essential requirement for limiting problems for users was the planning of an adequate information campaign to make road users aware of the planned changes. This was intended to obtain two basic results:

On this, the Mobility Agency of the Municipality of Rome was in contact with the operational centres of Autostrade dei Parchi, ANAS and Waze with which the details of the traffic plan (closures and diversions) were shared so that communications could also be distributed through their channels, thus increasing the number of informed users. The topic was also dealt with in the annual meeting with the mobility managers of companies and schools in the EUR district.

The diversion plan for the public transport network was advised as follows:

Monitoring and assessment of the impact

Lastly, the mobility plan was flanked by an ex post assessment of the impact of the road closures on both the roads and the public transport network.

In detail, 13 two-directional routes were monitored (for a total of 26 sections) corresponding to all the consular routes from south-west to north-east between Via Aurelia and Via Appia. Similarly, the southern arc of the GRA between the ends of the above-mentioned slip roads were also monitored. Overall, the campaign concerned about 150 km of main roads for a total of 2 months, from 27 February to 27 April 2018.

Travelling times over all the 26 road sections mentioned above for the days of complete closure for the circuit, differentiating the working day of Friday from Saturday, were analysed.

Generally, the diversions and road closures worsened flow conditions in the study area because of an increase in the average travelling time. On average, there was a worsening of 19% and the most critical time was between 9 and 10 am on the Friday of the race. The greatest reduction of speed was 73% on Via del Mare (from the GRA to Viale Marconi).

Trends in the numbers of passengers passing through the turnstiles of Metropolitana B in the stations of Marconi, Magliana, Eur Fermi, Eur Palasport and Laurentina were analysed to assess the impact on the public transport network. The analyses covered a period of three months around the event. In particular, all Fridays and Saturdays were compared so that the difference in consumer behaviour in the week of the event (race) and the two weeks immediately before and after could be seen.

There was an increase of 17% on the Friday compared to the average on Fridays in the period. This increase rose to 73% on the Saturday, proving the positive effect of the communication plan about more rational use of the collective means rather than the private vehicle.

Daily access monitoring at Metro B Stations (period March – May 2018, Saturday only)

For the organisation of the transport plan supporting an international sport event to be successful, there must not only be careful planning and development but attention must also be paid to how communications are made to the user so that they are given the correct information promptly, ensuring correct and, as far as possible, fluid urban mobility.

Lastly, an empirical check on the results of the choice of planning must be made, analysed and turned into lessons-learnt for the organisation of future editions.

Marco Cianfano graduated with a First in Civil Engineering at the University of Rome Tor Vergata in 2006. Since 2007 he has been a member of the Institute of Engineers of the Province of Rome and has been enrolled in the Commission for Traffic Regulation Systems in the Institute since 2013. He works in the Mobility Agency of the Municipality of Rome where he is head of the transport planning sector. He is specialised in macro- and micro-simulation studies and modelling of support to transport planning. Over the years, he has been project leader in traffic and environmental studies and feasibility projects, in both urban and international co-operation projects. The main positions he currently holds include mobility manager for Rome for the European football championships EURO UEFA 2020 and the E-Prix of EUR Rome in the Formula E championship, and head of transport assessment in support of the Urban Sustainable Mobility Plan of Roma Capitale.