In the era of Greta Thunberg and climate change, new words and new concepts gain space in our conversations; new words that talk about new lenses to see with, interpret and decipher the world, and sustainability, impact and social innovation are among the most useful for understanding the transformations of contemporary life. A hype that obviously started a long time ago – in 1972, Club Roma had already talked about social innovation in ‘Limit to Growth’, describing it as those innovations able to keep environmental, social and technological sustainability together.

An approach which, also in the light of the most accredited tendencies in doctrine, looks at social innovation as processes or flows and not as tout court products. Flows that redesign and redefine the social space, increasing the capability of individuals and/or social groups and thus opening new areas of discussion and new opportunities to change reality as we know it.

Opportunities that are also contaminating the traditionally more conservative sectors, for example finance, where the percentage of capital and investors oriented to moderating the Holy Grail of Return on investment with the legendary Shangri-la of social impact. A contradiction considered insuperable until a few years ago which now finds (un)suspected elements of conciliation and agreement.

What do we mean by impact investing?

Quoting Raymond Carver to talk about impact investing has a certain effect, yet the central idea of the great American writer’s 17 stories that we can think and talk about certain things that exist (and are important) even if we don’t know exactly what we’re talking about, fits the bill perfectly. In the era of collective ingenuity, great tales are written by default. The control of the different domains is less and less certain and increasingly governed by information flows which seamlessly shape the necessarily mobile borders of the different disciplines. From this point of view, the most accredited definition is the one suggested by the Global Impact Investing Network (GIIN) in the document “Introducing the Impact Investing Benchmark”.

“Impact investments are operated by specific funds or other interested parties so that a social and environmental impact is generated in addition to a financial return.”

So, it’s an area of finance which features sharing the investment risk, the declared intention of producing a positive impact, the need to remunerate investors and to clarify the non-monetary value produced in the light of the shared metrics and indicators.

Ten years from the start, the experience of impact investing has become mature both in terms of the tools used and the resources actually allocated. Today, as was shown in the global summit in New Delhi last October, a turning point has been reached, i.e. whether to adapt the Anglo-Saxon scenario, strongly financially centred, to, on one hand, the more rigorous approach of continental European economies, more accustomed to historic social economic models and, in particular, more inclined to the statutory principles based on EU-regulated models (such as the EUSEF and EUVECA funds) or, on the other, the need to support inclusive, generative business models of social and economic development, as in South America and Africa. An urgency of contamination and ‘localisation’ that reflects the genesis of impact investing, which develops in the heated discussion and debate between philanthropic players, traditional financial institutes and PA, as is shown by this graph (source: PlusValue) 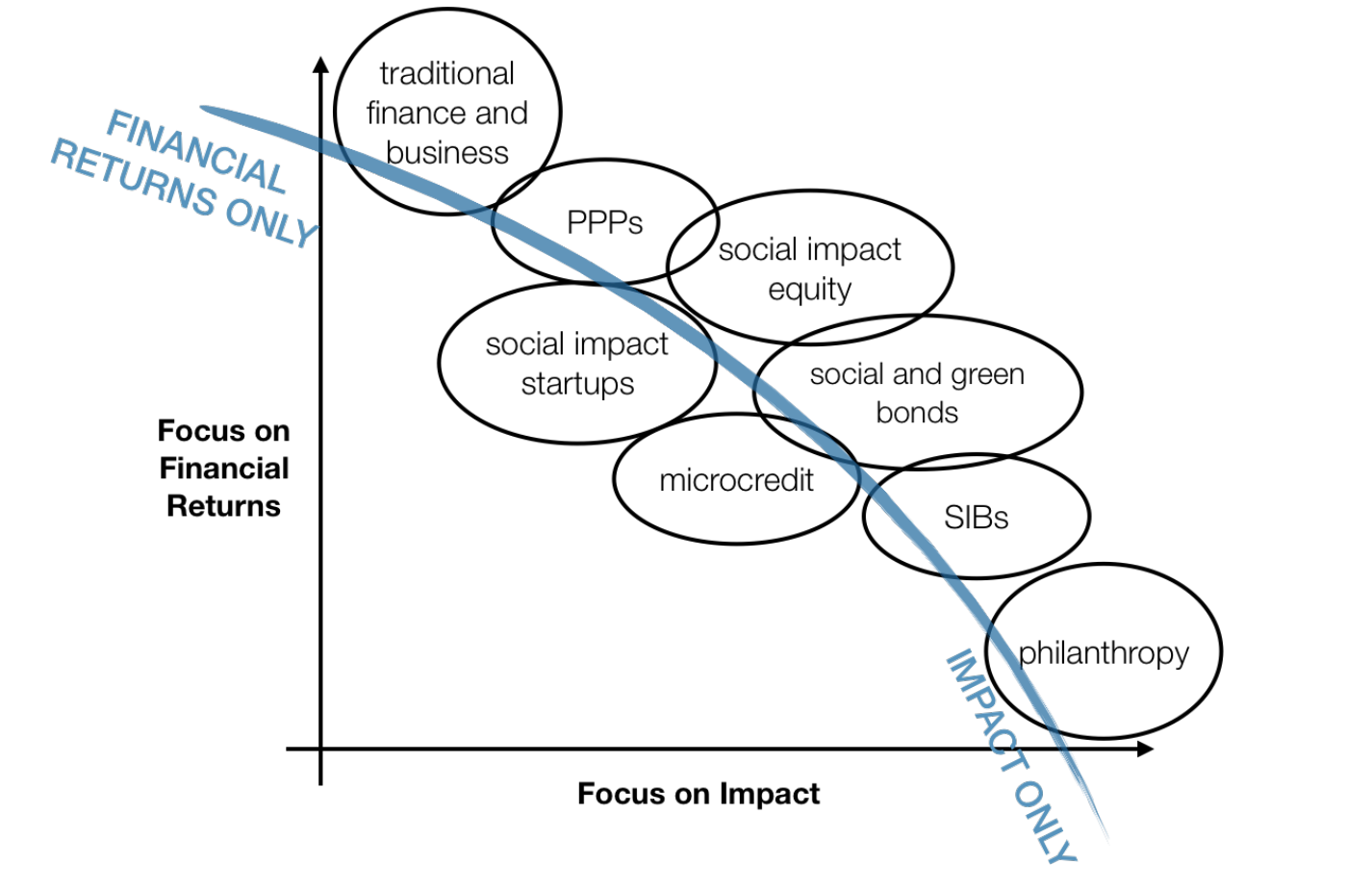 The importance of the ecosystem

In this, we can read and interpret impact investing as a light infrastructure, i.e. the fixed share capital necessary to convey flows of resources to generate the hoped-for change in communities and areas. Instrumental equipment intended to enable an ecosystem consisting of a plurality of players (financing bodies, service providers, evaluating bodies and PA) which need to create a common language that can reduce the information asymmetries between the players, align public and private interests, generate savings for PA and promote innovation to implement the hoped-for impact in full. This challenge is still a long way from being won and requires effort from the system, overall vision and a series of enabling measures able to increase the scalability and replicability of the experiences. Above all, it requires a rethink of the role of finance in our society, removing it from mainstream simplifications, strengthening skills on the side of the demand (firstly social, natural and correct enterprises – potential, recipients of the measures) and constructing incentive mechanisms on the offer side (broadly speaking, financial institutes).

We’re still taking the first steps on this point in Italy, but there is some experience, such as Social Impact Italia, the initiative promoted by FEI and the Cassa Depositi e Prestiti, intended to support the inclusive economy through a fund of Euro 100 million or Oltre Venture, the first impact investing fund in Italy. On the private, or demand side, new generations of social enterprises consider the topic of impact as a lever to promote more advanced forms of sustainability.

Giving value back to value is the mission of Open Impact, the first digital impact assessment platform promoted by the co-operative ULIS to strengthen the economic sustainability of social enterprises, highlight the effects of their work on the direct and indirect beneficiaries through careful measurement and assessment of the impact, and incorporate these elements into their communication and development strategies – and also be the contact point between the world of impact investment and the social enterprises segment. A platform that intersects two lines of emerging trends – social urgency and the policy of quantifying and remunerating the value traditionally not envisaged by financial metrics and the progressive digitalisation of services and activity (the famous “software is eating the world” of Marc Andreessen, the former editor of Wired).

Open Impact’s value proposition arises from the intersection of these two orientations – transfer what, to date, has been a strongly analogical activity into digital, radically reducing information and co-ordination costs, building advanced discussion between bodies that tend structurally to impact, and the possible financers, promoting new responses to complex problems – for the many, not the few.

Giorgio Baracco is a partner in ULIS, a co-operative, CEO of Proteina, a lecturer at Master Memis and an entertainer at the Espresso Coworking community, the non-conference on employment and co-working topics. He has always been involved in social innovation.