Bike paths to improve environmental conditions in cities and urban…

The situation in Germany
Specialist article

Cycleways for the redevelopment of the country

The idea of a ‘cycle culture’ is growing in South Tyrol. The key words are movement, respect for the environment, recreation and alternative

“Did you know that 28% of the journeys in Bolzano are by bike? Cycling is good for the health and environment, and contributes to the creation of a healthier and more liveable city.”

This is how the Municipality of Bolzano has promoted use of the bicycle for many years. The city now leads the Italian classification as the ‘most cyclist-friendly city’ and, in recent decades, has created a network of urban cycle paths that intersect for more than 50 kilometres and branch out in all directions connecting urban and out-of-town cycle paths with all the towns and many residential and tourist centres in the region.

It’s interesting to contextualise the subject in a wider view that takes into account recent data from Legambiente on the value of the Bike Domestic Product (BDP), i.e. the overall turnover generated by business connected to the bicycle in Italy. This amounts to Euro 6 billion, with the significant increase of 50% in cycle tracks from 2005 to 2015 (an estimated increase in a total of more than 100 county towns). Paradoxically, however, the number of Italians who travel by bike has not increased; there were 3.6% in 2008 and continued to be 3.6% in 2015 – a clear sign that strengthening or extending structures is not enough if, at the same time, there is no significant development in communications or the preferred cultural tools aimed at promoting an ‘alternative’ transport method.

This culture is often missing nationally and should be spread in a more tangible way at school. We shouldn’t forget either that the bike and motorbike sector powers a pool of about 60,000 workers and produces a turnover of Euro 5 billion. However, there are comforting signs for the future of mobility if we recall that, in 2016, the number of municipalities making bike sharing services available to their townspeople increased from 61% to 66%. Mobility but also intermodality, a word destined to become part of our future language. A survey conducted by Ambiente Italia showed that out of 104 county towns, public transport in 40% of the municipalities interviewed allows passengers to transport bikes, thus promoting mixed mobility. 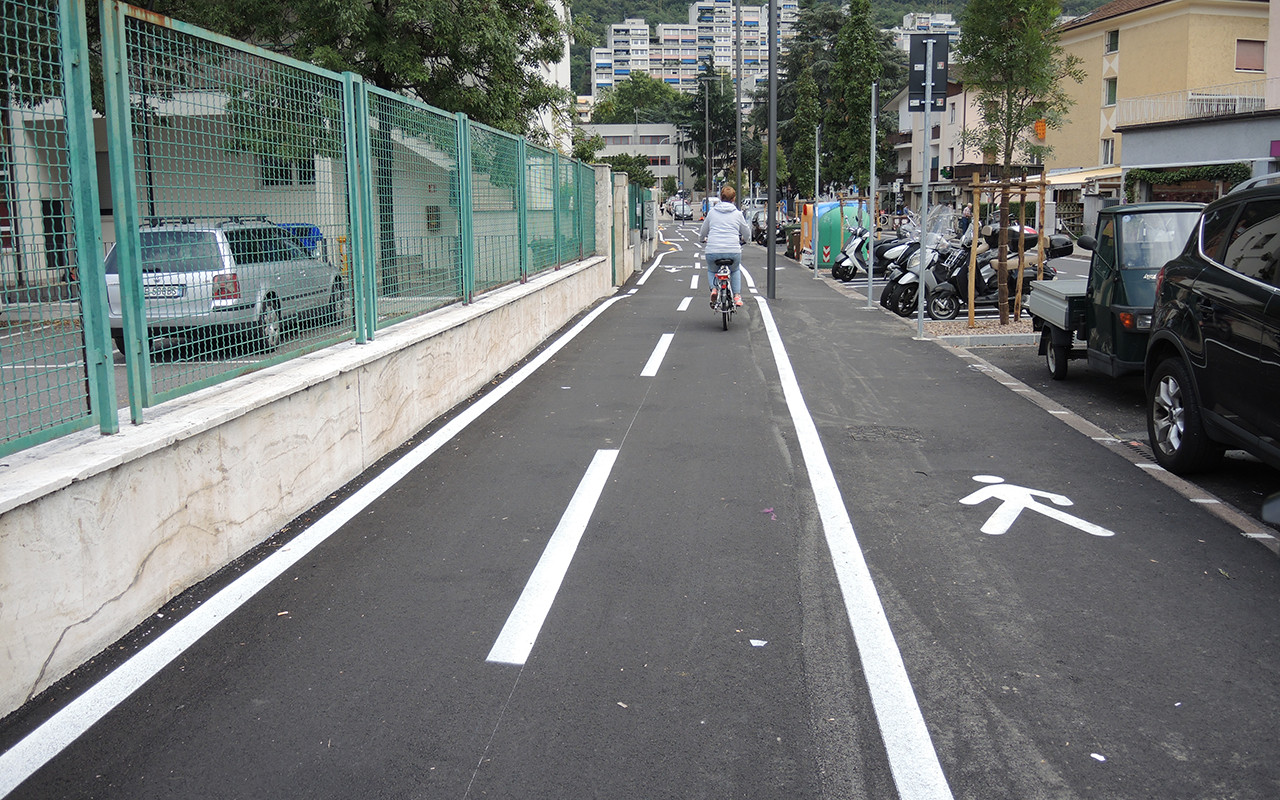 THE FIRST CYCLE PATH IN BOLZANO

A real cycle track was first constructed in Bolzano almost by accident in the 1980s after the transfer of the Bolzano-Merano railway line. The transfer freed the mountainous right-hand bank of the River Isarco making it available for other uses – a recreational track for bicycles to put alongside the pathway. This initiative was so successful, also due to its position and the advantage of being an access to the city centre, that it started the creation of a ‘cycle culture’, different from the current health enthusiast trend, where use of the bike as an alternative means of transport has spread more and more thus forcing the council to give precise answers on infrastructure. A network of new paths developed. The specific geographical layout of Bolzano, crossed by three rivers, and also the particular arrangement of the main school and sports complexes along the river, were the trigger for the creation of the first network of cycle paths that form the backbone of the system.

THE VALUE OF THE CONNECTION

As a result, the bicycle has become the alternative means of transport par excellence in town. Additional cycle paths have been created over the years working within a general reference plan that sets out the connection of all municipal school, sports and recreational areas so that a sort of large ring around the city centre is formed. This has generated a network able to provide a good response to residents’ demands, thus enabling the passage from an almost exclusively recreational use of the bicycle to its systematic use for ‘home-school’ and ‘home-work’ journeys. Roads are rarely wide enough to allow cycle paths to be created without interfering with parking, albeit temporary. Where such an operation was considered to be of high value, parking was completely banned or regulated differently trying, moreover, to recuperate at least some of the parking spaces lost through the redesign of parking in adjoining roads.

The recent transformation of the industrial area into a production and services area has resulted in the decommissioning of several stretches of railway that led directly to the main factories and has enabled their use for the construction of cycle paths.

The new Urban Traffic Plan confirms the municipal council’s aim of promoting the use of alternative means of transport and co-operation with neighbouring local councils for the creation of inter-municipal cycle paths, included in the provincial development plan, has been activated. Every out-of-town cycle path also includes the possibility of using the train to transport bikes on the longer, more difficult paths.

The landscape is changing – hotels for cyclists, mobile workshops, infopoints, hire points, bike racks near stations, specific road signs, and Bicycle Barometers (monitoring stations), an integrated system able to measure the frequency and passage of bikes along these paths, are springing up. A series of projects like ‘Bolzano in bici’ (Bolzano by bike) and ‘Bicicaffè’ (Bikebar) and initiatives like ‘green mobility’, a project devised to make Trentino/Alto Adige a model area for sustainable alpine mobility in all its forms, have started. The main points of this project are electromobility, intermodal transport and cycle mobility with the aim of improving traffic, transferring it and, in the best-case scenario, eliminating it. In total, the Alto Adige cycle network has more than 500 kilometres of cycle paths plus many mountain tracks that allow peaks to be reached by bike.

A last reflection – we need to start thinking (and being convinced) that alternative mobility schemes are more and more sustainable and essential because they not only allow the return of a ‘slow’ dynamic of lifestyle but also offer new opportunities for relations with the environment. A ‘slow’ style doesn’t mean ‘inactive’ but, instead, a different sense of time in favour of greater individual and collective wellbeing, as well as greater awareness of being part of a whole.

Alexander Zoeggeler was born in London in 1970. He studied Architecture at the University of Florence. At the beginning of his career, he worked in Florence and Vienna and then, in 2004 he became a partner in Studio Zoeggeler Architetti in Bolzano. Over the years, he has held various positions on the Board of the Professional Association of Architects and in the Architects’ Foundation of the Province of Bolzano-Alto Adige. He is currently chairman of the Südtiroler Künstlerbund.