Scatter plot from the processing of Laser Rail surveys. By Net Engineering

Tool for the dynamic survey of an infrastructure and its context

The design of a transport infrastructure and the associated technological systems requires an approach based on a systemic view that takes into consideration all the elements of the overall design mosaic – transport performance, route with the position and inclusion of stops, distribution of the power supply networks and technological systems, features of the rolling stock in relation to the route and mission profile (best route and best means of transport), check on the circulation features in terms of shape and safety, road-rail interaction (consumption and maintenance costs, noise, vibrations, interference with basic services, etc.) and the choice of system, equipment and spare parts for maintenance.

The starting point for the technical work, from the feasibility study through to the executive design, is the reconstruction of the general cognitive framework that begins with the survey of the condition of the property. The Mobile Mapping System (MMS), a laser tool for the dynamic survey of an infrastructure and its context, makes a careful survey of the condition of the property through the acquisition of a scatter plot enabling the creation of a digital 3D model (BIM) of the operation. The digital survey supplies basic data in which the proposed route can be entered and an immediate evaluation of the extent of critical points of each solution assessed. It also enables technical checks to be carried out easily on the activation of the infrastructure along the route and the circulation features of the rolling stock. This integrated survey system allows designers to deal with the problems linked to the technical feasibility of the project quickly and effectively, particularly from the point of view of the circulation features, checking that the kinematic shape of the vehicles is within the space available, taking account of each element along the route (tram stands, signalling, etc.). Checks on details, particularly on the critical points highlighted by the analysis made with the MMS, can be deferred to a later, static, topographic survey, limited to exact, localised situations.

Consistent with this orientation, NET Engineering started to use the MMS system in the design of linear infrastructure some time ago, straightaway acquiring a 3D scatter plot with centimetrical precision and such high density that a faithful reconstruction of the condition of the property is given. 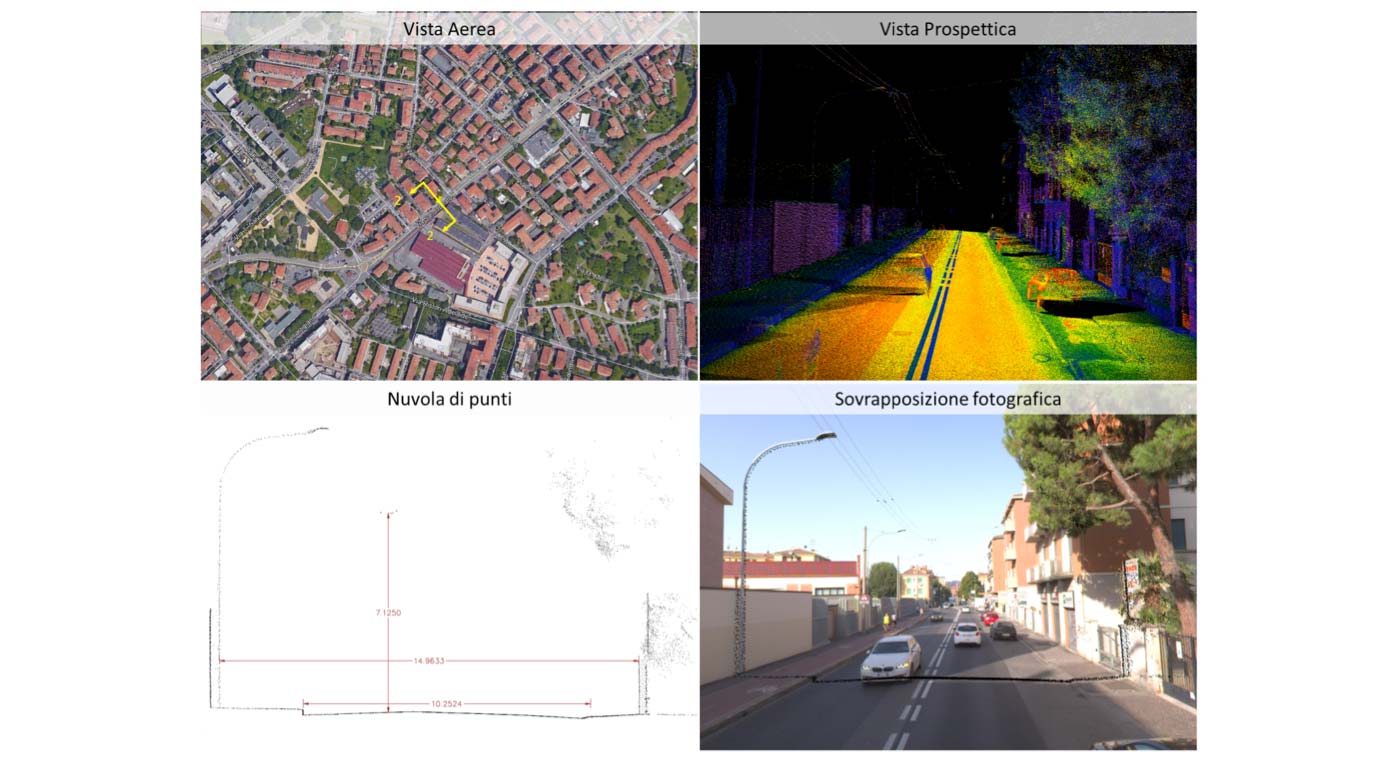 Example of table showing the scatter plot surveyed with the MMS system used to check the circulation features of means of transport.

As a result of the availability of the digital model, work can be carried out from the very earliest stages with a view to the digital integration of the design, with an interoperable BIM approach favouring the spatialisation of the infrastructure and the adoption from the beginning of a 3D model that facilitates project information for stakeholders. In addition, BIM centralises all the project data in a digital model and favours interoperability between different, multi-disciplinary development teams in various places. The same basic project data can be organised in geo-referenced databases thus systematically and effectively becoming available for the different scenarios. Then the passage from the 3D display to modelling on the times axis (4D) and, lastly, the addition of the costs (5D) can be made.

The dynamic survey generates further advantages for the designers. From the very specific view point of the rolling stock, it first and foremost enables analysis to be made of the maximum sizes of the rolling stock, the geometry of the rail (plan, profile and lifting of the track) and the future position of the contact line (attached to buildings, poles on the platforms or at the side, or between the rails) or alternative power supply systems (conductor rail, etc.). It also enables the analysis of the vehicle-infrastructure interaction and interoperability during design and construction, and efficient production of operation and maintenance. The Mobile Mapping System favours the check on the environmental compatibility and the performance of the rolling stock, and also the development of a register of the sub-systems making up the infrastructure for its management and maintenance.

As a result of the information acquired with this method, as mentioned above, specific analyses can be carried out easily through the definition of the 3D, interconnections with the existing network and compatibility with the planning elements and geometric restrictions. We have tried the Mobile Mapping System successfully in various contexts:

Use of the Mobile Mapping method will be presented during Net Engineering’s participation in Smart City: Materials, Technology & People (Superstudio Più, Via Tortona 27, Milan, on 17 April-12 May 2018) and the discussion Intermodalità: prospettive future per la rete di trasporto pubblico e la mobilità cittadina (Intermodality: future prospects for the public transport network and urban mobility) to be held at 6.00 pm on 3 May 2018 (Superstudio Più, Via Tortona 27, Milan).