Developing Public Transport in a Megalopolis

Riyadh, the capital of Saudi Arabia, was once an oasis in the middle of a vast desert. Its development only began in the middle of the last century but it rapidly drew it out of the Middle Ages into the modern world. Its population exploded from under 100,000 to 5.2 million in 2010. It is expected to reach 10 million in the next ten years.

Today, Riyadh is a dynamic, extremely self-confident metropolis. In recent decades, the urban development has closely followed the American model with a sprawling, checkerboard-like settlement pattern and efficient, multi-lane roads. The population relies almost exclusively on cars for mobility. Public transport consists of some bus lines, mainly for interurban connections, and some school buses and private goods transport services. Passenger transport on some major roads is a seemingly unorganised system of rides in old mini-buses with neither a timetable nor a systematic cover of the area.

At the end of the 20th century, the responsible authority (Arriyadh Development Authority, ADA), recognised that this type of development was not sustainable and developed a large-scale approach for the future of Riyadh through the 1997 ‘Metropolitan Development Strategy for Arriyadh (MEDSTAR)’ (renewed in 2004). For the first time, this set out clear objectives for a modern public transport system. The ‘Comprehensive Public Transport Plan’, a basic plan which sets out a hierarchic system of local public transport based on a highly efficient core railway network, integrated with Bus Rapid Transit (BRT) corridors, with a network of scheduled buses serving the main roads, supplemented by local transport in the form of smaller buses covering the whole area.

After supporting private transport for decades, the Riyadh development authorities commissioned teams of international planners in parallel contracts to design both the underground and the road vehicle-based systems. Various western planners were therefore called on to carry out analyses of the transport, studies of the system, the infrastructure projects, formulate the requisites for vehicles and the complete technical equipment, and develop a fare system. In addition, the client was also provided with operational support regarding the stages for the implementation of the whole system and the structuring of the tenders.

The Arab Challenge
Such a project would involve multiple challenges even in a European city. In an Arab country, consultants and planners from Europe had to act self-critically to prevent the automatic transfer of their own principles and experiences in an Arabian society. The specific features of each context need to be reconised and taken into account when transposing the approach to modern public transport.

One of the main challenges to be faced in designing a public transport system in Riyadh is that there is no experience of modern local public transport. As a result, there are no well-developed administrative structures and specific procedures for planning, approval, financing, and management of the service. Thus, this type of procedure has to be introduced to administrative players so that they understand in detail the importance in relation to an extremely valuable transport system. The weakness of the institutional structures results in the lack of a capital of information and indications that is supplied by customers, transport associations and the authorities involved in the issue of approval to guarantee an economic, safe and attractive local public transport service in synergy with the transport companies. Many workshops were held with the clients on the assignment of roles and responsibilities to deal with this problem.

Another particular aspect is that Arabian business culture aims at economically autonomous contracts. For local public transport, this would mean the separate management of buses and the underground, and possibly even of the individual lines, thus requiring the purchase of a new ticket each time. This is completely contrary to our concept of seamless public transport with coordinated timetables, a unified fare system and transvers infomobility.

Another challenge that the planners had to deal with was the decision-making process. In a profoundly different culture, which remains partly inaccessible due to the language barrier, it is not always easy and immediate who needs to be spoken to for each decision. Work is often done on the basis of decisions and approvals subsequently questioned ‘from above’ and revised with no possibility of influencing them. 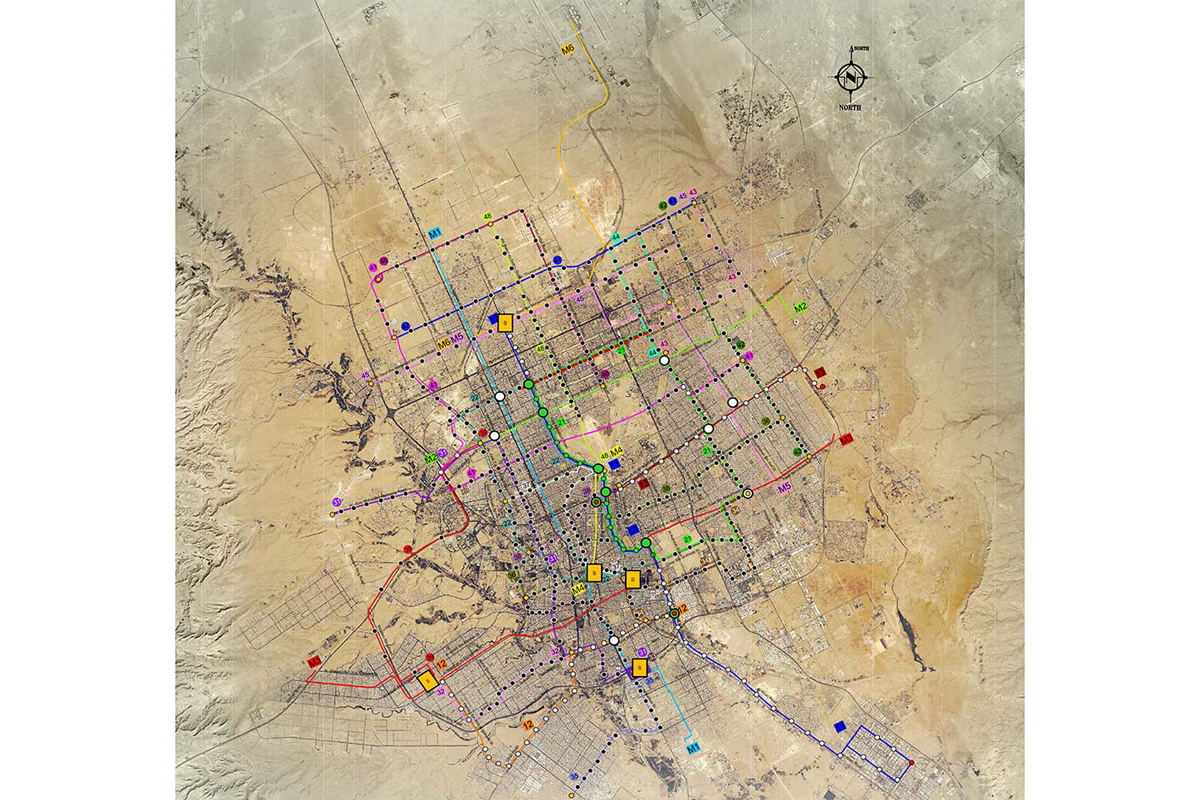 The awareness of the need for local public transport has clearly grown with the progressive overloading of the road network. From the infrastructure point of view, the designer’s challenge was to include bus lanes in a congested road network. Detailed work was performed at one stage of the project to find solutions for the inclusion of bus lanes for the BRT lines compatible with the flow of traffic and create alternative routes for heavy traffic in especially critical areas. The positioning of the bus-stops was equally meticulous so that, on one hand, the busiest destinations were effectively served and, on the other, the system was accessible to users in the greatest safety.

Subsequent challenges were also due to local culture. First and foremost, the positioning of the stops. While the area in front of a house is generally public property in Europe, it is part of the house in Riyadh and so belongs to the home-owner. This means that the space for building the infrastructure of a station infrastructure (air-conditioned waiting room and passenger information system) must be negotiated with and acquired from thousands of private persons, thus greatly limiting the density of stops. However, stops that are too far from each other are an incentive to using the car, particularly in an extremely hot city like Riyadh and a culture not used to moving on foot in which ownership of a car is still considered a powerful status symbol.

In such a situation, an image of the new transport system had to be constructed that was considered attractive, innovative and modern. As a result, special attention was paid to the design of the carriages, central stations must have spectacular architecture and a high level of operational features. A marketing project with a particular value was created to convey this image to the society and persuade Saudis about public transport.

European designers also had the chance to consider other typical aspects of the culture of this part of the world. It is not taken for granted at all in Islamic Riyadh that women can find themselves alone with unknown men. They are often only allowed to travel if accompanied by their husband or a male relative. So there was a long discussion during the design process on whether there should be separate sectors for men, women and/or families at the stops, on the buses and in the trains. Surprisingly, the decision was NOT to set up any separation. So local public transport could open the door culturally to a situation that is already the unofficial reality for more and more women. Although the law will allow women to obtain a driving license in 2018, a more extensive, safer public transport system would give more women greater freedom.

So the work is well underway. There is still much to do in the next two years due to the Arab will to succeed and their great financial power.

The bus and underground services should both go into operation in 2019 and is currently the world’s largest public transport system, with an underground network of 176 km and a bus network of 1,200 km.

Master of Engineer Christoph von Nell is the authorized signatory and head of department “Traffic Consulting” at Spiekermann GmbH Consulting Engineers in Düsseldorf, Germany. The graduated engineer with additional Master in Business Administration and Engineering offers more than two decades of experience in the conceptual planning of passenger and freight traffic as well as of the transport industry. So far, on international level he supported customers in the Netherlands, Bulgaria, Israel, Japan, Croatia, Luxemburg, Mexico, Saudi Arabia, Iraq and Czech Republic.