3D image of an infrastructure in a virtual environmental context generated without the aid of real pictures. By Net Engineering

The potential of technologies applied to engineering creation

There is more and more talk in the media, the entertainment sector, medicine, art, architecture and engineering of augmented reality, immersive 3D, real-time rendering and VR viewers. These terms are often used without knowing their precise meaning because of the complexity of these technologies which, despite roots dating to the beginning of the last century, now embrace many fields of application with different functions. 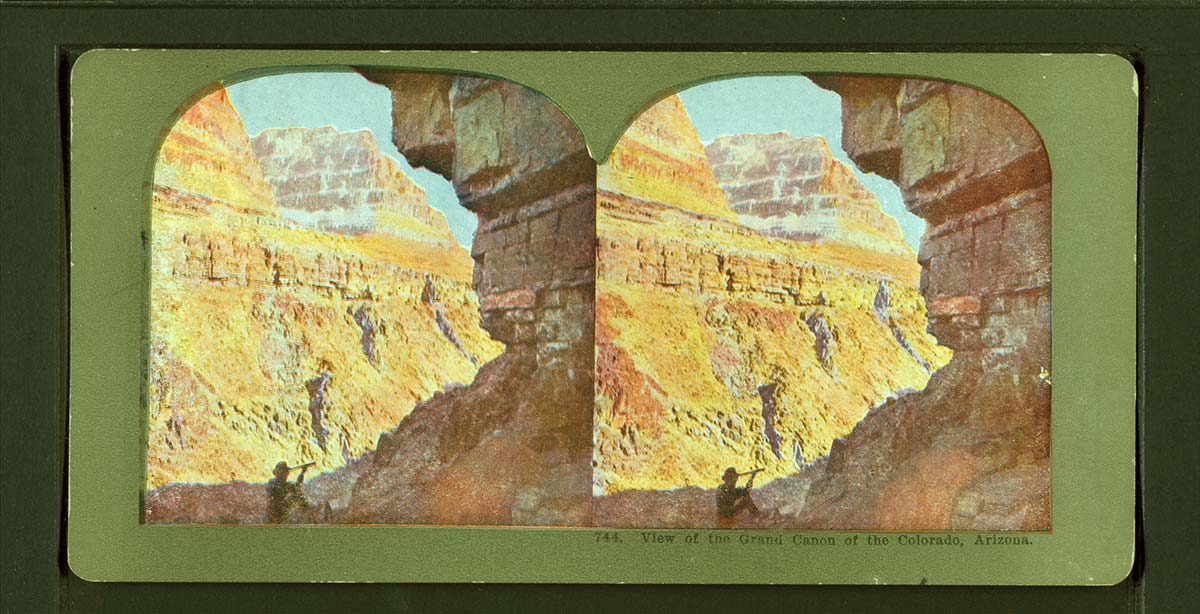 A journey lasting 100 years
Although the first stereoscopic images date to the first half of the 19th century, the first immersive 3D video experience, aimed at the sensory involvement of man, came with the arrival of 3D cinema in the 1920s. Images containing 2 superimposed takes of the same scene, with points of view corresponding to the left and right eye, were projected in the cinema. This technology, called anaglyph 3D, was possible using glasses with special filters that enabled the brain to recompose the scene three-dimensionally. 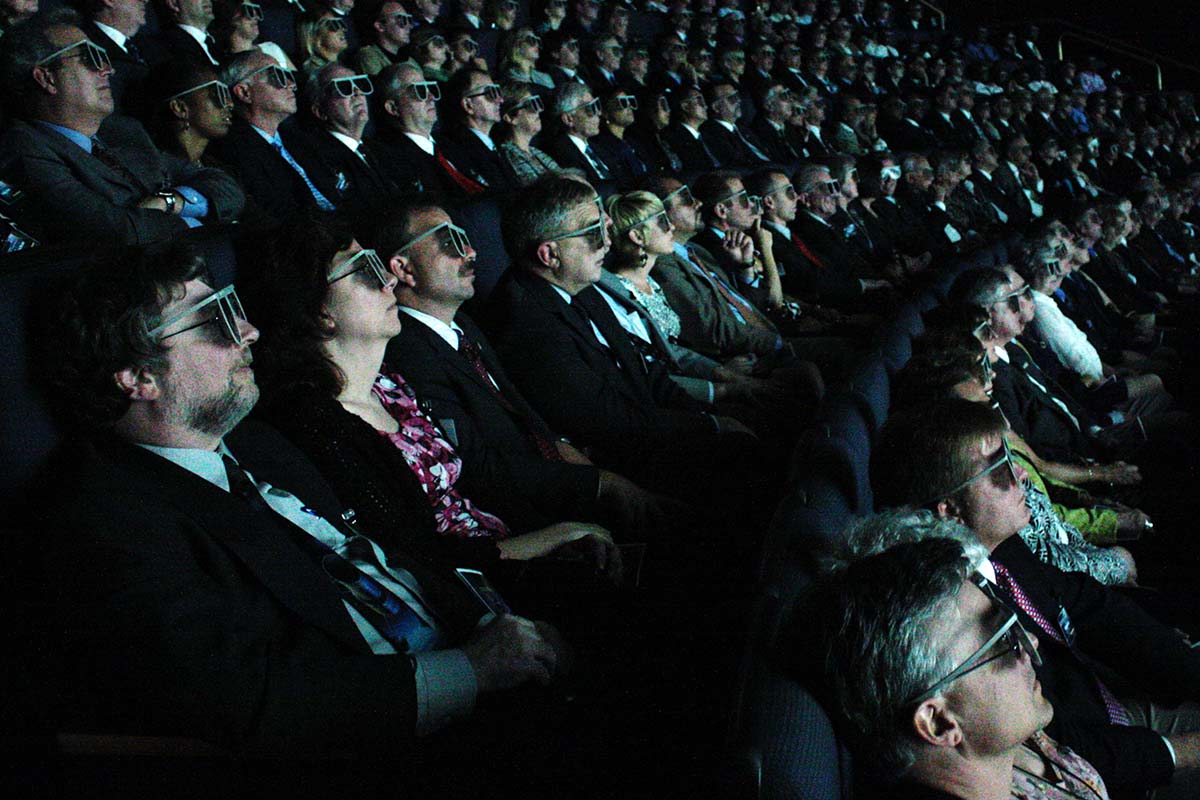 “Reality exists in the human mind, and nowhere else” – George Orwell
In the end, it wasn’t so difficult to deceive the human mind and technology has taken giant steps since those old cardboard glasses with red and blue lenses. In 1957, Russel Kirsch, a computer engineer, digitalised on a computer what ‘Life’ magazine defined as one of the 100 photographs that changed the world, opening the way to the first digital images. This was the start of Computer Graphics. In 1970, the first 3D animation of the movement of a hand was created. In films, the director George Lucas set up the first digital and sound special effects company with the release of the film Star Wars in 1977. A few years later, the first realistic 3D scenes were created and the sound experience became ‘immersive’ with Dolby Surround. In the same period, Jaron Lanier founded the first company able to produce glasses and gloves for augmented reality making the verbal expression ‘virtual reality’ popular.
The need to project in 3D has led to the development of many three-dimensional graphics programs on PCs since the early 1990s by those who are, today, the leading producers in the world of BIM software. The constant increase in the calculation power of graphics processors also allowed the creation of games consoles, like the first Sony Playstation in 1994, able to recreate 3D scenes in real time.

The development to date of hardware and software able to recreate increasingly realistic three-dimensional models in real time has been mainly due to the florid games consoles market. In 1998, Epic Games created a real-time 3D rendering engine called ‘Unreal Engine’. With a dose of realism revolutionary for the time, it was able to operate its new videogame creating a complete immersive experience for the user through the graphic details, sound quality and the player’s point of view which allowed the scene to be viewed with the eyes of the central character. The distribution of this software to third parties made a notable contribution to the technologies we use today and extended the use of this type of product to other fields of application. Although coming from very different fields, we can say that Star Wars or the Playstation made a significant contribution to the supply of useful, revolutionary tools for the design world.

The continual technological research by Epic Games, and also Unity Technologies (the software house which produces Unity, a tool for the manufacture of videogames) and others, contributed to ensuring that the leading design program companies, like Autodesk, All Plan, Abvent Twinmotion or Adecca Software, included or considerably improved the ability to generate three-dimensional scenes in real time in their BIM software. The potential users of this software, initially the companies producing videogames and the advertising and film industries, have now become large architecture and engineering firms, also due to the degree of realism achieved by these platforms and the technological development of the hardware.

The increase in the demand for 3D visualisation in real time outside the ‘games’ world led producers of games software to create development teams specifically for other contexts, including design, enabling greater integration with the Architectural Visualization (ArchViz) sector. For example, special tools which allow dialogues with BIM design software, like Revit, 3D Studio Max, Maja and the leading rendering engines, are being developed. Products like Unreal Engine, Unity, Luminon and others are now ready to enter the production ‘workflow’ of engineering and architecture with the software of the big design players. 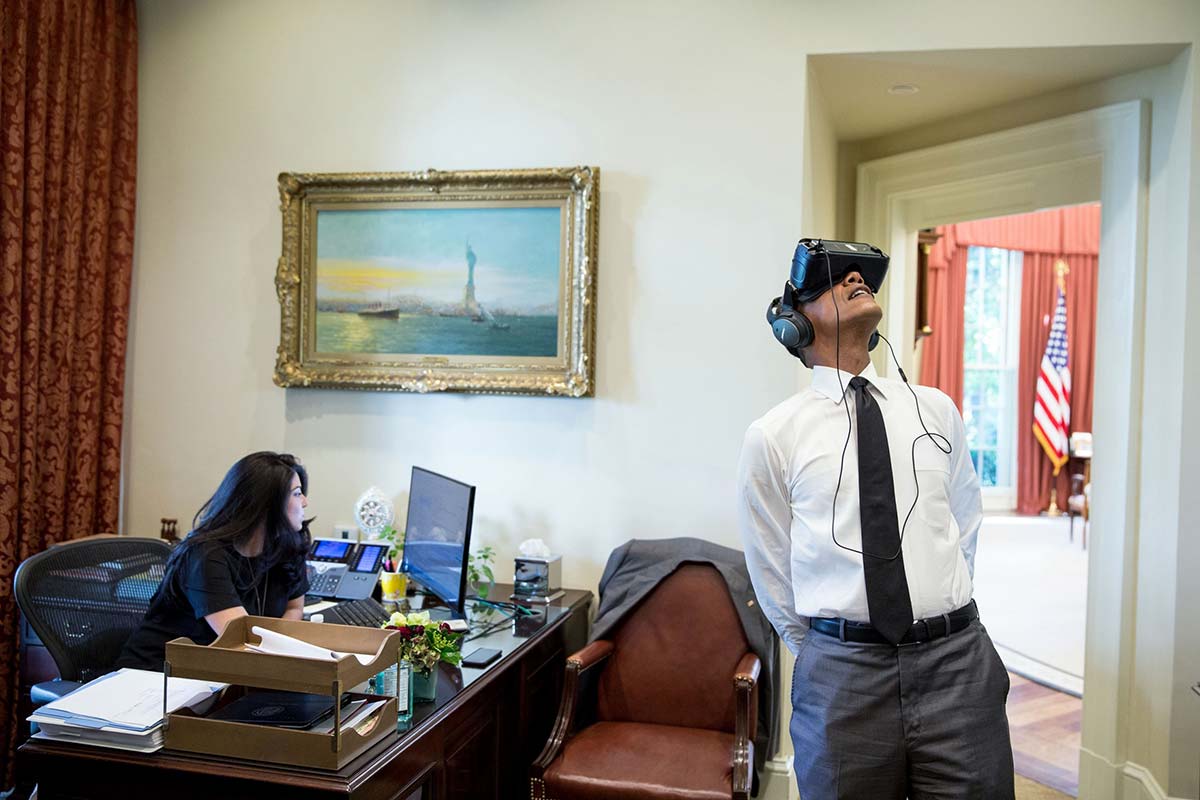 President Barack Obama using a 3D viewer outside the Oval Office on 24 August 2016. On the left, his personal assistant Ferial Govashiri is sitting at her desk. Official White House. Photo: Pete Souza

The current situation
Today, virtual and augmented reality are available to all and have become such a part of the consumer world that 3D viewers for PCs like Oculus Rift of Facebook and Vive of HTC challenge each other through price cuts, and those for smartphones are shown off in all electronics warehouses. The new visualisation systems find space in many fields of application: 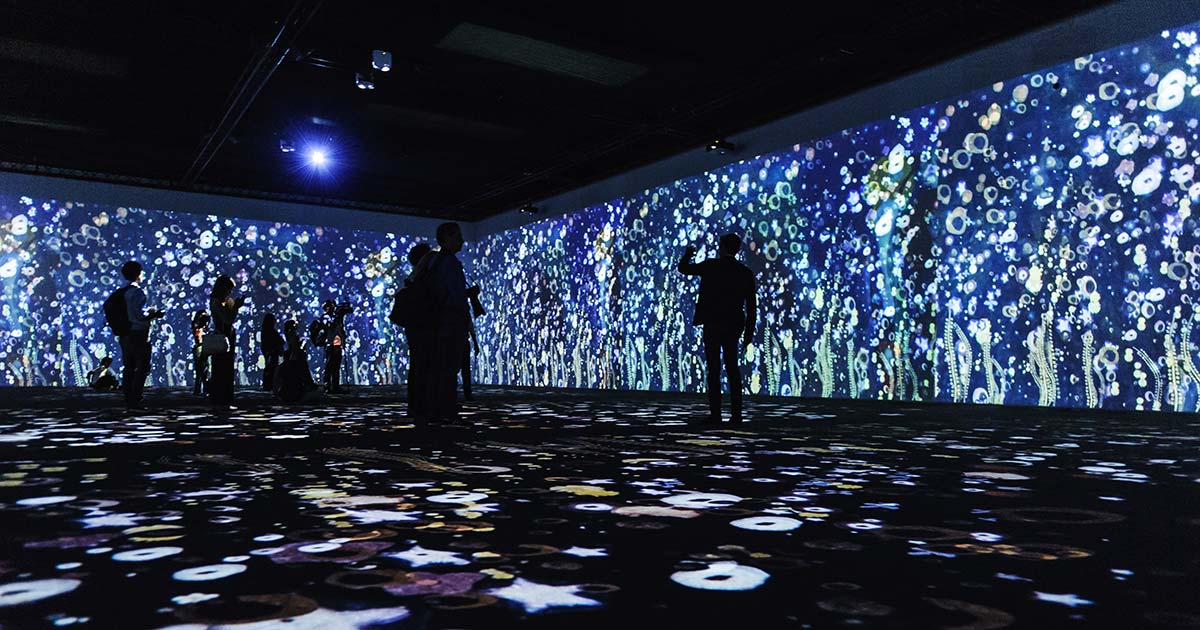 The use of specific devices like the 3D viewers offer the most varied creative possibilities. All-round, 360°, static scenes can be created where the user is in one point and can look in any direction but 3D animations can also be created where the user is immersed in the scene without being able to manipulate it or move around in it. Parts of 3D scenes can be merged with real video takes or immersive interactive scenes created where the user can turn the lights on or off, change the materials and colours of the articles, move them and manipulate the virtual space surrounding him, for example by interacting through the Menu. Now, people can also be filmed live on a ‘green screen’ or a ‘blue screen’ (completely green or blue backgrounds) and included in 3D scenes, and renderings of films that would have taken hours and hours of processing in the recent past can be generated in just a few minutes.

Today, it’s not clear whether it’s a fashion or a consolidation of new mass technologies but, for the architecture and engineering sectors, we have a design presentation tool of great potential. Just think of the importance these technologies have, for example, in public engagement and the opportunity to show future large public spaces like stations, railways, undergrounds, stadiums, concert halls and airports but also bridges and stretches of road, thus involving stakeholders from the first stages of planning. Showing the development of projects in an immersive way through 3D computer graphics, discussing them with the client, amending some aspects in real time and enabling the immediate three-dimensional visualisation make the client an integral part of the creative process.

Investment and experimentation arose from and grew in the areas of business linked to entertainment but it is due to them that we can currently develop shared projects to ensure that the flow of information between the designer and the client is more available and immediate.

Vincenzo Candido is a Visual Designer and has worked in visual communication for more than 15 years. His research and work in the computer graphic world, both 2D and 3D, aimed at the infrastructure engineering sector has a creative approach influenced by his interest in photography, new technologies, design, music and all the visual arts. He applies the visual communication techniques typical of ‘desktop publishing’ in the preparation of infrastructure engineering documentation flanking technicians and engineers to present topics that are often complex in an intuitive and visually clear way.