The Social Network as a key for projects governance

Stakeholder engagement is a key mechanism to ensure that a new large engineering project is meets and satisfies the needs of the people affected by the project; to do this, there must be a meaningful and inclusive consultation process so that the needs and expectations of stakeholders can be indicated and the project as far as possible adapted to them.

As stakeholders of large engineering projects belong to diverse social groups, the Social Network Analysis technique can be of significant help in this process. In this paper, we briefly describe Social Network Analysis, explain what can be done with it in complex corporate organisations and extend the results to large engineering project environments.

From Social Network Analysis to Organisational Network Analysis
The use of images to show the pattern of social networks started in the 1930s. Graphs made of nodes, representing individuals, and ties, representing relationships between individuals, the so-called ‘sociograms’, have been considered useful by sociologists since then as they indicate and explore sociometric facts, in particular the existence of groups and subgroups in the social network analysed.

The Social Network Analysis technique has been applied to corporate environments for decades with the aim of steering change management processes. When applied to a corporate environment, the technique is called Organisational Network Analysis (ONA). This arose from the consideration that classic (linear) organisation charts do not effectively describe the real social network of an organisation1. The informal network, which traditional management has historically considered an annoying problem and an indicator of undisciplined attitude of workers, is actually represents huge potential for the organisation it is applied to. If explained, ONA can provide information on how to improve performance in the organisation2. ONA represents the complete set of real relationships between the players in an organisation (who is in touch with whom) and the specific features of each player (age, sex, etc.) and type of relationship (intensity – for example, frequent telephone calls are an indicator of a more intense contact than mails or messages). 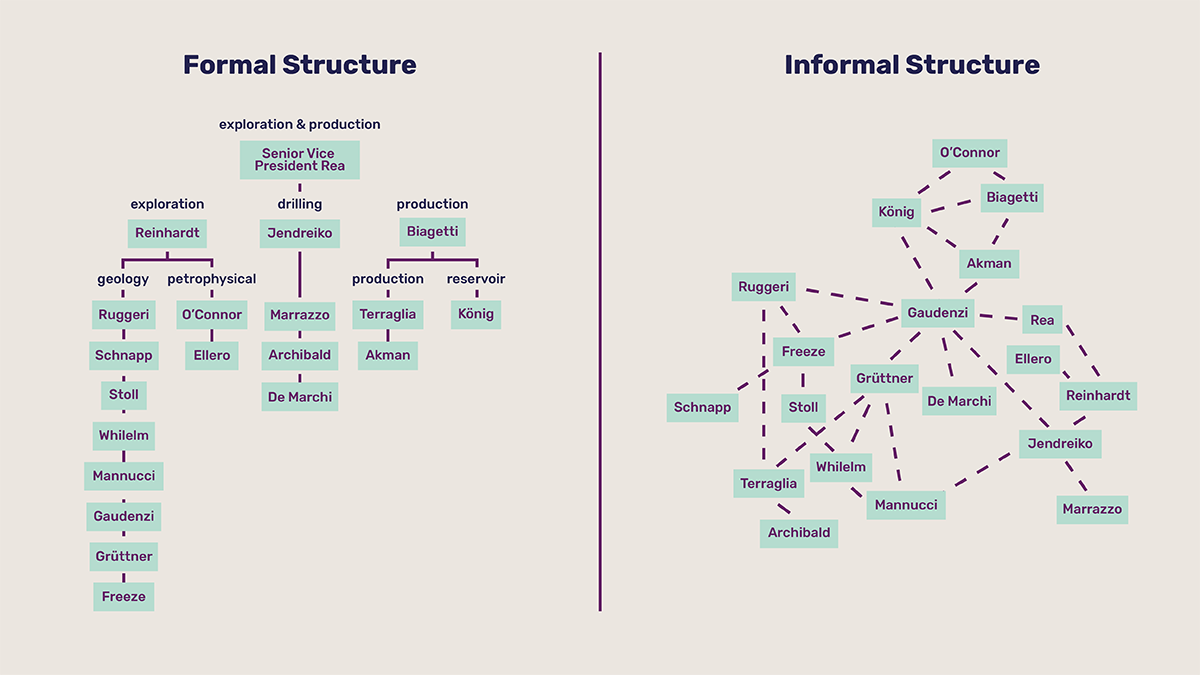 Interpretation of results, further action and advantages expected in a project environment
When applied at project level, the final aim of Network Analysis is to take action to optimise the network between stakeholders.

The most important evaluation is to indicate what connections give added value to the project and what are ground noise, making the fulfilment of the project more difficult. The most relevant connections are those that help decision making in complex situations. Some considerations can be made about potential connections, not yet in being, that could improve the overall performance of the project. After this, some team-building activities can be planned to create these new added value connections.

Looking at the map (sociogram), we should expect some key figures to be hubs for the project, for example the Project Manager should be central and connected to core team members, the Project Sponsor should be well connected to the Project Manager and the key decision-makers, and so on. Sometimes, a person who could be expected to be a hub is not and so is passed over in the sociogram and the expected connections are linked to someone nearby (for example, the Project Sponsor is directly operational in the project and the project manager is passed over by team members who go directly to the Project Sponsor for decisions). In such cases, decisions must be taken to reinstate an optimal situation. Options may include performing team-building activities between certain members, stressing the networking of the person who is not a hub, preventing the undesired hub person (in the example above, the Project Sponsor) from having contacts with the rest of the group (not replying to phone calls or attempts at contact until the team has adapted to using the designated decision-maker), or replace the people responsible for the inappropriate situation.

Action must be taken to accelerate flows of information across the network, detecting and correcting information or decision bottlenecks, and find areas in the network where an increased knowledge flow would have a good impact. Underused resources are usually found in those peripheral to the network with few connections. Subgroups working separately from others like a ‘silo’ must be encouraged to increase networking with the other units. The effectiveness of change can be assessed by the time taken for information to spread through the project or a decision to be taken, for example time taken for an email to receive an answer from specific project players3. It can be very useful to compare the results of the current analysis with others made in previous projects to check whether the networks show relevant differences in their shape.

For the portfolio management of projects, a score could be given to projects in the portfolio indicating the intrinsic complexity (for example, the number and intensity of connections in the project network) or external complexity (the number and intensity of connections with other projects)4 to indicate critical projects, not only in terms of total costs as usually done, but also in complexity. It is interesting to assess the complexity of projects with similar scope and size, managed by a single large company or several companies in a joint venture or consortium. This kind of approach to portfolio management ensures that the most difficult projects are indicated and corrective action taken in advance at the procurement stage in large engineering projects5.

To aid acceptance of projects by the communities involved, design and implementation must be made in a socially sustainable way which demonstrates respect for the people affected by the project. Special efforts must be made to include and explain topics related to safety, sustainability, economic and social inclusion, gender and social fairness, etc. in projects to stakeholders. In this kind of context, information management becomes crucial to advise all stakeholders correctly, avoiding the spread of fake news through the social network. After the analysis in the first part of this paper, the contribution of SNA to driving the stakeholder engagement process can easily be seen.

The most significant difference between SNA applied at corporate and project levels is that, for the stakeholder engagement process of a large engineering project, there is a wide variety of stakeholders entitled to influence the project.

In addition, unlike a process in a corporate environment, the person in charge of the process must absolutely avoid driving the discussion towards a desired goal but, on the contrary, he/she must pay great attention to and take into account all the positions, all proposals must be included and the final solution must be given after a public discussion analysing all the positions initially found. In a corporate environment typically the aimed solution is generally given by the CEO or the Project Sponsor, often according to some Customer’s, explicit or hidden, request.

The final advantage of applying SNA to a stakeholder engagement process is that it can help to indicate groups of stakeholders not really included from the start of the decision-making process who, as a result, are an enormous risk if these emerge at an advanced stage in the project, making requests for late changes which, as such, have a significant impact in terms of cost and time. In addition, SNA can help in optimising meetings with all communities and subgroups only involved in some parts of the project. At the end of the process, SNA helps the people involved to agree on a shared solution and make the whole process faster and more effective.