The Danube cycleway near Tulln (Austria). The cycle path on the northern bank of the river starts on the other side of the bridge.

Cycleways for the redevelopment of the country

Italy could certainly be the promised land of the touring cyclist. The climate, history, landscape and good food can accompany the traveller in an extremely varied and enthralling experience, and the many foreigners who have ventured along Italian roads know this. Fascinated by the places, pampered by the climate, attracted by the food yet surprised by how little there is and how much there is still to be done to welcome this growing sector of tourism. In effect, to date, there has been no plan for the promotion of cycle tourism in Italy although there are plenty of good examples.

The first to realise there was a need to find, create and promote cycle paths were the regional parks. The creation of a network of paths in protected areas was seen as the most effective way of convincing citizens of the need to protect natural areas. From this point of view, the parks have promoted the ‘rediscovery of the wonders’ close to home and, through the cycle paths, encouraged their use by recreating a sense of belonging and identity of an individual’s area which had been lost in the years of significant industrialisation. Subsequently, the provinces and mountain communities promoted the creation of cycle tourism itineraries recuperating an existing secondary road network, rejoining sections and making intersections with the road network safe.

In this context, some regions, such as Trento, have also made it a strong tourist promotion element for off-peak tourism and the delocalisation of the tourist offer. The cycle paths created along the Trento valleys achieve the dual aim of taking tourists into areas that are off the beaten track, like the valley bottoms and agricultural areas, and modifying seasonal presence which, until a few years ago, was mainly concentrated in the winter months and high summer.

Designing cycle paths for cycle tourism means realising that our land is full of circuits, infrastructure and minor roads that are either partly used or completely abandoned and that, once valorised, are the ideal way to rediscover the country and landscape. River banks, local roads, unused roads, and abandoned railways become precious filaments for weaving cycle networks of great environmental value.

Cycle paths as a redevelopment opportunity – the pictures show part of the Lura river before and after the creation of the cycleway.

In this context, work must concentrate on making good the surfaces, making exposed sections safe and also the creation of clear, continuous signs that make orientation easy and reading local historical and environmental signs interesting. When the choice of an itinerary works, there is also the problem of the size of the structure. The reference law in Italy is not only the Highway Code but also Law 557/99 which establishes minimum size in relation to the type. Two-way cycle paths must be at least 2.50 m wide. As actually applied, this minimum standard has almost always become a maximum limit and few projects have gone beyond it. In fact, all types of bicycles and all users (touring cyclists, families with children, bikes with trolleys, and the differently able with their means of transport, etc.) must be able to use a cycleway for it to be effective. Therefore, it is clear that the cycle path must allow slow cyclists in both directions to be overtaken, even if only alternately. This simple need takes the minimum operating width to at least 3.50-4.00 m, which should be increased where there is also a consistent pedestrian flow. 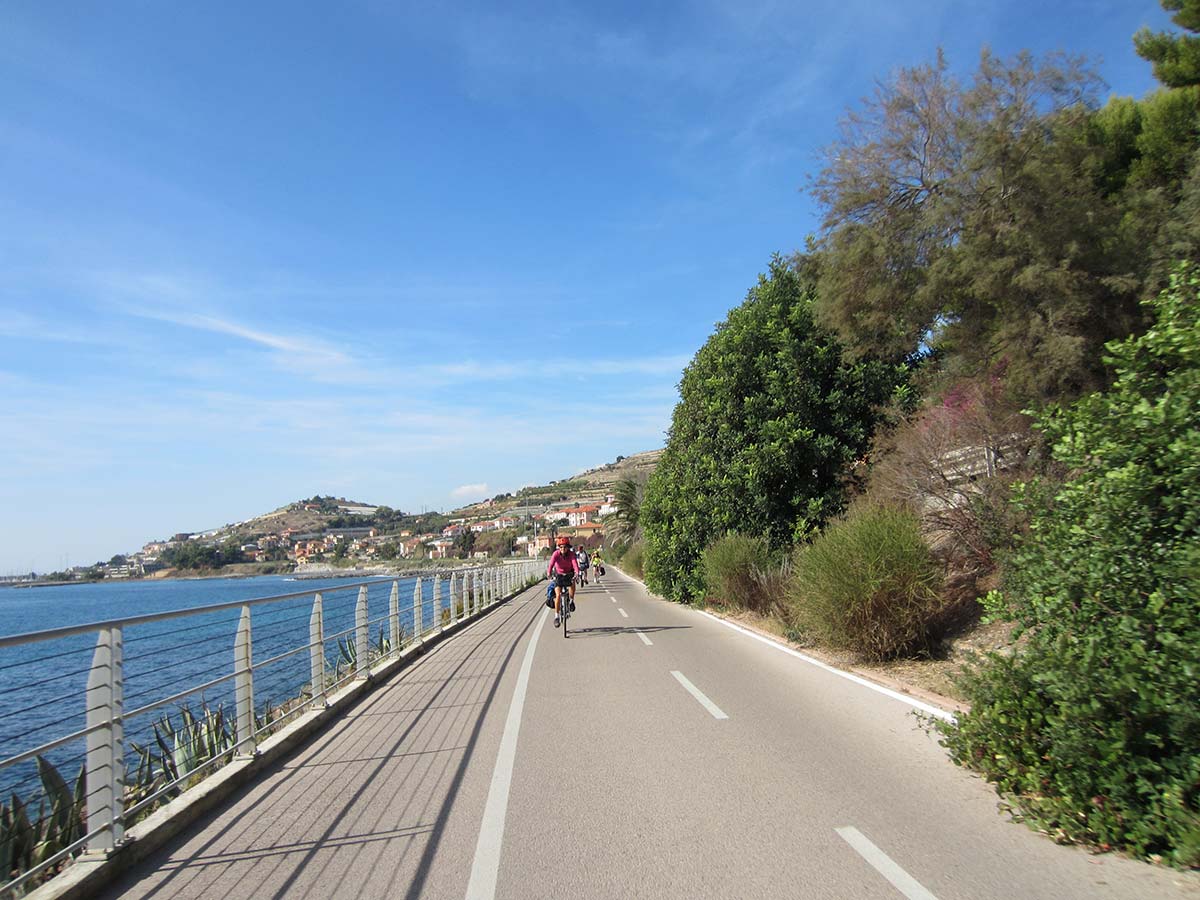 Fortunately, some recent Italian creations are moving in this direction. The Fiori Cycleway from San Lorenzo al Mare to Ospedaletti, which goes through Sanremo, has a cycle lane of about 3 metres plus a pedestrian space of 1.50 m.
The great success of creations like these have highlighted two aspects – the immediate economic return of the investment in terms of the tourist industry and saturation because of excessive use in the summer. Similarly, it has also made it clear that good quality operations (and the relative consistent costs of creation) respond to the demands of the contemporary touring cyclist. These creations and their success, with the ongoing cultural and environmental changes, have also made it the right time to take an important step forwards.

To date, we have always considered the great foreign examples, like the now legendary Danube or Drava cycleways, or the more recent Paris-London one, as fantastic but unachievable examples. In actual fact, the vision of cycleways is now spreading in Italy and being put into effect. The Bicitalia project, developed by the Federazione Italiana Amici della Bicicletta (FIAB – The Italian Bike Users’ Federation), imagines a national network of tourist cycleways of more than 20,000 km winding throughout Italy. For the first time, the government has set out a financing plan for the creation of the ‘National Tourist Cycleways System’ based on this network. Ten cycleways are planned, from Veneto (Venice-Turin along the Po) to the Ciclovia del Sole – Cycleway of the Sun (from the Brenner to Rome, currently financed as far as Florence), and from the Garda circuit to the track of the Pugliese aqueduct, which will bring a financial commitment of Euro 370 million in the next 5 years. This is certainly a historic opportunity to develop new technical professionalisms and recover the gap which has always marked us in comparison with European countries that are more advanced from the cycling point of view. 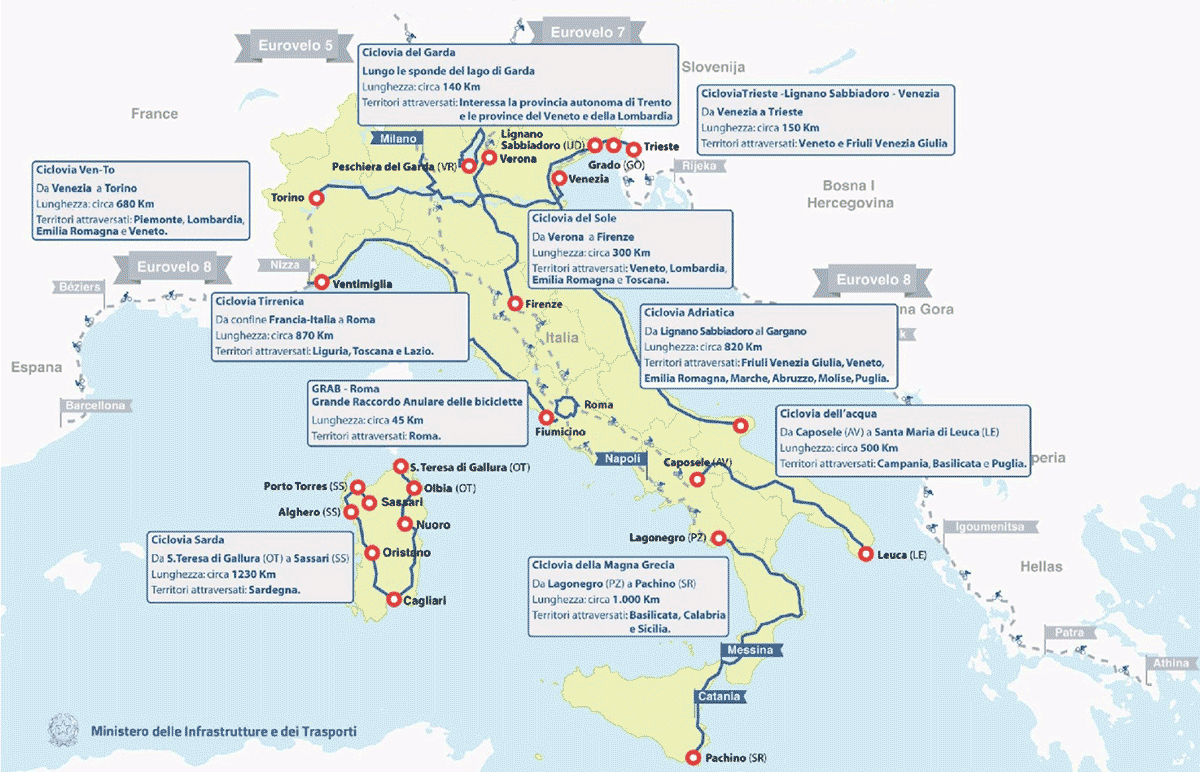 Valerio Montieri is an architect and is lucky enough to have always united his passion for cycling with design. Amongst other things, he followed the cycle connection of the Milanese canals in the ‘Camminando sull’acqua’ (Walking on Water) project, the establishment of the special planning control along the Tuscan section of the Via Francigena and the compensation work for Florence airport.