Aerial view of the Technogym HQ at Cesena, along the A14 Motorway. Architectural project by ‘Antonio Citterio Patricia Viel’.

In the Italian and European institutional discussion of recent years, the concept of corridor has mainly been intended on a macro scale, as a transnational and transcontinental route, functional for the circulation of large flows of people and goods in the European market and the integration of local and national economies into extended value chains. This prospect has been translated into policies concentrated on infrastructure for the fast connection of large metropolitan centres, without much attention to the areas crossed which, as happened in Val di Susa, have often felt ‘supplanted’ by large works for which they couldn’t perceive local benefits.

However, a definition of corridor on a more limited, metropolitan or regional, scale can be found in the literature on urban studies which is not just concentrated on the infrastructure and transport aspects but looks at the corridor as an important device for urban growth and local development, intending it as a route where easy accessibility stimulates the dynamic nature of society and the economy.

Starting from this perspective, the PRIN ‘Post-metropolitan Areas’ research project, created by a network of nine Italian universities, set up a study of corridors as urban systems, highlighting dynamics that contribute to explaining the ongoing logics of growth and connection of large and small towns in some of the most vital regions of the country. The analysis highlighted the existence of corridors in some areas of the North and Centre where the high level of interchange of different types of flows, organised in both the short-term (flows of commuters, city users, goods and knowledge) and medium-long term (demographic trends, supply chain and business services networks), generates systemic effects, enabling even small and medium-sized towns to take an active part in the urbanisation and economic development processes, in co-operation rather than competition with large metropolitan centres like Milan and Bologna.

A good example of a corridor can be seen looking at the towns aligned by Via Emilia, from Piacenza to the Adriatic coast. Here, urban growth, intended as both an increase in the residents and greater land consumption, is not concentrated in the largest city, Bologna, but is mainly (and increasingly in recent decades) in the small-medium and medium-sized centres, as long as well served by the motorways and railway lines. In the same areas, medium-sized towns and smaller centres are not only generators of commuting but similarly attractors of a relevant share of the commuter flows, also from medium-long distances, something that has recently been accentuated by the new high speed railway connection. Their economies and work systems are not limited to the provincial area, as happens for almost all the centres of similar size which are not part of metropolitan or corridor systems but are organised on a much wider scale, including Bologna, and also Milan for many functions.

This multi-centre regional system cannot be interpreted following the centre-suburb dichotomy, which sees the concentration of knowledge and value generators in the largest cities. The significant interchange of flows of people, information and goods favours an often spontaneous specialisation process of the urban offers of services and collective goods for townspeople and companies. Piacenza has a high concentration of businesses in the logistics area, Reggio Emilia in accounting and management consultancy, Modena in design and leisure activities, Bologna in all advanced services, and the areas connected to ICT and creativity (advertising, design and media) in particular, Parma in the cultural sector, and Rimini in trade fairs. The outcome is a mosaic where local offers tend to integrate, with positive effects for the overall system. Not only urban but also economic growth is concentrated along Via Emilia and the other main regional corridors and, within them, supply chains, knowledge systems and employment markets are defined, generating most of the innovative ability and export capacity of Italian companies.

However, these regional corridors do not always coincide with those of the TEN-T system. In some cases, the TEN-T infrastructure route is not the one used for organisation of the main dynamics of urbanisation (between Turin and Milan, Florence and Rome) while, in other contexts, especially the regions of southern Italy, the growth of an integrated social-economic system does not correspond with the development of the road infrastructure. There, the corridor is merely a fast connection route between large urban centres and does not generate obvious effects on the economic performance and social dynamics of the areas crossed.

The differences in the national scenario do not seem to depend just on the amount of infrastructure for mobility nor the existence of dense flows of people, information and goods (factors partly linked to wealth and well-being). What is relevant is the role covered by smaller towns in the system – the regional corridors emerge in particular along the line of the A4 motorway between Milan, Venice and Trieste, along Via Emilia, in the central area of Tuscany, regions where there has been a dense urban texture since the Mediaeval period and the towns are historically important economic players. In these regions, the corridors take on the aspect of ‘pearl necklaces’, multi-centre, varied assemblies where not only the large towns but also the smaller centres contribute to ensuring the vivacity of the system and its elasticity with respect to the changes induced by the changes in the economy.

Regional corridors are difficult to define according to administrative criteria as they are changeable grid systems whose shapes do not depend just on the innovations in the infrastructure system but also the pre-existing urban fabric. By their nature, the corridors are open spaces, subject to the influence of different contexts that find it difficult to create stable balances. They have a high level of accessibility still, at least in part, sheltered from part of the costs and external effects that mark the central metropolitan areas (from traffic congestion to the price of land and rents), factors which encourage the localisation of new businesses or new residents.

These dynamic elements contribute to marking the regional corridors as not only economically vivacious areas but also as the theatre of new social conflicts caused by the reformulation of settlement models and use of the ground. A relevant part of the transformation and innovation processes of the post-metropolitan scenario is concentrated in these spaces. Greater understanding of the logics behind them would be decisive in representing the directions and methods with which the urbanisation processes are organised in Italy and a better regulation of them.

However, it is certain that the fulfilment of albeit necessary infrastructure operations on the flows systems is not enough to accompany the development of these systems but questions defined, to date, just for each individual town, starting with planning of the area and its functions, must be considered. 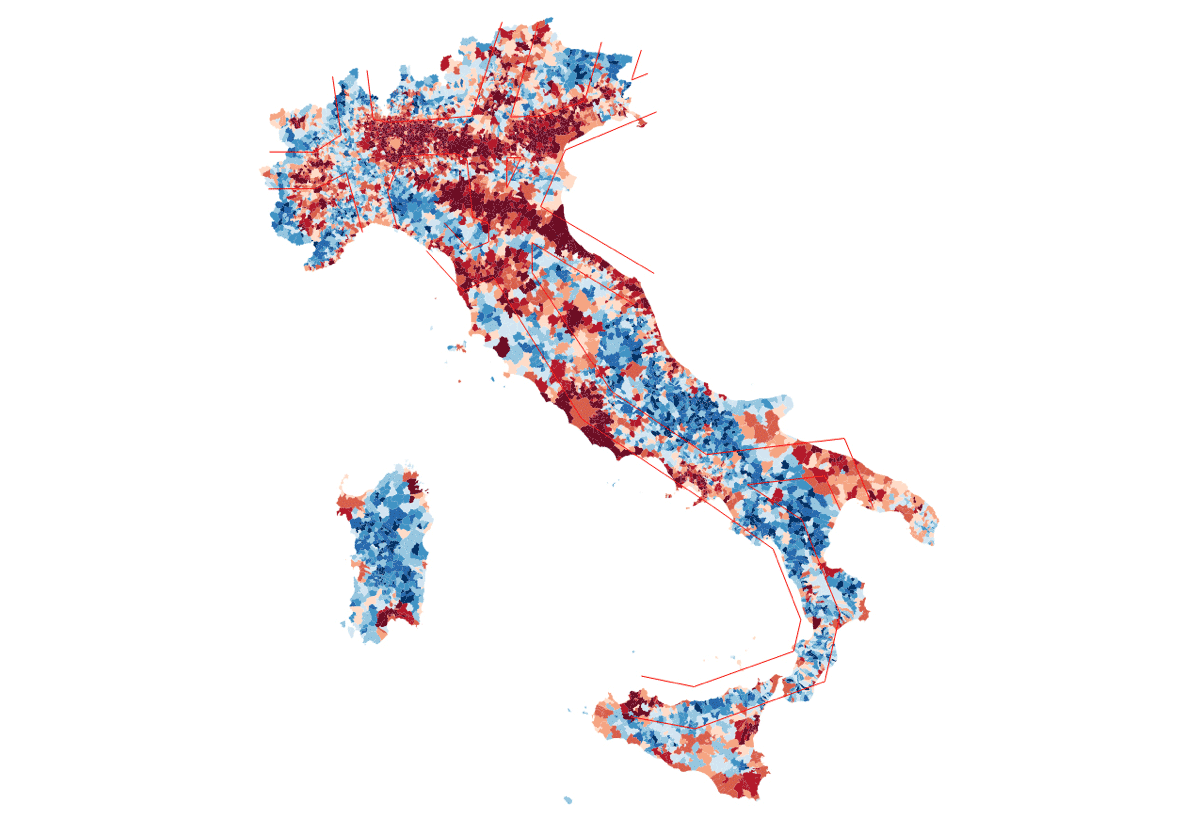 Index of corridor dynamics in Italian municipalities obtained by weighting many indicators relating to settlement processes, and mobility and economic systems. The worst performances are shown in blue, the best in red. The routes of the Core Network Corridors indicated by the European TEN-T programme are shown with red lines on the map. The result clearly shows how only a part of the route of some European corridors is effectively congruent with the areas where there are the highest values of the index. Source: Atlas of Post-Metropolitan Areas – PRIN ‘Post-Metropolitan Areas’ project, 2015.

Co-ordinator of the Master in Local Development of the University of Eastern Piedmont. Recent publications include the essays ‘Località in movimento. Governare i sistemi locali nella società dell’informazione’ (Rosenberg&Sellier, 2017) and ‘Città dei Flussi. I corridoi territoriali in Italia’ (Guerini, 2017).