The effects of the travel experience on mobility choices

Art in the underground

The new underground stations should invite permanence and reflect the soul of Düsseldorf, a cosmopolitan, innovative, demanding and creative city

In 2001, Düsseldorf launched a tender for the design of the underground stations of the Wehrhahn-line, with which the provincial capital of the North Rhine-Westphalia wanted to test an especially innovative design approach as the awarding authority. For the first time, engineers and architects were invited to develop their basic design in close co-operation with a pool of artists so that the various design disciplines co-ordinated with each other to define a common vision of the spaces.

Therefore, both the visual conformation and the technical-construction of the underground stations are not exclusively based on the structural indications of the tunnel designers but also respected artistic and architectural concepts. The artistic component thus lost the idea of decorative embellishment habitually used as a complement to design for the ‘Wehrhahn-line’ project. The targeted symbiosis between architecture and art tested for the Wehrhahn-line showed how the determination of the main aspects specific to the design of a public underground space can be partly set by artists from the earliest stages, successfully obtaining a project that is more attentive to beauty themes and the travel experience.

In the consequential artistic-design process many productive round tables took place during the planning and construction stage, where different decorative proposals and solutions were discussed and agreed on, joined with visit to the artists’ studios and 1/1 scale models. Many of the ideas for the decorative design relating to the texture of the construction elements, such as floors, walls and ceilings, were subjected to investigation and analysis by architects and artists, particularly for the construction features and their quality in terms of ‘entertainment technology’. This type of joint work between the different specialists that the new spaces of the underground should get a ‘skin’ which would allow it to stand up to the stress of a public area (wear, micro-climate, vandalism, etc.). At the same time, an unconventional and aesthetical sophisticated architecture and art should be developed and with that an ‘unconventional’ travel experience with a high aesthetic value. 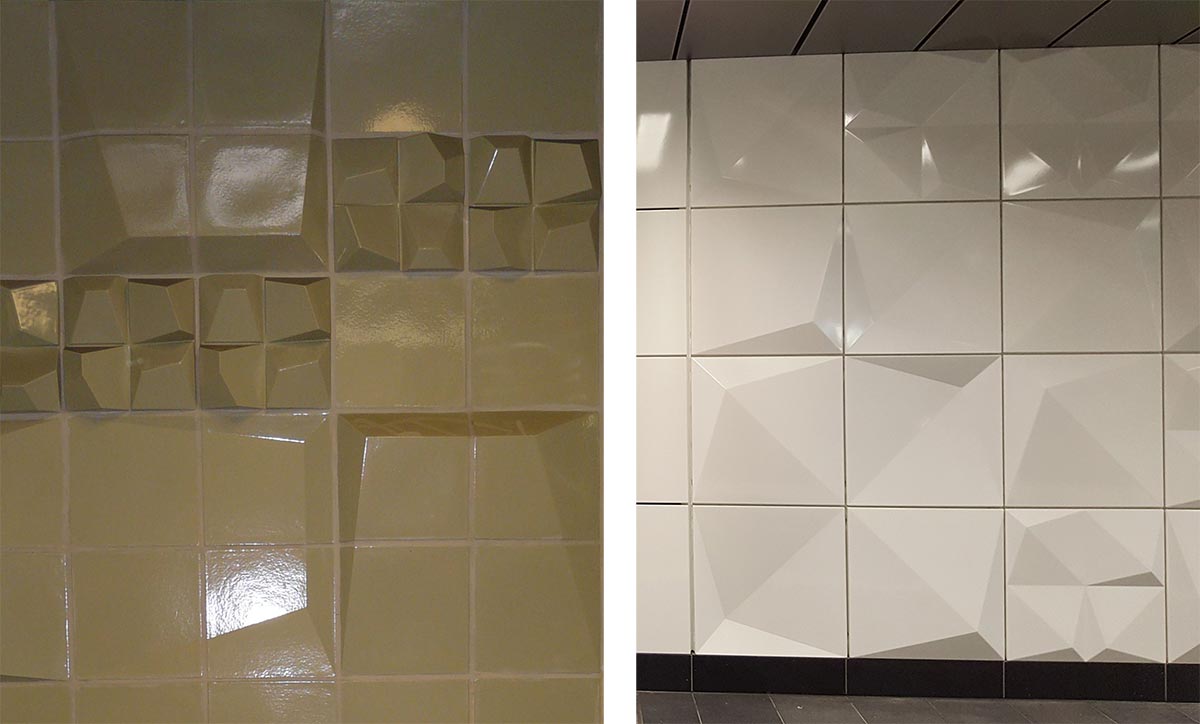 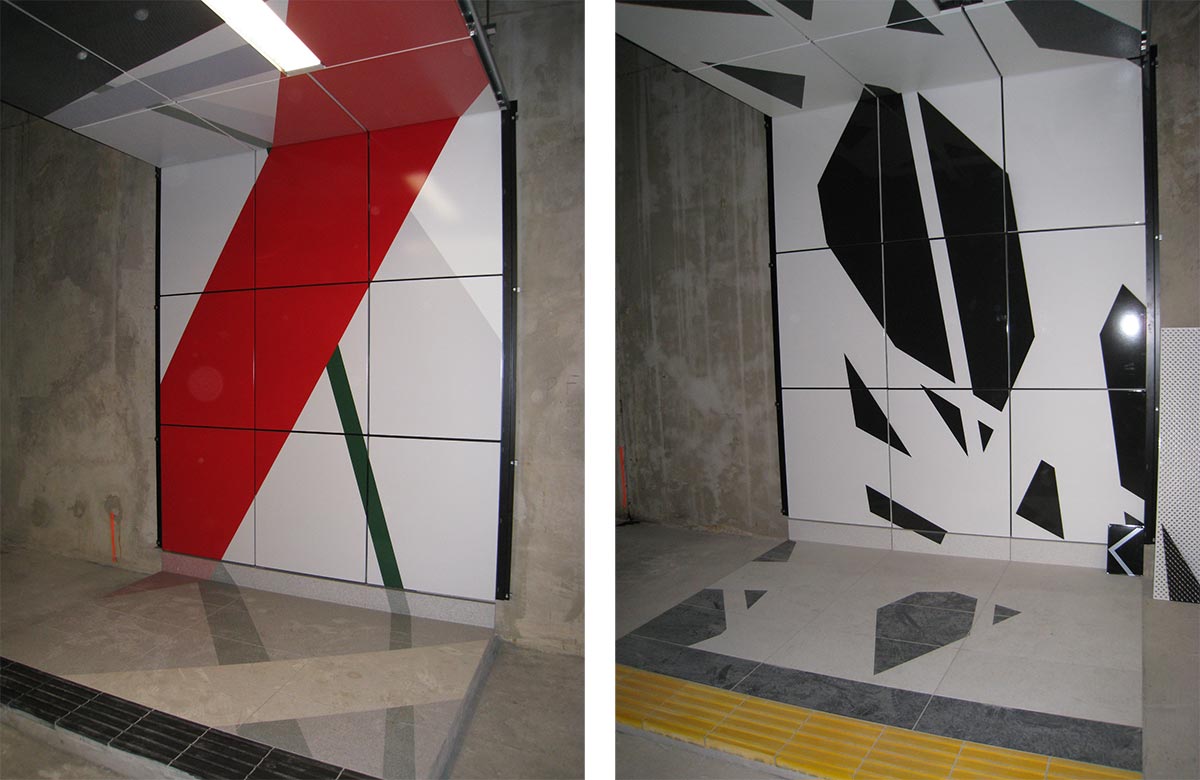 Another interesting aspect of the Wehrhahn-line project is the underground continuum. Instead of imagining the underground line as a series of independent, unrelated stations, the designers created a single spatial flow through a wall covering intended as the continuation of the tunnels in the stations. In this way, the tunnels seems to move through the city like an independent, underground parallel world, which is enlarged in the stations, each of which features the work of a different artist. 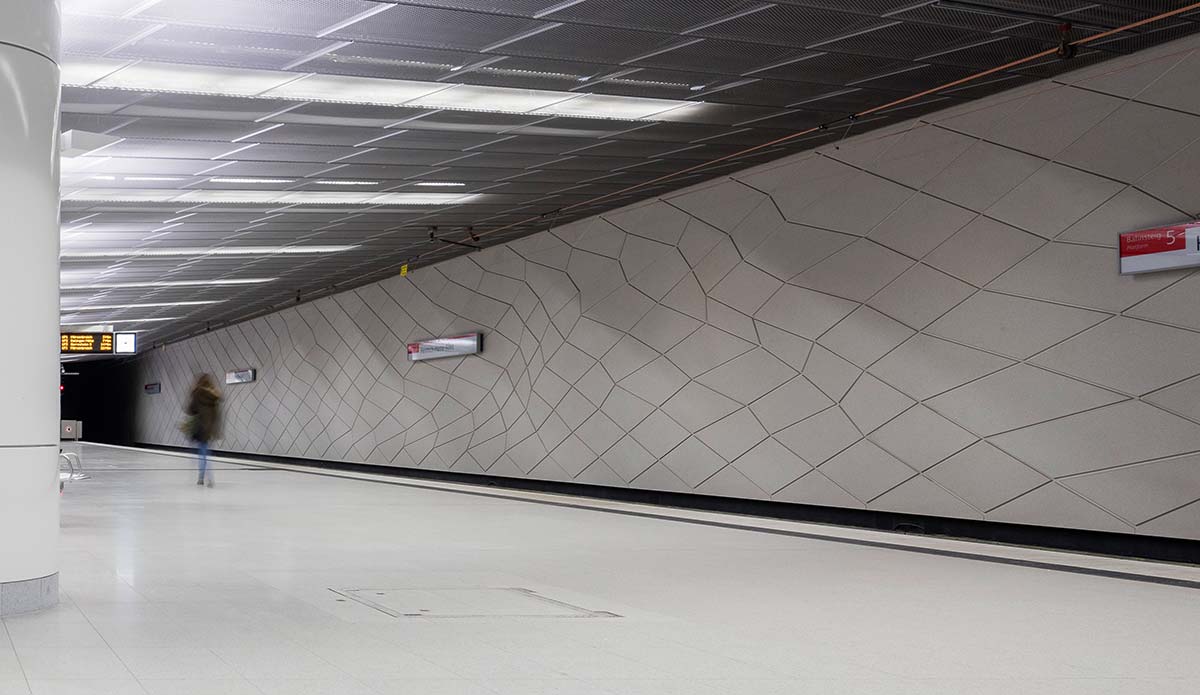 The relief structure, the ‘skin’ coating the walls in the stations of the underground features a texture conceived by an artist, starting from the codification of a mathematical sequence which, transformed into matter, creates a wavy surface consisting of lozenges whose size is irregularly increased or decreased. Once again, the challenge for the designers was to combine the artistic idea and its aesthetic requirements with the static and construction assumptions of a transport infrastructure. For example, some of the special lozenge parts were too small for a secure installation and other static specifications. As a result, engineers, architects and artists enabled together a specific solution: the lozenge wall panels too small were built as part of one adjoining piece of concrete coating panel with a mock gap cut into the concrete.

Gaps connect the stations with the public space on streetlevel and conical slits bring natural light to the stations. These slits and their artistic layout support the paticular identity of every station within the continuum. The natural light generates a brightness of the stations and together with the open space (pillars instead of massive walls) offers an easy orientation, a good overview as well as a high level of social controll for passengers.

The high quality results obtained through the integrated management of the project between engineers, architects and artists were perceived and welcomed very positively by the people of Düsseldorf, who named the Wehrhahn-line the ‘Art Line‘.

Since the new line came into service, the number of passengers on this section has risen considerably. The reasons for this increase should undoubtedly be sought in the reduction of travel times and the high technological quality of the stations but the feedback on the ‘positive’ feelings of beauty and security that users feel as they wait in the stations should not be undervalued. This high level of acceptance and valuation for the Wehrhahn-line can be documented with the fact, that to date, about 18 months after the opening of the line, there still has not been any damage from graffiti or vandalism of the high quality coatings and flooring of the underground stations.

At surface level, the old route of the urban railway line close to and sometimes in the roadway was a regular cause of interference with vehicle traffic and the buses with traffic jam and accidents, with the inevitable increase in travel times. Taking the railway infrastructure underground resulted in an extension of the pedestrian area and certainly generated an improvement in the levels of traffic flow and in the perception of liveability of the city centre and allowing a significant reduction in travel times.

Click on the link below for more information on the Wehrhahn-line project. www.duesseldorf.de/verkehrsmanagement/mit-bus-und-bahn/wegweiser-wehrhahn-linie.html