How does wayfinding design improve the travel experience?

Wayfinding is considered to be an autonomous process, independent from its context. Wayfinding in a forest or a nature reserve has no effect on the landscape or the arrangement of the trees but if we come to speak about trails, things change. Because we create trails ourselves, according to our own interests. Do we want the fastest route from A to B, do we prefer a scenic route or are we interested in the highlights as a panoramic view, rare trees or places where animals gather?
Only when we are in a situation that we can also plan the landscape like a city park, do we have to think about wayfinding as result of flow. We can choose between a ‘natural flow’ like a national park with its different paths or a manipulated itinerary as in Disney World.

This is the same for the design of complex, mostly public, venues like airports, stations, hospitals and museums. Since the start of my career as ‘wayfinding designer’, I have realised that signing is something different from wayfinding. Signing is about putting up signs, wayfinding is about offering the right balance of means of orientation, information and navigation to let users find their way. Putting up signs is often inevitable but we consider signs by default as a necessary evil. On the other hand, as designers, we love designing signs that look good with pretty symbols and nice colours.

But, over the years, we have also learnt that the key of comfortable wayfinding lies in a clear infrastructure. Easy routes, recognisable entrances and understandable organisation of spaces can provide a ‘natural’ wayfinding that is paramount above signs, however beautiful they might look. So our attitude of limiting ourselves to the design and logical organisation of signs switched towards focusing on the ‘flow’ of common users as they cover their individual ’passenger journey’.

Before, we waited until the architects supplied their plans, now we first try to discuss with our clients to investigate their aim and wishes. Then we develop the ideal flow(s) and we formulate all appropriate wayfinding criteria which can be added to the programme of requirements given to the architect.
This change in our method doesn’t always come easily because architects often dislike our entry into their turf. But we believe strongly in the adage of Jock Kinneir (1917-1994) who designed the famous English road signs in 1963, “Good signage cannot cure sick buildings”.

Intuitive airport – One flow – panorama of the levels. The signs are not just designed but flows based on natural wayfinding are created – passengers enter the airport at the highest level and can see the next step they will access as they descend, and also their final objective (the aircraft) – © MIJKSENAAR

Many clients hope that modern mobile and interactive devices like smart phones, car navigation systems etc. will make all traditional, static signs redundant. But the opposite seems true. For Schiphol Airport in Amsterdam, it has been guessed that only 5% of passengers use their smartphones during their stay at the airport. And if they do use them, they seldom use them for navigation (with the provided route maps to a chosen destination like a gate, toilet or shop) but mostly for checking alerts about their flight (boarding time, possible gate change, delays, etc.).
On highways, we don’t see a decrease in signs, despite our car navigation systems.
This is because at an airport one likes to shop, eat and drink something in a relaxed, comfortable way.
Looking at your handheld device all the time is a nuisance (except for millennials, continuously checking their social media accounts!). On the road, there might be diversions, traffic-jams and there may be new roads, not yet updated in all car navigation systems. And of course, these devices can easily fail – low battery, software malfunction, you name it. So all these new developments should be considered only as supportive in many, many ways but make the traditional systems superfluous.

Of course, as wayfinding designers, we are integrating every new digital tool into our wayfinding systems – we even initiated a ‘Mijks R&D’ team – but, on the other hand, we try hard to make architecture fit to allow ‘natural wayfinding’ where light, material, form and space speak for themselves. Generally speaking, we have to anticipate a different social environment where all media – static, dynamic, fixed devices as well as mobiles – work together smoothly for both elderly and young people.

As a result of a seamless mix between ‘natural wayfinding’, effective signage and smart guiding systems, travelling will be evaluated as a smooth experience where you can receive messages and hints from friends and also travel agencies, cities, cultural institutions, etc. through various platforms, including social media, during the itinerary.

Christine de Lille, assistant professor at Delft University at the Department of Product Innovation Management, foresees immense changes in the process of travelling, due to many developments in security and border control processes such as use of biometric features. It is our aim that wayfinding should merge seamlessly into this experience, almost unnoticed by the common passenger. 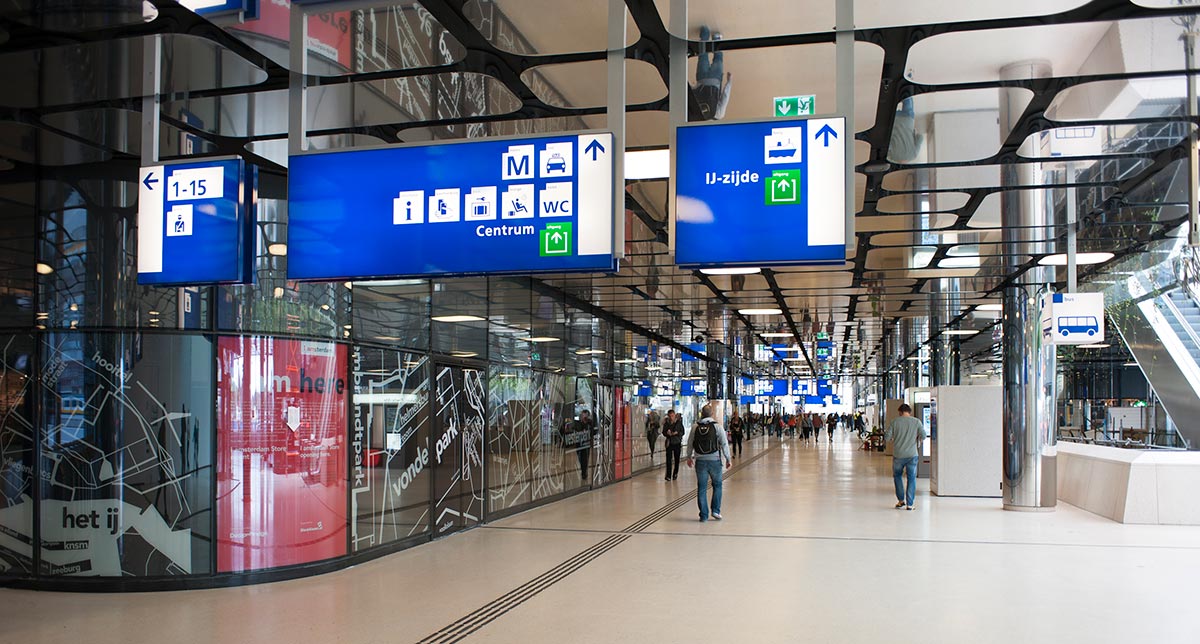 Dutch railways – Amsterdam Central Station. The standards of the UIC (international organisation of the railway sector) were respected for the design of the wayfinding for the Dutch railways but a Dutch flavour was added, also recognisable by foreign passengers – © MIJKSENAAR

Airports, stations and museums are places designed for people with a different social and cultural background. But most people who travel leave their cultural background at home. They are aware that they will encounter differences and prepare themselves, although there will always be local and national differences. Luggage is called baggage in the US, red suggests ‘exit’ in the US (and in aeroplanes) but, in the rest of the world, it’s green. The Red Cross symbol for first-aid and emergency is replaced by a white cross on a green square. First floor means the first floor in Europe but ground floor in the US. But, in my opinion, a ‘lingua franca’ in the wayfinding vocabulary is developing that, in the end, will cover the whole world. National legislations and regulations will follow, though slowly.

Notwithstanding the application, designers at Mijksenaar always follow our own key quality standards. Among them is the set of 5 C’s – Comprehensiveness, Clarity, Consistency, Conspicuous and Catchy (attractive). At a higher, maybe more abstract, level of our final goal is the reduction of ’stress’ for which we are using our own models, based on cognitive psychology.

Information principles regarding orientation, information and navigation – wayfinding principles – are all-embracing and should be applied to both city signing and online platforms. They are equally relevant for signs, websites, user instructions, reference guides, etc., following the same set of criteria of usability. Our approach for airports in Amsterdam or New York was no different than for the Ikea stores worldwide or the Hermitage Museum in St. Petersburg. The differences between all of them might be a unique appearance in the choice of colours, symbols, terminology and materials. 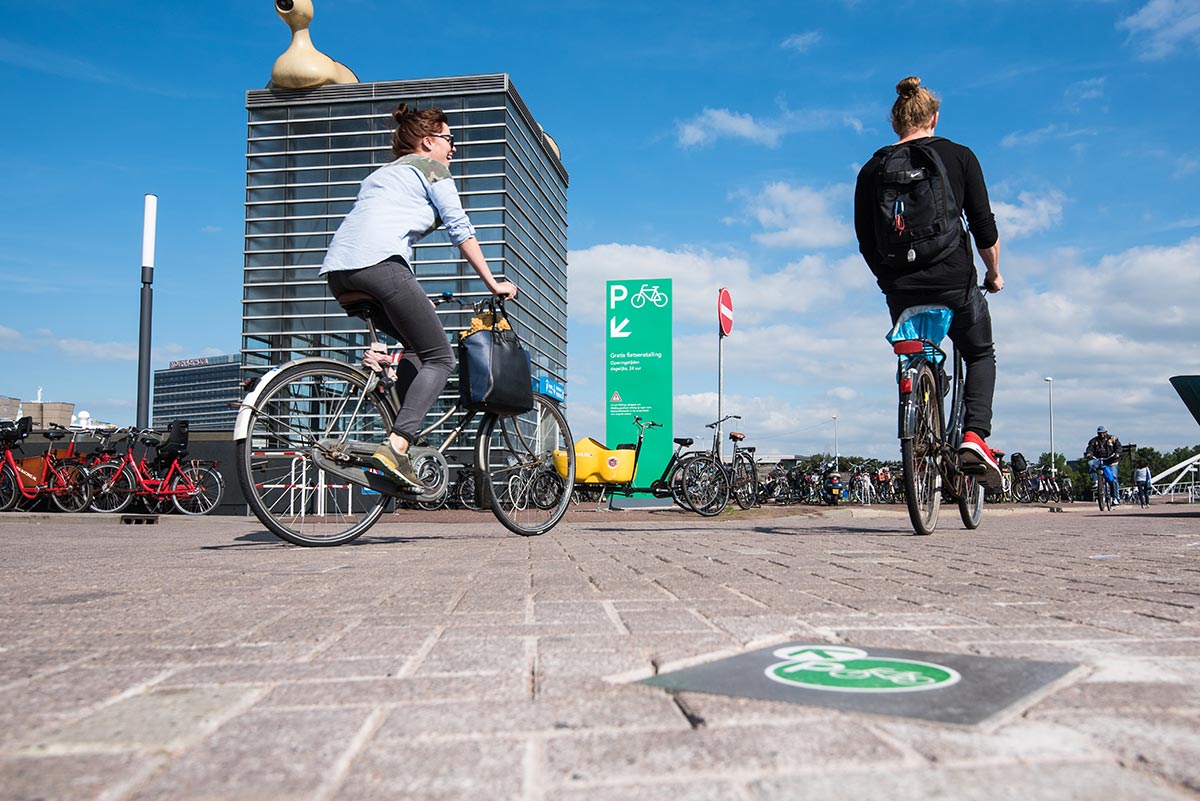 Bike parking in Amsterdam. The Silver IIID Award (Category: Traffic and Public Transports) was won with this project – © Marjolijn Pokorny

Despite what has been said above, Ikea was tough because we had to find a way of interfering with the common, one-way routing and still make it possible to browse freely in every direction. The New York airports (JFK, LaGuardia and Newark) were also a big challenge because we had to unify the wayfinding for all of about 20 different terminals where the signing, so far, had been under the control of the many operating airlines and not the owner, the Port Authority of New York & New Jersey. Yes, they were both difficult projects but what a joy to work for them and what a relief to find a successful solution!

In the examples mentioned above, the challenge was in the vast task (NY airports) and complexity of the shopping process (Ikea). An upcoming challenge is the growing demand for fewer fixed signs and to show dynamic information no longer on large TV screens but by projection onto walls and floors, for instance, so that the building – often of great historical value – remains untouched. We are working on such a ‘minimalist’ scheme at the Hermitage Museum in St. Petersburg.

One of the leading exponents of wayfinding design, he received the prestigious Piet Zwart Lifetime Achievement Award from the BNO, the Dutch Designers’ Association, in 2015. Emeritus Professor of Visual Information Design at the Technische Universiteit Delft, he is known for his ability to transform great quantities of complex information into clear, simple systems of signals. He founded Mijksenaar Wayfinding Experts, based in Amsterdam and New York, which has built an international reputation through wayfinding design in some of the largest airports in the world.