The graphic visualisation of flows

The information design tools for the analysis of the urban fabric

Interest in the study of the flows of goods and people has ancient origins. The remaining traces of the first graphs date to the 18th century, when statisticians and engineers developed representation systems, still in use today (such as bar and line graphs1), so that geopolitical and commercial trends could be understood. It has been clear since then that the use of graphic views would enable the indication of patterns, trends and relations not perceptible through rough data.

In recent years, it is becoming increasingly important for administrations and citizens to make use of tools that enable the flows crossing cities to be understood following a sudden growth in the population and the consequent increase in urbanisation2. The use of smartphones, cars and other interconnected devices generates an enormous amount of data which is available to meet this need. In addition, computers with greater and greater processing abilities and pervasive web technologies offer the opportunity to process and network complex, constantly updated graphs.

The flows relating to low environmental impact mobility are among the urban context flows most investigated by researchers and designers. The research in this field concentrates in particular on the analysis of the frequency of use, the routes followed and the time taken by public transport and car- and bike-sharing services. The visualisation systems used basically have the task of making the usage features of the means comprehensible, highlighting the external agents influencing them, like the time of day, atmospheric conditions and trends in traffic.

The Visualising MBTA Data project, developed by the engineers Mike Barry and Brian Card in 2014, is part of this line of enquiry and consists of a web page offering an overall view of the public service offered by the Boston underground. It analyses three main aspects – the times of the trains3, the flow of people in the stations and the effects generated by the relations between the two. 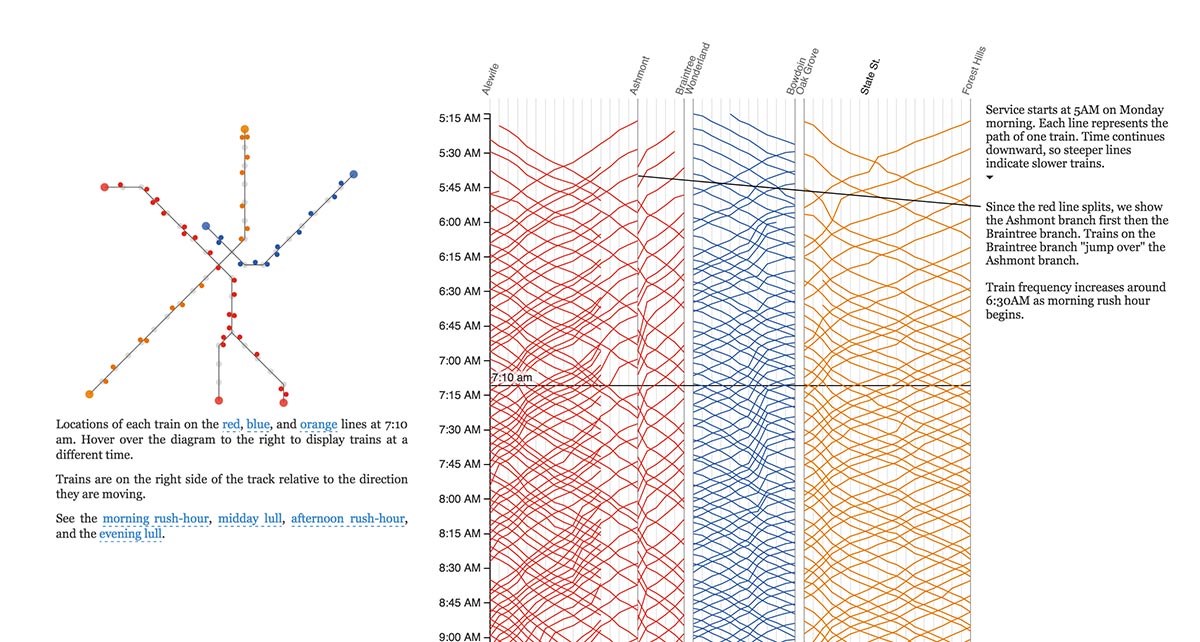 The great density of the information presented and the use of analytical representations means that the final product is mainly suitable for an expert public, underlining the delays, cancellations of trains and other critical points which can thus be understood better and resolved by the transport company.

The research project cf. city flows, also very full of information, maps the use of the bike-sharing service in three large cities worldwide and mainly targets ordinary citizens. The interactive installation was created by the visualization researcher Till Nagel and the designer Christopher Pietsch at the Urban Complexity Lab in Potsdam (Germany) in 2016. Its aim is to increase people’s interest in the use of eco-sustainable means of transport through a structured system of simultaneous representations of the flows in New York, London and Berlin. 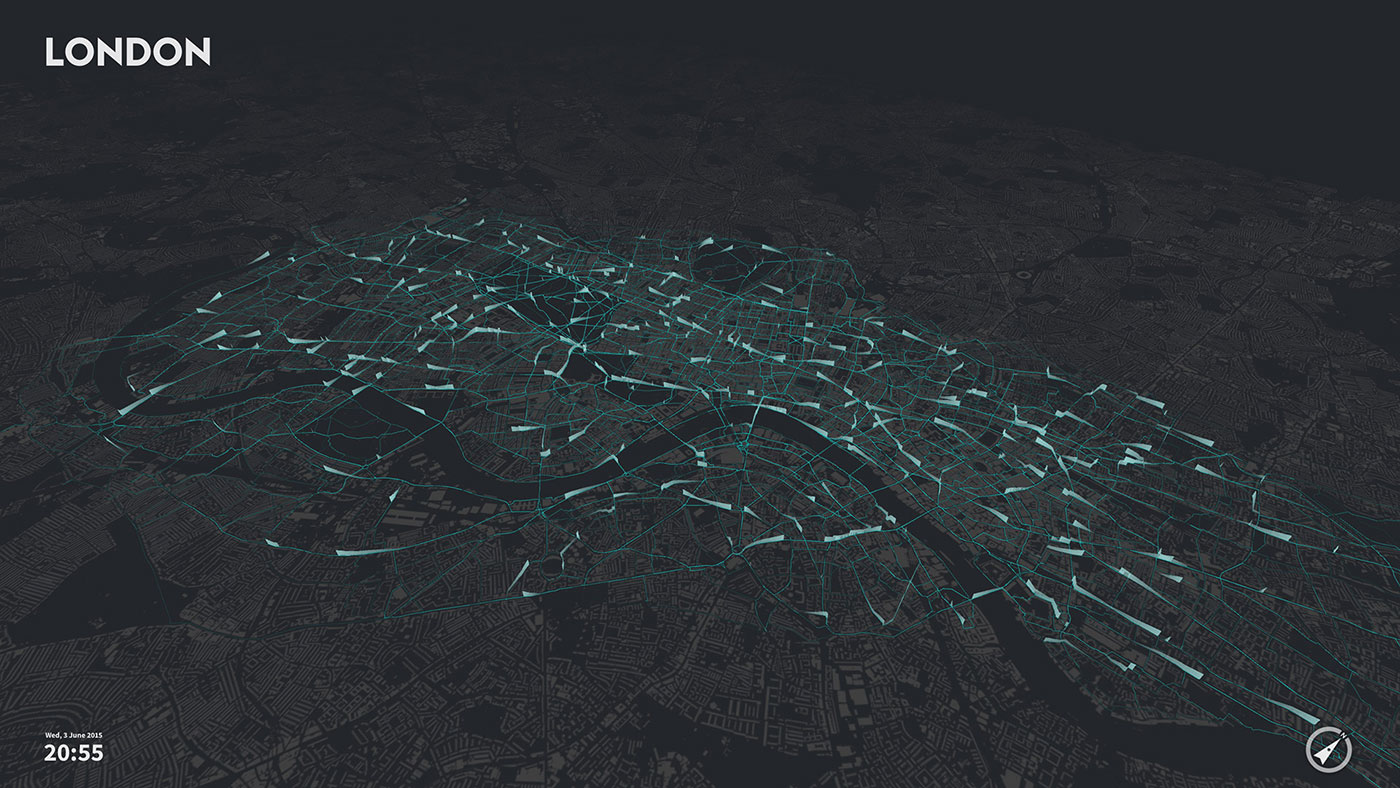 The project has three types of views – the complete map of all the routes, numerous maps of routes to and from the individual stations, and a control panel with details of the use of the public bicycles in the individual cities. The vast amount of information enables indication of the times of the greatest flow, the most attractive places and the type of user4.

An immersive approach is used for the visualisation; the observer firstly approaches the aerial maps, of great visual impact but with obvious graphic distortions; s/he is then guided towards a route of discovery of the data that is more and more precise and analytic.

Visual analysis of the flows still has great potential for expression; in detail, there is great attention to finding new visual models which can reveal the dependency between the many features of the urban panorama, and interactive supports, which can favour greater interaction with the visualisation. 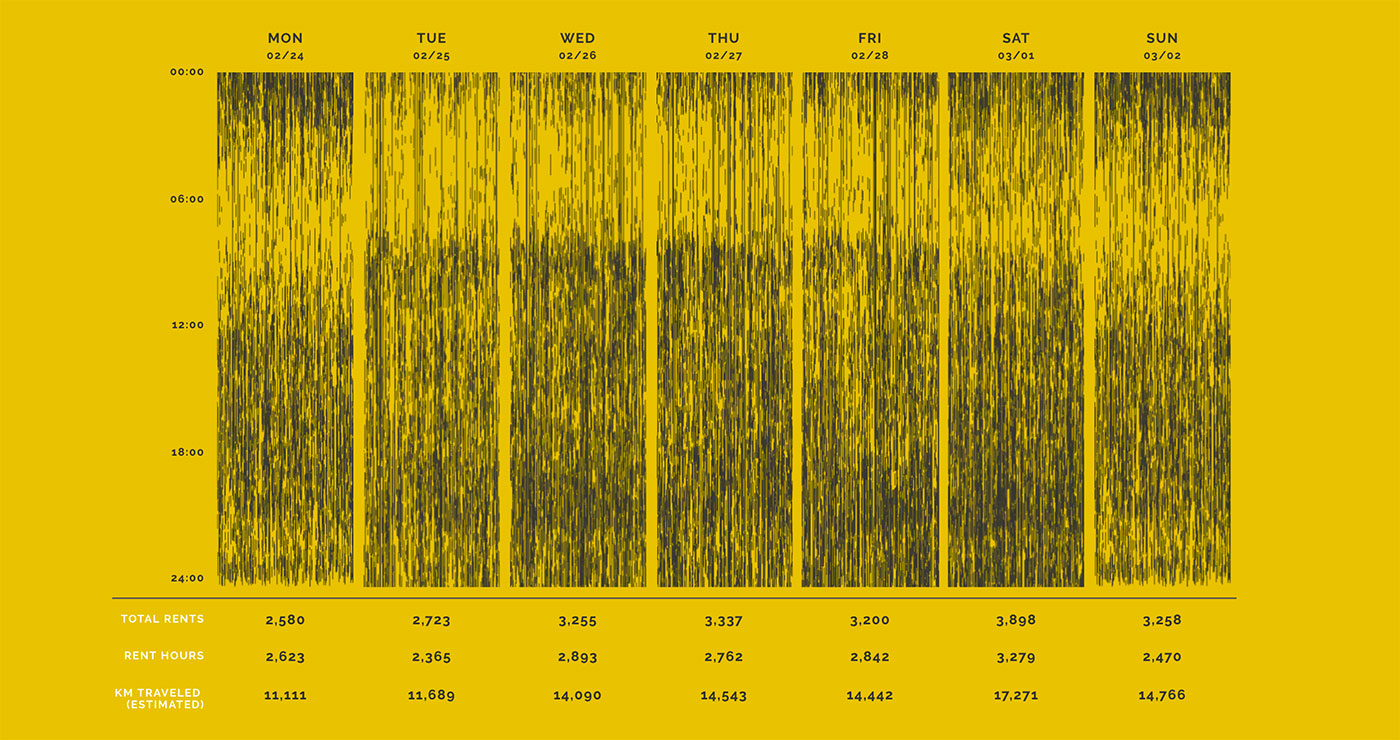 It seems that the design of the information will have a key role in the discussion on the policies for the development of the city. The intention to make ordinary people more involved in this discussion has been unveiled following the publication of many projects on web platforms and paper magazines. As a result, there is not only the growing responsibility of graphic representation professionals but also the formulation of new information aims including fears about environmental conditions in contrast with the constant development of towns, leading to the study of graphic solutions that make users more aware of their habits when moving around and encourage sustainable behaviour.

One of the biggest obstacles to achieving this type of objective is still the scarce availability of free data. Although many municipalities and transport companies have decided to release their data with free licences, and there are non-profit associations which encourage still sceptical bodies to do likewise5, the data available is still relatively limited.

However, projects like those described in this article show that the publication of data can lead to considerable advantages for the company. In particular, it can be equipped with innovative, effective visualisation systems, to understand the possible margins of improvement in the services offered and obtain great visibility through the web and other media.

Note:
1. One of the leading contributions to the data representation systems was the Political and Commercial Atlas, created by the Scottish statistician and engineer William Playfair in 1786.
2. According to the 2014 report of the United Nations, 54% of the population lives in urban areas; it is expected that this percentage will have risen to 66% in 2050.
3. The graphic representation of the underground train timetable in Boston is inspired by the Paris train timetable created by Étienne-Jules Marey in 1885.
4. There is greater use of bikes in Berlin than in London and New York. The main users of the bike sharing services are not, however, residents but tourists.
5. Open Knowledge International, the Open Data Institute and many local Open Data associations are among the associations promoting the publication of data and free information.

Giovanni Profeta is a research assistant at the Visual Culture Laboratory - Interaction Design Lab of the Scuola Universitaria Professionale della Svizzera Italiana (SUPSI - Italian Switzerland Professional University School) where he develops applied research projects in the data visualisation and interaction design context. He is currently completing his PhD in Design at the DensityDesign research laboratory of the Politecnico di Milano.