A reflection on the Italian experience

The effects of the travel experience on mobility choices

How often have we been left with a bad memory of a journey, although travelling on a fast, comfortable train or airplane, because, for example, we had to wait for a long time in unpleasant conditions in a transport terminal? The English expression for this feeling is travel experience, i.e. the perception a journey leaves on the traveller. It’s also often influenced by the quality of the modal interchange (in terminals/transport hubs) and the transport services used.

An architectural movement (Station Renaissance) started in Europe in the 1980s and then spread all over the world. It considers the importance and effects of the travel experience, aiming to satisfy the customer’s expectations in terms of the aesthetics of transport terminals, their architectural quality, integration with the landscape, accessibility and modal interchange. The movement believes that transport terminals should move from being “non-places”, whose only function is the modal interchange, to places that are clearly recognisable in the area where the passenger can spend part of their journey comfortably, perhaps even doing other things (e.g. having a meal, shopping, etc.). There are well-known examples all over the world, and also in Italy where the most representative are, perhaps, the ‘art stations’ of Line 1 of the Naples Underground or the HS railway station ‘Mediopadana’ in Reggio Emilia (a project by the architect Calatrava) and that under construction of ‘Naples-Afragola’ (a project by the architect Zaha Hadid). 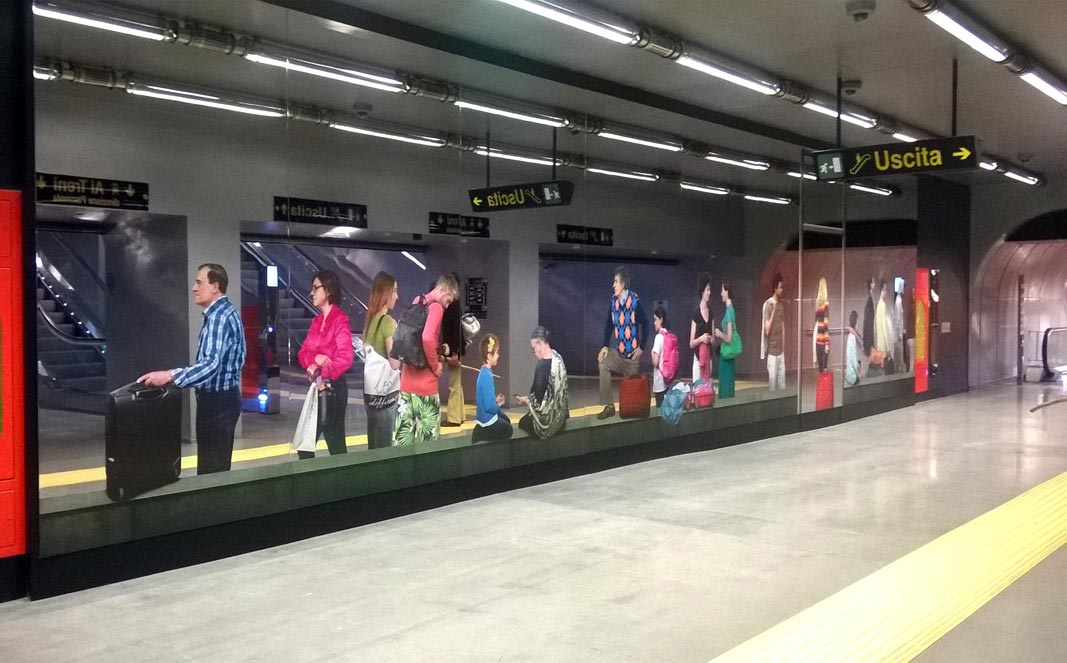 With reference to the importance of valorising transport terminals, various studies have shown how the hedonic value of a transport terminal, i.e. the quality offered in terms of aesthetics, cleanliness, security and additional services, influences not only the overall perception of the journey but also mobility choices as a whole (e.g. how many journeys to make, which services to use and how much people are prepared to pay). Looking at Italy in particular, research carried out by the Federico II University, Naples, on the art underground in Naples (published in a scientific journal in the sector1), estimated that the hedonic value (the willingness to pay) in monetary terms to use stations with a high aesthetic and architectural standard can be quantified as 40 cents of a €/trip (33% of the price of the ticket), which is equal to walking an extra 400 metres (the area of influence is about 50% larger) to reach a high quality station, or waiting up to 6 minutes longer for the arrival of a train. This effectively shows that the area of influence of a hedonic station is up to 40% greater or more townspeople consider the railway service. 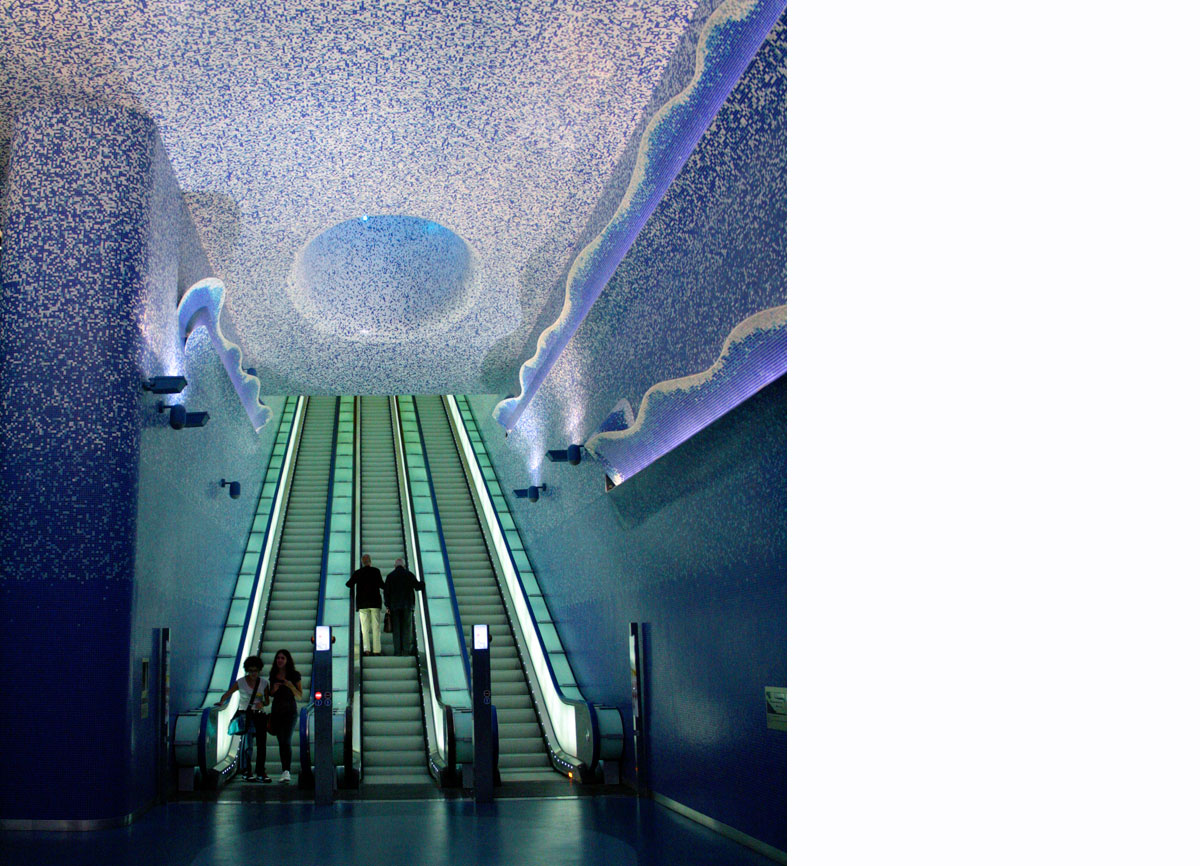 In a second study2 conducted at some of the main bus stations for extra-urban road transport in Italy, the University of Naples estimated that the hedonic value of a high quality terminal or transport service falls significantly, negating part of its utility (also reduced by 35%), if the journey to undertake involves other transfers through low quality terminals and/or services. This result is very important and highlights how policies aimed at modal integration (e.g. road-rail) could significantly increase the overall hedonic value of the whole journey with resulting direct benefits for all the users of the system (higher perceived quality), the operators involved (more passengers transported on both road and rail) and could lead to significant induced economics for the areas involved (new jobs and higher profits for the terminal managers).

Starting from these considerations, at a time in history when the national transport policy clearly points towards useful, lean and shared infrastructure (e.g. the New Code on Tenders and former Infrastructure Appendix 2016), these results seem very encouraging and lay the bases for a new season of transport design and planning, highlighting the potential which is partly comparable to what, in the past, produced the ITS technologies in transport systems. Twenty years have passed since people started to understand how technologies could increase the performance of the existing transport infrastructure in the same way as new constructions but with much lower costs. Since then, there has been increasingly widespread use of ITS in transport. Probably, one of the most visible and successful examples in Italy is the speed control system (Tutor or Safety Tutor) which has allowed not only a reduction in the number of accidents and pollution but also an increase in the capacity of existing motorways without having to increase the section (or build new ones). Today, in the same way, it would seem that, for collective transport, quality, aesthetics and services to travellers may enable comparable effects to be achieved that are additional and not replacements for those produced by new constructions (e.g. new stations or an increase in the frequency of trains) at a much lower cost (but other experimental evidence is certainly required to confirm these conclusions).
If the effect of creating more attractive, comfortable stations is to increase the traveller’s willingness to walk, the result is that fewer stations, created with high quality standards, would be needed to serve the same regional area or, better, the perceived quality and customer satisfaction with collective transport could be greatly increased with the same number of stations.

Therefore, if high quality aesthetics and services today have to become explicit variables for new transport projects in the same way as the functional ones (such as the routes of the lines, the number of stops, and the frequency and price of tickets), the modal integration policies can also bring additional benefits to the overall system through, for example, a ‘hedonic’ use of technology. Integration of the information for travellers among the methods and transport services, ticketing, e-ticketing and scheduling could increase travellers’ overall travel experience with the same infrastructure and rolling stock at very contained costs, and also with significant effects for the economies of the areas involved. However, to start this new season of transport planning, the view Italy has of collective transport passengers must first change radically so that they are increasingly seen as customers to satisfy rather than users to transport.

Researcher at the Department of Civil, Construction and Environmental Engineering, Federico II University, Naples. He has a PhD in Road Infrastructure and Transport Systems.