The contribution of Industry 4.0 to the Sharing Cities project

The approach and projects of the Municipality of Milan

The search for inclusion

Previous international projects had led me to understand how much the topic of congestion charges (payment for vehicle access to urban areas) clashes with the citizen’s assumed right to move absolutely freely with their own private means of transport. Speaking in terms of the project, a language had to be found that could be understood and perceived as sensitive and formally attentive, respectful and taking care of the citizen, doesn’t use authoritative tones but, instead, seeks a dialogue. Therefore, the project was structured in 3 moments useful in the construction of a design approach that, today, we would define as more inclusive, able to embrace and convince, not impose and force.

New Area C Milan logo-brand
A first series of reflections about the name were shared with Aldo Cernuto, publicist and copywriter, and the Transport Councillor Diego Maran. An Area C technicist was chosen in which the C was deliberately basically ambiguous – Centre for some, Congestion for others – and Ceppi for my friends.
The new Area C logo-brand was intended from its very beginning to be a sign able to transmit a fundamental value like the decongestion of traffic and urban quality in a friendly, narrative way – not a sign that shouts but talks and interacts.
The aim of improving the liveable quality of Milan city centre and returning it to the city was emphasised by the graphic choice of the outline of the Milanese ramparts as an explicit leading feature visually. The tertiary colours push towards green/yellow and brick red, don’t interfere with any colour element of the Highway Code and are dynamic perceptually with two fresh, vibrant colours that reiterate once again the concepts of eco-sustainability upstream of the process.

Example of localisation of the passages created with digital printing

All the material has compliance certifications for colour and photometry and responds to the European Technical Specification for visual services. 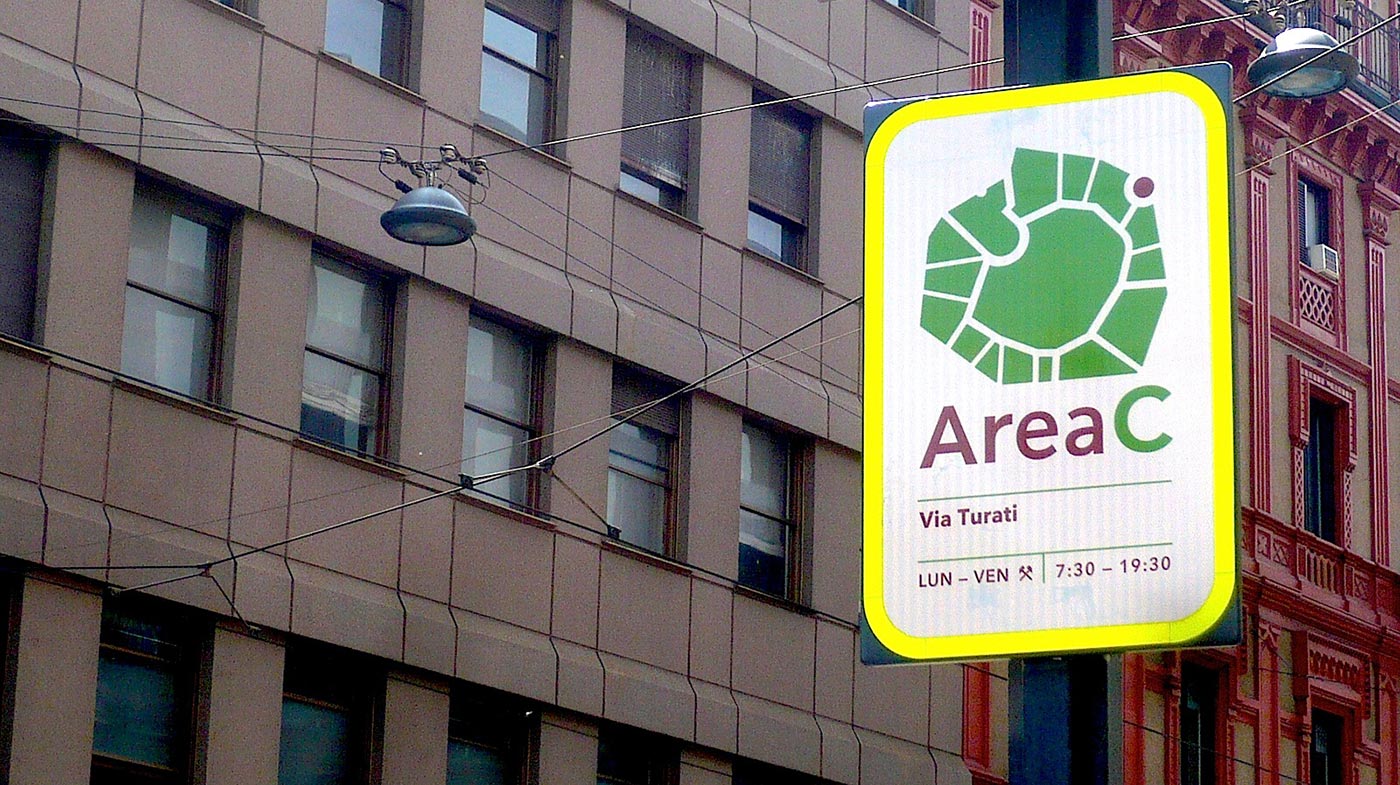 Awareness-raising campaign for Area C Milan
As mentioned at the beginning, we understood very well that no matter how friendly and innovative, a technical communication system wasn’t the only useful channel for creating acceptance and welcome in an administratively and socially complex process like that of the congestion charge. A light, ironic awareness-raising campaign, which tried to create an additional exchange with the citizen, making him/her a participant in a choice apparently counter-productive for the individual, was needed.
And we know that, in a country like Italy, putting We before Me is never an easy task.

So Aldo Cernuto (Cernuto-Pizzigoni & Partners) devised an awareness-raising campaign made of urban billboards and radio announcements, following a plan shared with the Municipal Council and supported by ATM, the Milanese public transport company. It was no accident that public transport vehicles were the main physical carriers of the campaign, also found in the stations of the Milanese underground, to emphasise the environmentally virtuous, honourable choice of using means of collective transport.

The billboard campaign played on the ‘pay-off’ ‘C sarà meno traffico’ (There’ll be less traffic), rather than ‘C metti meno tempo’ (You’ll take less time), trying to make the citizen think about the positive benefits of the system, always being almost ironic about that ambiguous ‘C’ and stressing that Milan, the city par excellence of doing and moving, would, in turn, have moved better (‘Milano si muove meglio’).
A series of hangers inside public transport stated that ‘C voleva un cambiamento’ (A change was needed), trying to transmit the value of the environmental innovation introduced by Area C. The radio campaign, which also played on the ambiguous theme of the ‘C’ (‘C vediamo in centro’ – See you in the centre) as the spoken translation of the collective ‘ci’ (we), won the prize for the best radio campaign in 2012.

Inclusive, rather than inconclusive, conclusions
When we planned the visual system around Area C, we hoped that the sign would become part of the identity heritage of Milan and, in particular, that, in time, it would be accepted and adopted almost with pride by the people who renewed a social pact for the environment and the urban community.
The Area C project obtained important awards and stimulated the advertising campaigns of leading car manufacturers; there have been jokes about it and it has been demonised and there have been viral developments and uncontrollable transformations. Perhaps this means that, anyway, a little of Area C has also grown inside all of us, which is what we wanted to happen.

Architect and designer, he teaches at the Politecnico di Milano. He is concerned with sensory design and materials design, the development of new technologies and identity strategies. He founded Total Tool, a visioning and design strategy company with offices in Milan, Tokyo and Buenos Aires, in 1999. He has held workshops and conferences in more than 25 countries and written various essays on project design and culture.